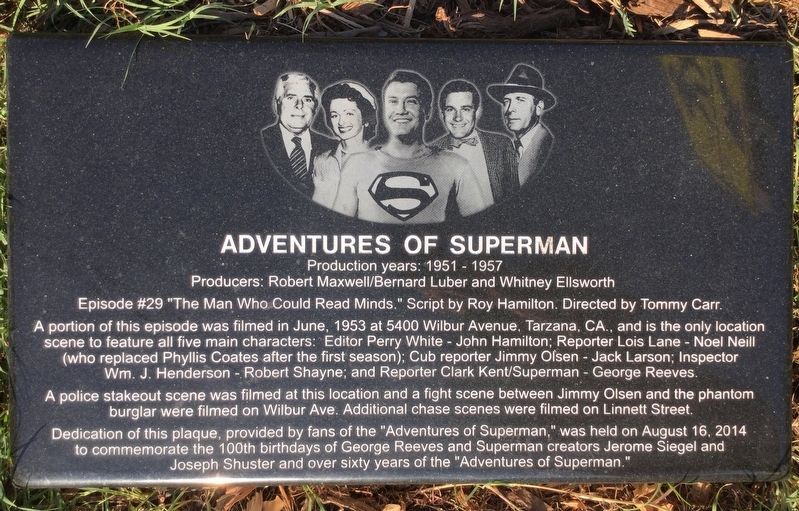 By Craig Baker, October 29, 2018
1. Adventures of Superman Marker
Inscription.
Adventures of Superman. . . Production years: 1951 - 1957. Producers: Robert Maxwell/Bernard Luber and Whitney Ellsworth. Episode #29: “The Man Who Could Read Minds." Script by Roy Hamilton. Directed by Tommy Carr. . A portion of this episode was filmed in June, 1953, at 5400 Wilbur Avenue, Tarzana, CA, and is the only location scene to feature all five main characters: Editor Perry White - John Hamilton; Reporter Lois Lane - Noel Neill (who replaced Phyllis Coates after the first season); Cub reporter Jimmy Olsen - Jack Larson; Inspector Wm. J. Henderson - Robert Shayne; and Reporter Clark Kent/Superman - George Reeves. . A police stakeout scene was filmed at this location and a fight scene between Jimmy Olsen and the phantom burglar were filmed on Wilbur Ave. Additional chase scenes were filmed on Linnet Street. . Dedication of this plaque, provided by fans of the "Adventures of Superman," was held on August 16, 2014, to commemorate the 100th birthdays of George Reeves and Superman creators Jerome Siegel and Joseph Shuster and over sixty years of the "Adventures of Superman ". . This historical marker was erected in 2014 by Fans of the “Adventures of Superman”. It is in Tarzana in Los Angeles County California

A police stakeout scene was filmed at this location and a fight scene between Jimmy Olsen and the phantom burglar were filmed on Wilbur Ave. Additional chase scenes were filmed on Linnet Street. 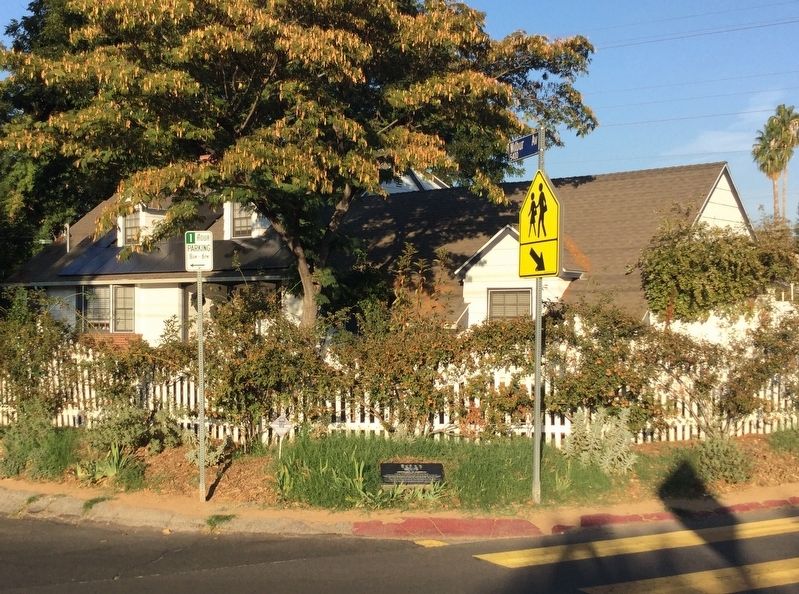 Click or scan to see
this page online
2014 by Fans of the “Adventures of Superman”.

Topics. This historical marker is listed in these topic lists: Arts, Letters, Music • Entertainment. A significant historical month for this entry is June 1953.

Location. 34° 10.12′ N, 118° 32.68′ W. Marker is in Tarzana, California, in Los Angeles County. Marker is at the intersection of Wilbur Avenue and Linnet Street, on the left when traveling south on Wilbur Avenue. Touch for map. Marker is at or near this postal address: 5400 Wilbur Ave, Tarzana CA 91356, United States of America. Touch for directions.

More about this marker.
The marker lays flat on the lawn, near the street corner.

Jack Larson, who played Jimmy Olsen, was among those who attended the marker dedication in 2014.