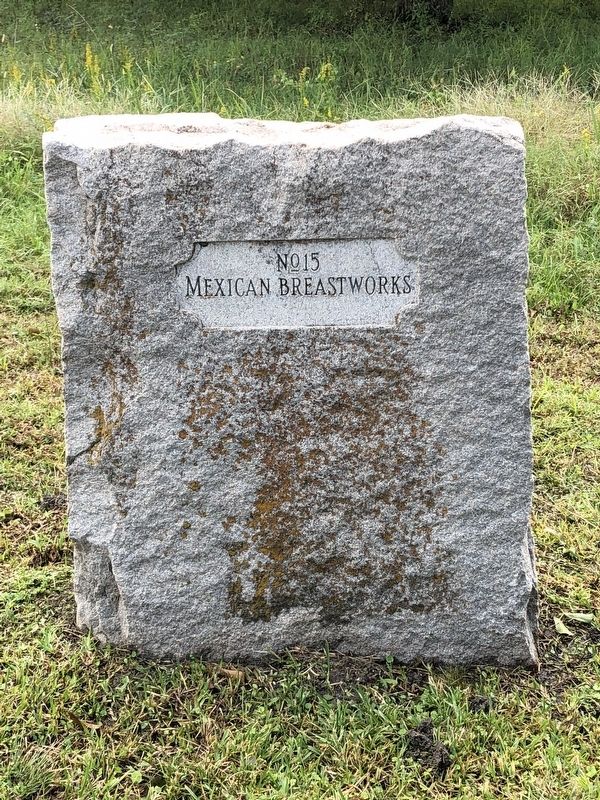 Erected 1912 by San Jacinto Chapter, Daughters of the Republic of Texas. (Marker Number 15.)

Location. 29° 44.871′ N, 95° 4.638′ W. Marker is near La Porte, Texas, in Harris County. Marker is at the intersection of Park Road 1836 and an unnamed Park Road, on the left when traveling west on Park Road 1836. Marker is located within the San Jacinto Battleground State Historic Site. Touch for map. Marker is at or near this postal address: 3523 Independence Parkway, La Porte TX 77571, United States of America. Touch for directions.

Other nearby markers. At least 8 other markers are within walking distance of this marker. Santa Anna's Camp (within shouting distance of this marker); Mexican Cannon (about 300 feet away, measured in a direct line); Houston Wounded (about 500 feet away); a different marker also named Mexican Breastworks (about 600 feet away); San Jacinto Monument (approx. ¼ mile away); Sherman's Advance (approx. 0.3 miles away); Mexican Position (approx. 0.4 miles away); Almonte Captured (approx. 0.4 miles away). Touch for a list and map of all markers in La Porte.

More about this marker. In 1912, the San Jacinto Chapter of the Daughters of the Republic of Texas placed a series of 20 stone markers to commemorate key points on the battlefield. This marker is number 15 in that series.