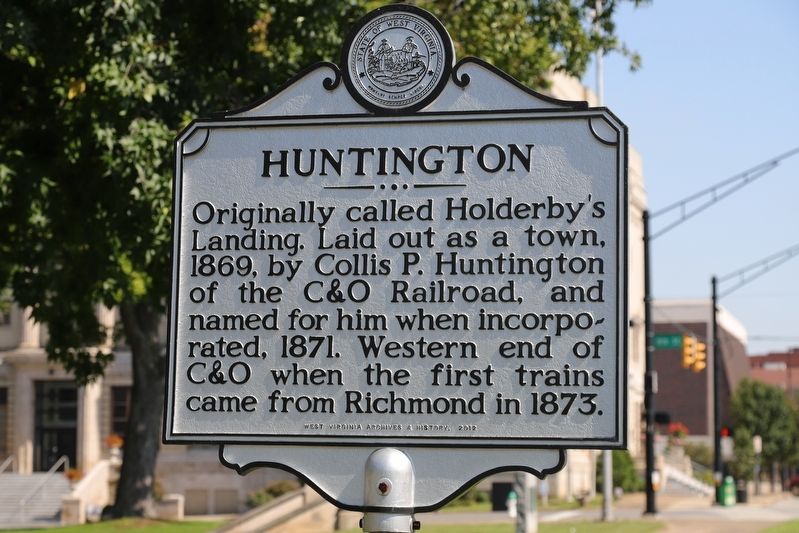 By J. J. Prats, September 29, 2018
1. Huntington Marker
Inscription.
Huntington. . Originally called Holderby’s Landing. Laid out as a town, 1869, by Collis P. Huntington of the C&O Railroad, and named for him when incorporated in 1871. Western end of C&O when the first trains came from Richmond in 1873. . This historical marker was erected in 2012 by West Virginia Department of Archives & History. It is in Huntington in Cabell County West Virginia

Originally called Holderby’s Landing. Laid out as a town, 1869, by Collis P. Huntington of the C&O Railroad, and named for him when incorporated in 1871. Western end of C&O when the first trains came from Richmond in 1873.

Topics and series. This historical marker is listed in these topic lists: Political Subdivisions • Railroads & Streetcars. In addition, it is included in the West Virginia Archives and History series list. A significant historical year for this entry is 1869. 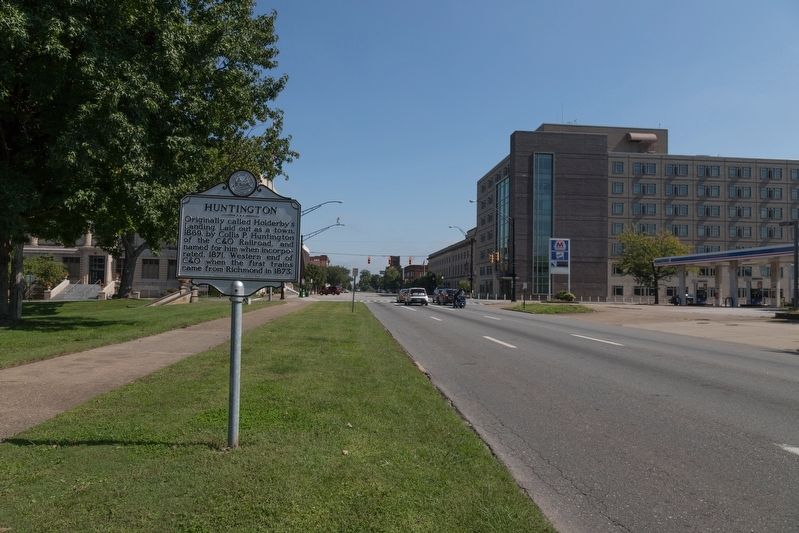 Additional commentary.
1. An important passenger train facility
By 1925 Huntington was a major stop for Chesapeake and Ohio long distance trains from New York, Washington, Newport News and Richmond to Cincinnati, Louisville, Chicago and St. Louis. Because of the terrain, they were not the fastest trains from, say, Washington to Chicago, but they held their own because they were well-known for their service and comfort. Using December 1925 timetables here are the trains that stopped at Huntington, West Virginia

Westbound train No. 1, The West Virginian, left the seaport of Newport News Virginia at 5 PM and also left Washington at 2 PM, combining into one train in Charlottesville Virginia at 5:15 PM. It reached Huntington at 8:05 AM the next day and continued to Cincinnati 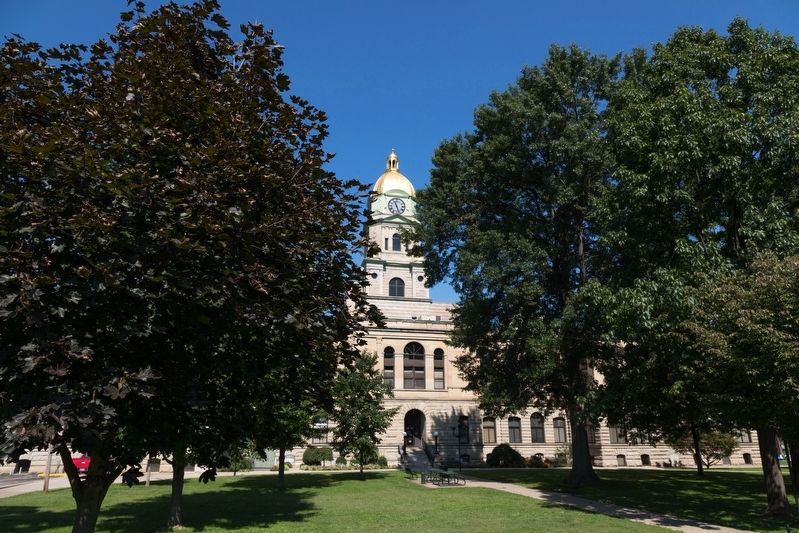 Eastbound train No. 2, The F. F. V. (for Fast Flying Virginian) left Cincinnati at noon, reaching Huntington at 4:35 PM. The train split in Charlottesville with one section continuing on to Richmond and Newport News, arriving at Newport News at 11:33 AM the next day; and the other section arriving in Washington at 7:40 AM. Distance from Cincinnati to Washington on C&O tracks in 1925 was 665 miles, and this train took 23 hours to travel that distance, including station stops and engine changes. The math works out that The F. F. V. flew at an average of 29 miles per hour, typical for a train pulled by steam locomotives traversing the curves and climbs through the Allegheny Mountains.

Today’s Amtrak train No. 90, the Cardinal, makes the Cincinnati to Washington run on mostly the same route as the C&O Trains in about 15¼ hours, averaging 40 miles an hour. The Cardinal track length is now 603 miles due to new more direct trackage and diesel engines that don’t need to be watered and changed out.

There is only one Amtrak train in each direction on former C&O tracks today, but the C&O had more, in order to provide multiple arrivals and departures throughout the day. Westbound train No. 3, also called The F. F. V., has cars that originated in New York at 5:45 PM bound for Louisville

Via the Library of Congress, 1873
4. Chesapeake and Ohio Railroad Map
Click on image to enlarge, then click it again to zoom in.
Kentucky and Cincinnati and cars that left Richmond at 11:15 PM bound for Louisville. The two sections combined in Charlottesville at 2:20 AM stopping in Huntington at 1:15 PM where the Louisville cars were transferred another train, arriving there at 8:25 PM. The F. F. V. continued on to Cincinnati, arriving at 5 PM.

Train No. 4, the Old Dominion Limited, Originated in Cincinnati, leaving at 9 PM. It carried passenger cars from Chicago to Newport News that had started their trips at 1 PM that day. Meanwhile sleeping cars from Louisville set out for Huntington at 6 PM en route to Washington. When the Old Dominion Limited arrived in Huntington at 1:30 AM, they would be added to the train. In Charlottesville at 1 PM the train would be split in two, with one section continuing on C&O tracks to Newport News, arriving at around 6 PM and the other continuing on to Washington and New York on Southern Railway tracks to Washington, and then Pennsylvania Railroad tracks to New York. Arrival in Washington was 4:15 PM and New York at 11:10 PM.

Train No. 5 was called the Mid-West Limited originating as two separate trains in Washington and Newport News at 2 PM and 10 AM, combining into one train in Charlottesville at 5:15 PM and stopping at Huntington at 4 AM, where the New York to Louisville sleeping car would be carefully separated from the 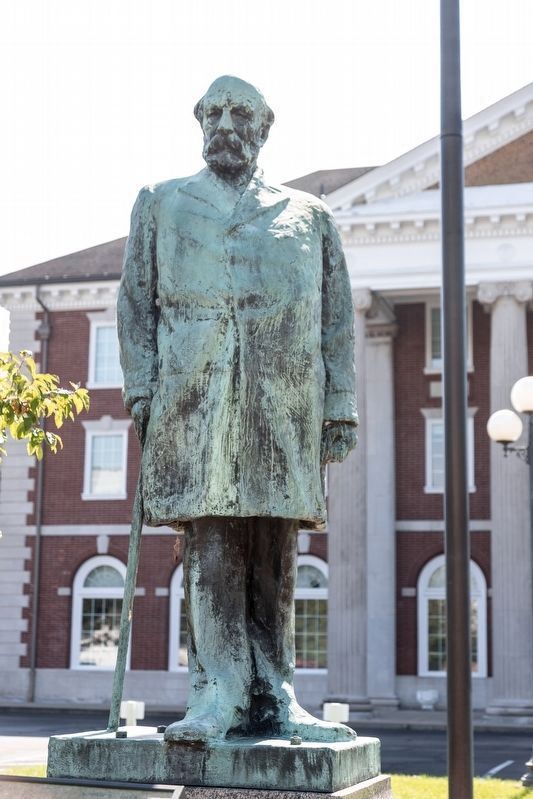 1924 bronze by Gutzon Borglum, Photograph by J.J. Prats, September 29, 2018
5. Collis P. Huntington (1821–1900)
Statue is 8 feet tall on a 46 inch base. It is in the plaza in front of the former C&O Railroad station on 7th Avenue.
train to avoid waking up its passengers and sent on its way to Louisville, arriving there at 11:15 AM. Train No. 5 itself would arrive in Cincinnati at 9 AM, where cars to Chicago and St. Louis would continue on separate trains, arriving in those cities at 5 and 6 PM respectively.

The final named train passing through Huntington was C&O train No. 6, the Resort Special, that ran westbound arriving Huntington 35 minutes after noon. It had originated in Cincinnati at 7:50 that morning and had sleeping cars bound for Washington and New York. An additional sleeping car was added in Huntington bound for Richmond. At 7:25 PM at the White Sulphur Springs resort owned by the C&O, it would pick up one or more sleeping cars destined for New York. Its sleeping car passengers could enjoy a late sitting in the dining car before retiring for the night. Train No. 6 would not split at Charlottesville at 10 minutes to midnight, but it would drop off the Richmond sleeper and continue on its way to Washington and New York. In Washington at 3:30 AM the Washington Sleepers would be cut off and left on a platform without disturbing the sleeping passengers, who would not be asked to disembark until 7:30 AM. The sleepers to New York would arrive there at 9:15 AM.

In addition to these six named trains, six local trains ran to or through Huntington. The station was busy at all hours 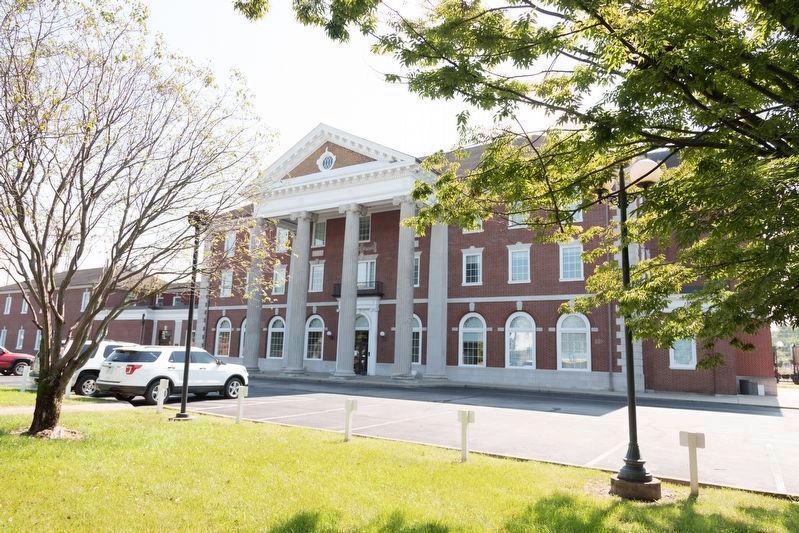 By J. J. Prats, September 29, 2018
6. The Former Huntington C&O Station on 7th Avenue
Today an office building for CSX Transportation, the successor railroad to the C&O.
of the day with trains arriving and departing at 3:00, 4:00, 5:15, 6:20, 7:30 and 8:05 AM and 12:45, 1:15, 1:45, 2:25 5:45 and 6:00 PM. Some of these local trains that ran at night also carried sleeping cars. In 1925 timetables showed Pullman sleeping cars between Cincinnati and Charleston West Virginia, between Charleston and Pittsburg via Wheeling, and between Richmond and Louisville. C&O also carried sleeping cars between other points on their lines that did not include Huntington, such as between Charleston and Bluefield on the WV/VA border, between Chicago and Muncie Indiana, and between Louisville and Ashland Kentucky.

Huntington was a significant passenger train facility during the heyday of train travel in the 20th century. There were many hotels convenient to the C&O station for those passengers with business or pleasure in Huntington and for those who wanted to break their journey.
— Submitted November 8, 2018, by J. J. Prats of Powell, Ohio. 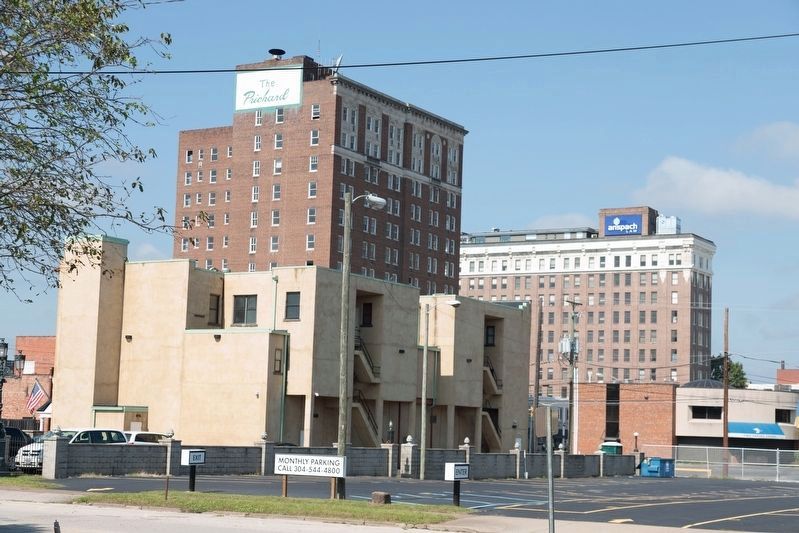