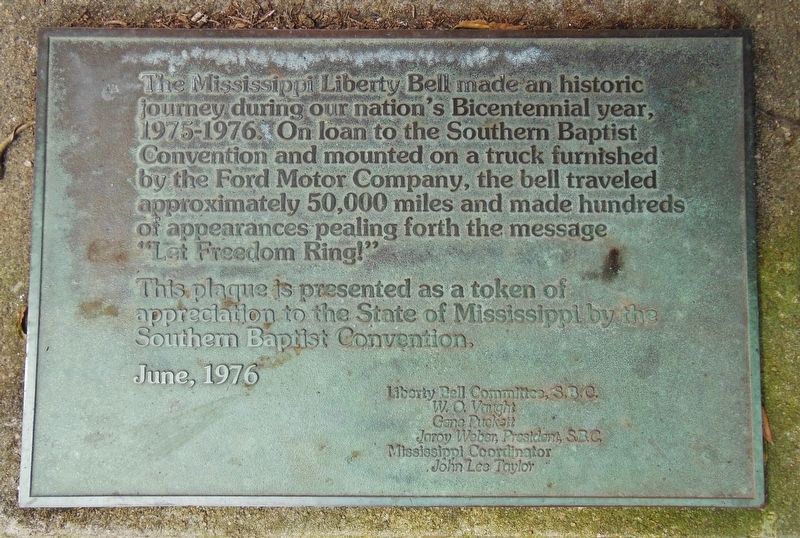 The Mississippi Liberty Bell made an historic journey during our nation’s Bicentennial year, 1975-1976. On loan to the Southern Baptist Convention and mounted on a truck furnished by the Ford Motor Company, the bell traveled approximately 50,000 miles and made hundreds of appearances pealing forth the message “Let Freedom Ring!”

This plaque is presented as a token of appreciation to the State of Mississippi by the Southern Baptist Convention
June, 1976

Erected 1976 by the Southern Baptist Convention.

Topics and series. This historical marker is listed in these topic lists: Notable Events • Patriots & Patriotism. In addition, it is included in the Historic Bells, and the Liberty Bell Replica series lists. A significant historical year for this entry is 1976. 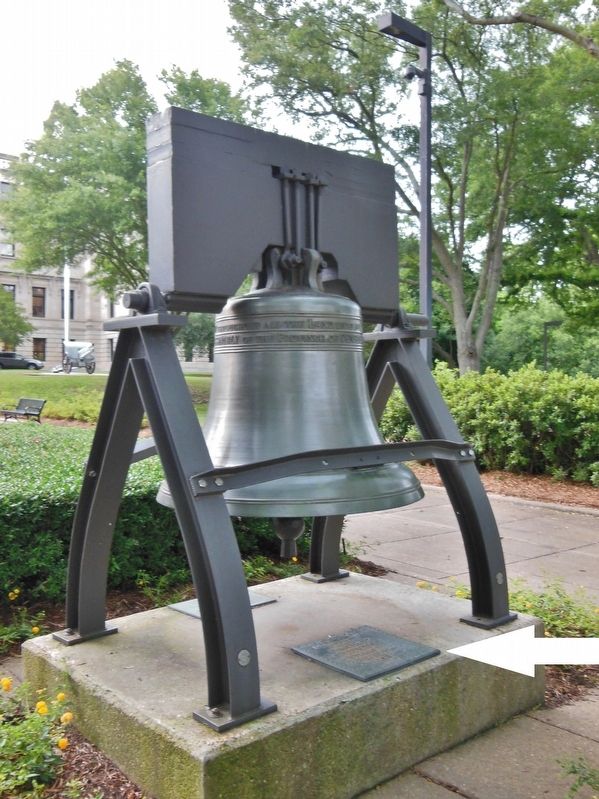 Click or scan to see
this page online
County. Marker can be reached from the intersection of Mississippi Street and North Congress Street, on the right when traveling east. Marker and Liberty Bell Replica are located in the center of the broad walkway that approaches the Mississippi State Capitol from the south. Touch for map. Marker is at or near this postal address: 400 High Street, Jackson MS 39201, United States of America. Touch for directions.

More about this marker. Marker is a large metal plaque, mounted at the base of Mississippi's Liberty Bell replica.

Also see . . .  Liberty Bell replicas. In 1950, the foundry was selected by the U.S. Department of the Treasury to cast fifty-five full-size Liberty Bell replicas – one for each state plus U.S. territories, to place on the capitol grounds of each state. Foundry craftsmen measured each feature and dimension of the original Liberty Bell to create fifty-five authentic replicas for the U.S. Treasury Department. (Submitted on November 11, 2018, by Cosmos Mariner of Cape Canaveral, Florida.) 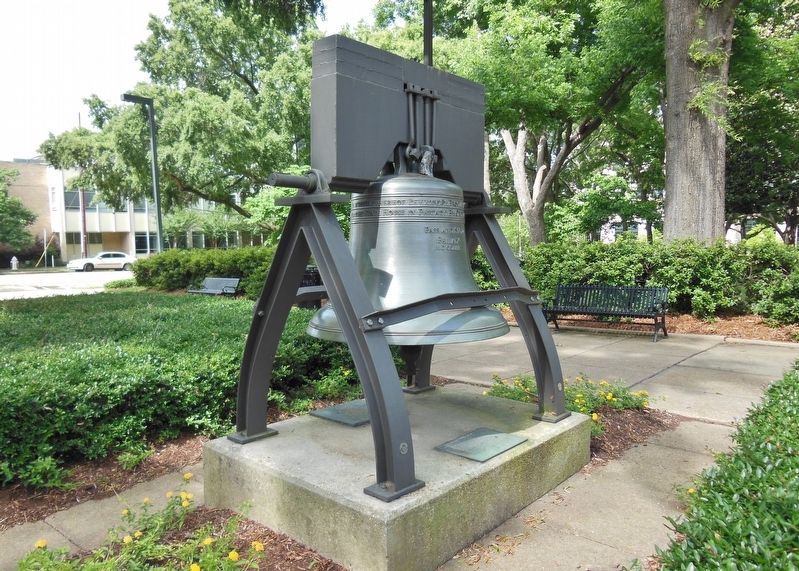 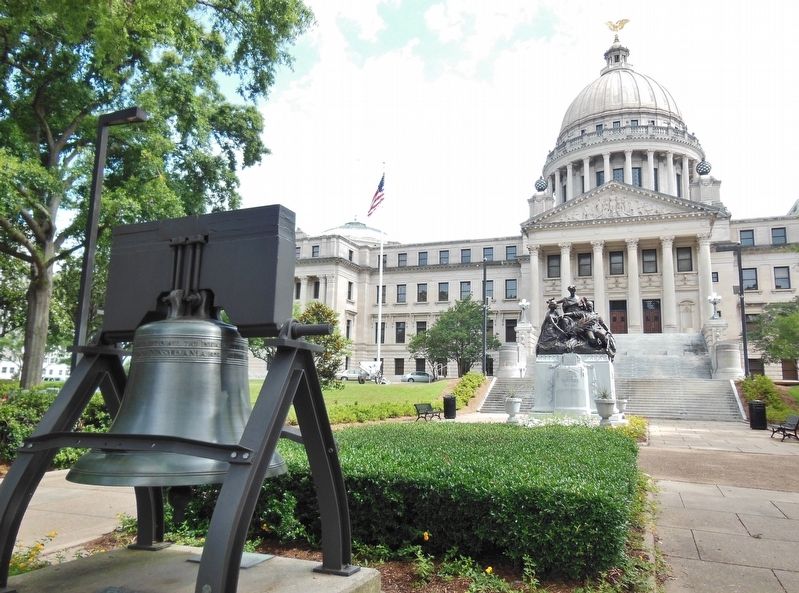 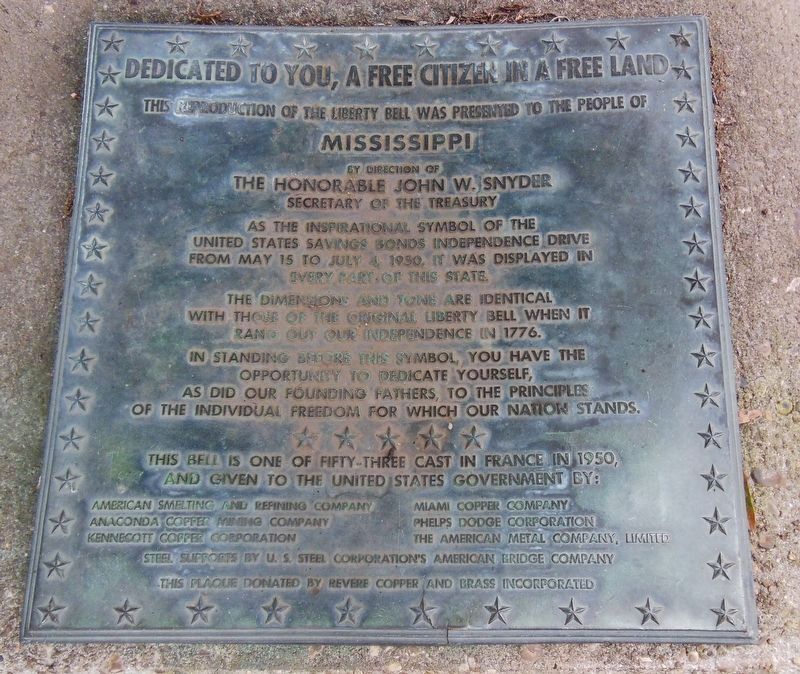 Photographed By Cosmos Mariner, May 30, 2013
5. The Mississippi Liberty Bell Dedication Plaque (also mounted on Liberty Bell Replica base)
Dedicated to You, A Free Citizen in a Free Land
This reproduction of the Liberty Bell was presented to the people of
Mississippi
by direction of
The Honorable John W. Snyder
Secretary of the Treasury

As the inspirational symbol of the
United States Savings Bonds Independence Drive
from May 15 to July 4, 1950. It was displayed in
every part of this state.

The dimensions and tone are identical
with those of the original Liberty Bell when it
rang out our independence in 1776.

In standing before this symbol, you have the
opportunity to dedicate yourself,
as did our Founding Fathers, to the principle
of the individual freedom for which our nation stands.