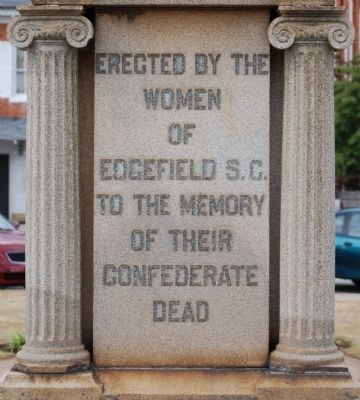 Erected by the
Women
of
Edgefield, S.C.
to the Memory
of their Confederate
Dead.

Topics. This historical marker and monument is listed in these topic lists: Military • War, US Civil. 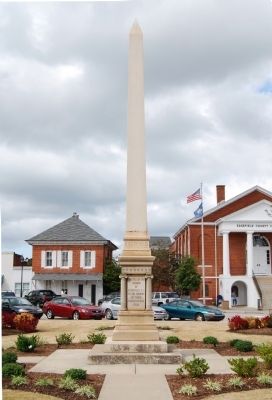 Additional commentary.
1. Edgefield County Confederate Monument
Almost immediately after the close of the War Between the States, the women of Edgefield planned to build a monument to commemorate the deeds of Edgefield's soldiers. Lucy Holcombe Pickens, widow of war-time Governor Francis Pickens, was president of both the Ladies' Memorial Association of Edgefield and the Maxcy Gregg Chapter, U.D.C., of Edgefield. By 1897, these two organizations, with help from the Confederate Veterans of Edgefield and the town council, had raised the $1600 needed and had chosen a site for the monument.

After the death of Lucy Pickens, Victoria Gary Evans, widow of Brigadier General Nathan George Evans, became president of the Maxcy Gregg Chapter. Under her administration, the women completed the work and planned the dedication. The U.D.C. originally scheduled the dedication for August 8, 1900. For some unknown reason, 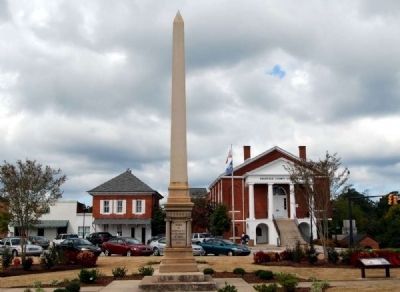 At 11:30 a.m., the procession formed at the Episcopal Church and made its way to the town square. About 2,500 to 3,000 people, including many veterans, attended. The speaker's stand was decorated in red, white, and blue streamers, evergreens, and flowers. Nathan George Evans, a prominent Edgefield lawyer, commanded the Edgefield Hussars and introduced the speakers. The South Carolina Coeducational Institute Band provided music. General Matthew Calbraith Butler, "one of the most illustrious of the old guard speaking for his comrades," gave the opening remarks. He said, "Ladies of the Edgefield Memorial Association: After years of patient toil and effort, you have accomplished the object so near to your hearts, the erection of a monument on this historic public square to the soldiers of the Confederacy from Edgefield; and we have met today to unveil it." Twenty young ladies surrounded the monument as two of them drew the cords to unveil it. The rest of the ladies placed wreaths around its base. General Butler then completed his address. He commented on the monument's simple inscription, which records neither the names of Edgefield's Confederate dead not the long verse and prose seen on most other monuments of this size. "Its simplicity and durability," he said, "illustrate the rugged unaffected courage and valor of Edgefield's 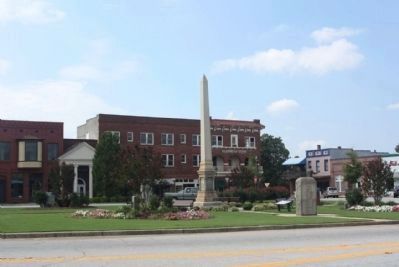 Photographed By Mike Stroud, 2011
4. Edgefield County Confederate Monument, at Courthouse Square
Confederate soldiers." Edgefield lawyer and former Governor John C. Sheppard also spoke. He recalled the day he stood on the same square -- a boy of about ten -- and watched the Secessionist flag being raised. The Honorable Jasper W. Talbert, Edgefield's U.S. Congressman, also spoke. He praised the sacrifice of the rank-and-file Confederate soldier. each of th speakers praised the ladies for their efforts in erecting the monument. A.S. Tompkins accepted on behalf of the ladies.

The monument is a thirty-two-foot gray granite obelisk designed by local U.D.C. members and manufactured by Alexandria, Virginia Marble Works. The monument was placed originally at the head of Main Street at the entrance to the square on the eastern side. In 1924, the town council decided to pave the streets of Edgefield, leaving a small park in the center of town. "...[I]t was found almost necessary to move the monument to the center of this park so as to restore its original dignity, for being at the corner of the park, outside the curbing, the park had an unbalanced look and monument had lost the symmetry and grace of its original surrounding."

Throughout the early summer of 1924, the town council, townspeople, and Daughters of the Confederacy debated the move. In July, Helen S. Nicholson, president of the Edgefield Chapter, U.D.C., called a meeting of the members of both the U.D.C.

South Carolina Postcards: West Central Carolina Aiken to Saluda, Volume 3 by Howard Woody, 1910
5. Edgefield Public Square
Confederate Monument in Original Location
and the Ladies' Memorial Association. After several hours of discussion, the women unanimously approved the move. The construction crew doing the paving moved the monument on August 15, 1924, to its present location. A contemporary photograph from the dedication ceremony in 1900 shows that the monument was originally located about 100 feet away. (Source: A Guide to Confederate Monuments in South Carolina: "Passing the Silent Cup" by Robert S. Seigler (1997), pgs 301-303.)
— Submitted January 3, 2010, by Brian Scott of Anderson, South Carolina. 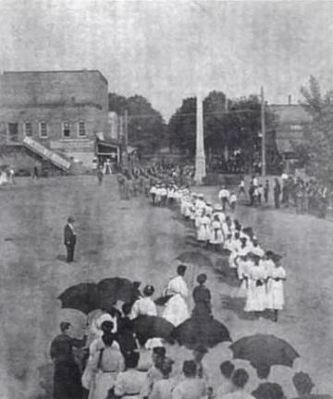 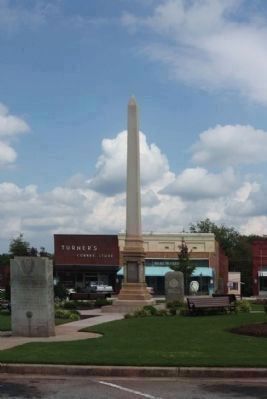