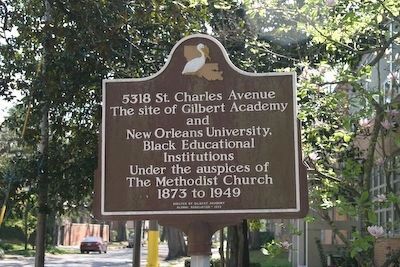 5318 St. Charles Avenue
The site of Gilbert Academy
and
New Orleans University,
Black Educational
Institutions
Under the auspices of
The Methodist Church
1873 to 1949 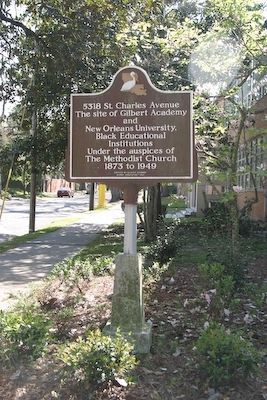 When Gilbert Academy opened its doors in New Orleans as the elite school for young black students seeking college preparatory education, it had come a long way from its modest beginning as a colored orphanage.

In 1863 when the country was in the midst of the Civil War many children were left orphaned when their parents went away to fight. The tragedy was particularly hard for black children, because there were no orphanages established for them. The Colored Orphans Home was established to take care of these children.

Louise DeMortie, a free woman of color from Virginia, was sensitive to the plight of the children and relocated to Louisiana to help run the Colored Orphans Home. She became one of the primary forces behind securing adequate accommodations for the orphanage. Her efforts were successful when she secured a building to house the orphanage, a large mansion on Esplanade that had been abandoned during the war.

Racial tension and resentment forced them to have to move out of the former confederate mansion after the war, however. DeMortie began to raise money and with the help of the Methodist church, the orphanage was relocated to Baldwin, Louisiana in 1867.

The home started to accommodate the children's educational needs and in 1875 opened a seminary on the same campus in Baldwin. The La Teche Seminary was the name given to the orphanage school and the neighboring higher educational facility.

The school complex continued to grow in spite of funding problems and had plans to continue operating until a hurricane in the late 1870s devastated the already financially strapped school and orphanage.

At that point the seminary was forced to close because of the financial difficulties. State support had been denied the school and during this economically depressed period, private support was scarce.

A bright spot came in the early 1880s however when a wealthy philanthropist from Connecticut, W. L. Gilbert, gave the school $5,000 to rebuild the campus. He later contributed another $5,000 for a building that was named Gilbert Hall and in his will donated another $40,000 to the school.

A few years later in 1884, after the campus reopened, it was renamed Gilbert Academy in honor of his support.

After more than 60 years in Baldwin, Louisiana the school was relocated to New Orleans in 1935. Gilbert Academy occupied a site vacated by New Orleans University on St. Charles Avenue for the next decade.

Gilbert Academy had grown from being an orphanage for black children from the Civil War period to the premier private school for blacks in the city.

After World War II, Gilbert was sold in 1949. The school was closed and eventually torn down. The needs of the community had begun to shift as public high schools for blacks had become available such as McDonogh 35 and later Booker T. Washington.