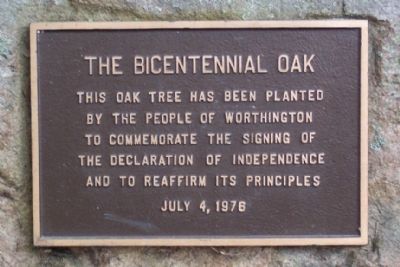 This oak tree has been planted by the people of Worthington to commemorate the signing of the Declaration of Independence and to reaffirm its principles
July 4, 1976

Erected 1976 by People of Worthington.

Topics and series. This historical marker is listed in these topic lists: Notable Events • Patriots & Patriotism. In addition, it is included in the The Spirit of ’76, America’s Bicentennial Celebration series list. A significant historical date for this entry is July 4, 1976.

Location. 40° 5.359′ N, 83° 1.054′ W. Marker is in Worthington, Ohio, in Franklin County. Marker is on Village Green Drive NE, 0 miles north of Dublin-Granville Road (Ohio Route 161), on the right when traveling south. Touch for map. Marker is in this post office area: Columbus OH 43085, United States of America. Touch for directions. 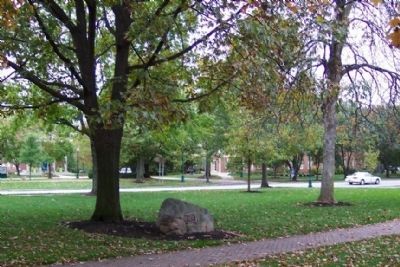