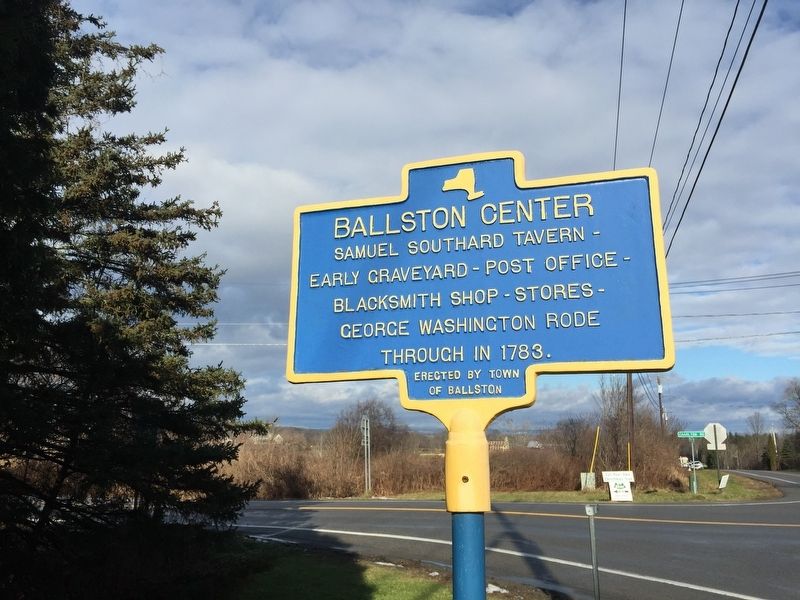 Erected by Town of Ballston.

Topics and series. This historical marker is listed in this topic list: Settlements & Settlers. In addition, it is included in the George Washington Slept Here, and the Postal Mail and Philately series lists.

Other nearby markers. At least 8 other markers are within walking distance of this marker. Ballston Church (within shouting distance of this marker); Christ Episcopal Church (about 500 feet away, measured in a direct line); Samuel Davis MD (approx. half a mile away); Ballston Site Of (approx. 0.6 miles away); Stephen White (approx. 0.6 miles away); Home of Samuel Young (approx. 0.6 miles away); Eliphalet Ball (approx. 0.7 miles away); 1780 Invasion (approx. one mile away). Touch for a list and map of all markers in Ballston Spa.
Credits. This page was last revised on December 5, 2018. It was originally submitted on December 3, 2018, by Steve Stoessel of Niskayuna, New York. This page has been viewed 126 times since then and 24 times this year. Photo   1. submitted on December 3, 2018, by Steve Stoessel of Niskayuna, New York. • Bill Pfingsten was the editor who published this page.
Share This Page.