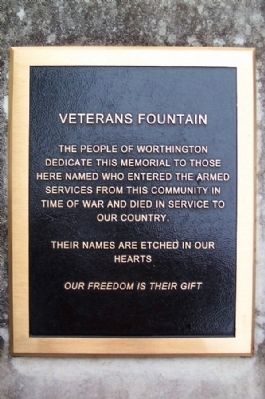 The people of Worthington dedicate this memorial to those here named who entered the Armed Services from this community in time of war and died in service to our country.

Their names are etched in our hearts.

Our freedom is their gift. 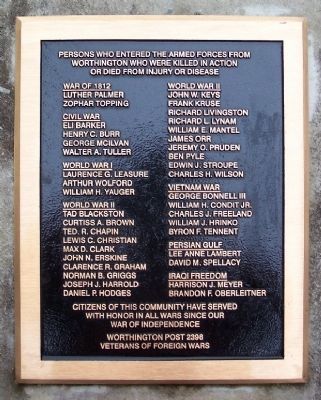 Let us bow our heads in silent prayer remembering those who made the ultimate sacrifice, that we might live in peace. To us is passed the sacred trust that their going was not in vain. Our heritage of liberty, justice and freedom will forever be cherished as their perpetual memorial.

Location. 40° 5.296′ N, 83° 1.105′ W. Marker is in Worthington, Ohio, in Franklin County. Memorial is on High Street, on the right when traveling south. Marker is on the village green SW quadrant. Touch for map. Marker is in this post office area: Columbus OH 43085, United States of America. Touch for directions. 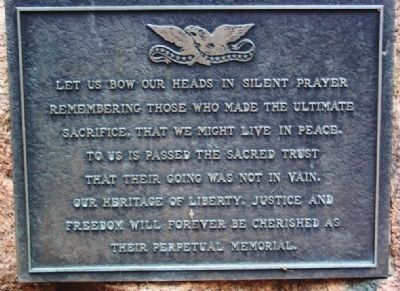 By William Fischer, Jr., October 17, 2008
3. Ultimate Sacrifice Marker
The rock and marker were placed in 1982 as part of Gary Thompson's Eagle Scout project, with funding assistance from The Veterans of Foreign Wars, the American Legion, and Worthington area businesses and individuals.
(about 300 feet away, measured in a direct line); The Bicentennial Oak (about 400 feet away); Eclectic Medical College (about 500 feet away); The Founding of Worthington / Worthington, A Planned Community (about 600 feet away); Worthington Masonic Museum (about 700 feet away); Orange Johnson House (approx. 0.4 miles away). Touch for a list and map of all markers in Worthington.

Additional commentary.
1. Original Ultimate Sacrifice Marker
It is so wonderful to see the evolution of this corner of the village green in Worthington, Ohio. I am a graduate of the Class of 1983 and am the Eagle Scout from Troop 268 that originally worked on the ultimate sacrifice marker along with VFW Post 1598 and American Legion Post 239. 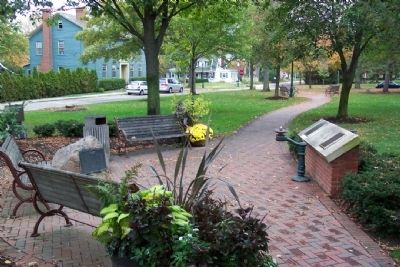 By William Fischer, Jr., October 17, 2008
4. Veterans Memorial Markers
along with then Congressman Wylie and State Senator John Kasich were present. Note To Editor only visible by Contributor and editor
— Submitted November 30, 2008, by Gary Thompson of Austin, Texas. 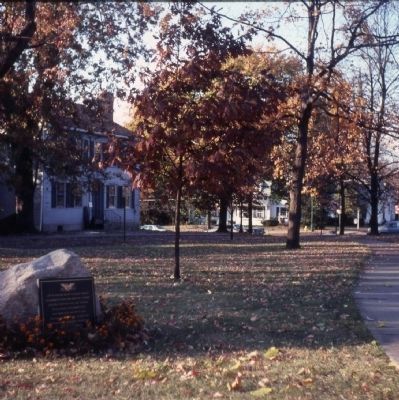