. This historical marker was erected by Daughters of the American Revolution Rufus King Chapter. It is in Jamaica in Queens County New York

At the head of this street known in colonial days as Meeting House Lane stood the Old Stone Church, used as a place of worship from 1699 to 1813, and as a prison in 1776 by the British.

Erected by Daughters of the American Revolution Rufus King Chapter.

Topics and series. This historical marker is listed in these topic lists: Churches & Religion • Colonial Era • War, US Revolutionary. In addition, it is included in the Daughters of the American Revolution series list. 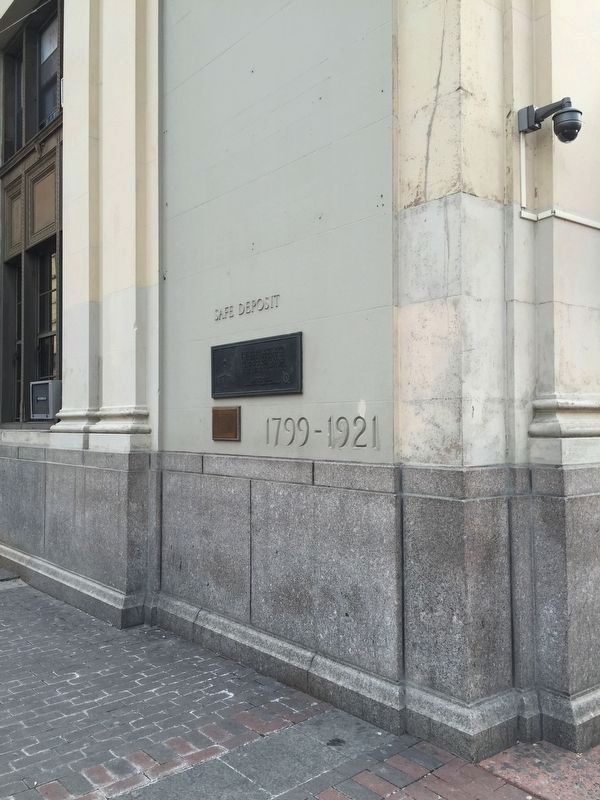 Also see . . .  Sidewalk clock on Jamaica Avenue (Wikipedia). "The village of Jamaica, settled by a band of English people, was granted a charter for “Rustdorp” by Governor Stuyvesant in 1656. Six years later, about 25 families of these settlers joined together to make this church. At a town meeting the same year it was voted to build a parsonage, 26 ft. long and 17 ft. wide, a large house for the time and place, the whole town being assessed for the cost. This parsonage served as the house for a few years until the town church was built in the last decade of the 17th century. The new meeting house was variously called : “The Town Church,” “The Stone Church” and “The Church.” It stood on the main street of the village not far from the present corner of Fulton Street and 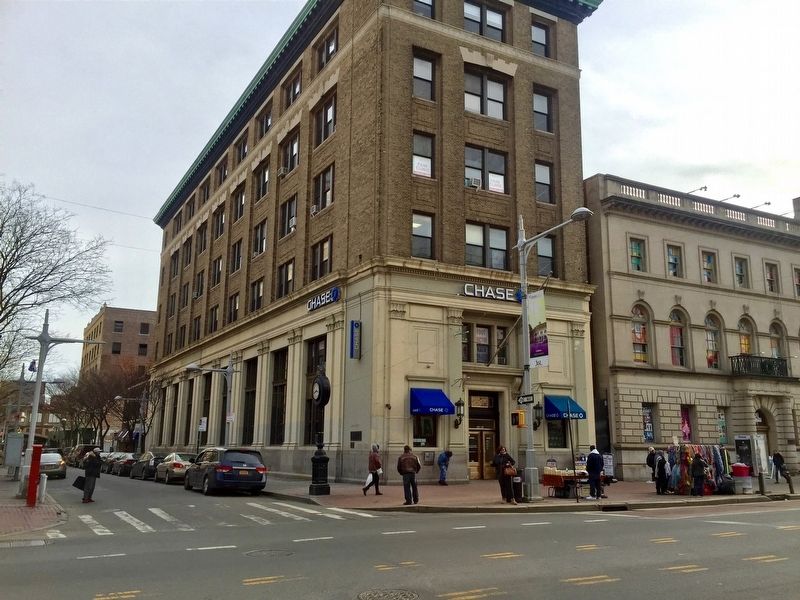 By Andrew Ruppenstein, February 21, 2017
3. The Old Stone Church Marker - wide view
Visible here on the corner of the building.
New York Avenue (Guy Brewer) at the head of Meeting House Lane (Union Hall St.)...It was used by all congregations for worship, as a town hall and as a court house for many years. For most of the 18th century the “Old Trail” along Jamaica avenue would make this area a trading post for farmers and their produce, with horse-drawn carts found up and down “Kings Highway”....When Lord Cornbury became governor, he placed the church and the parsonage at the disposal of the congregation of the Church of England on the grounds that the building had been paid for by public taxation. The Episcopalians then refused the other congregations the use of it. Whereupon, the Presbyterians brought suit and recovered both the parsonage and the church, which they continued to use until the new building was built in 1813. In the foundations of this building on 163rd st are some of the stones of the old church." (Submitted on December 14, 2018.)
Credits. This page was last revised on December 14, 2018. It was originally submitted on December 14, 2018, by Andrew Ruppenstein of Sacramento, California. This page has been viewed 83 times since then and 18 times this year. Photos:   1, 2, 3. submitted on December 14, 2018, by Andrew Ruppenstein of Sacramento, California.
Share This Page.