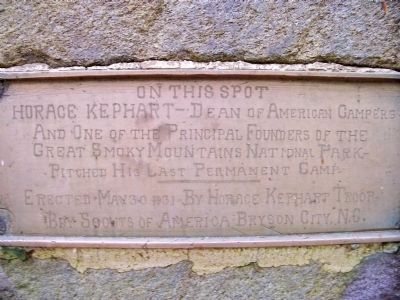 On this spot Horace Kephart - Dean of American Campers and one of the Principal Founders of the Great Smoky Mountains National Park - pitched his last permanent camp. 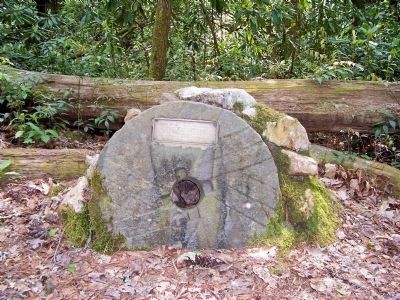 Also see . . .  Horace Kephart: Outdoorsman, Writer and Park Advocate. A chapter about Horace Kephart in the book, Mountain Passages: Natural and Cultural History of Western North Carolina and the Great Smoky Mountains by George Ellison and published by The History Press in 2005. (Submitted on October 20, 2008, by Kevin W. of Stafford, Virginia.)

Additional comments.
1. Horace Kephart's Refuge
"... Kephart found refuge from summer visitors seeking him out by camping at the old Bryson Place, now a designated camping area in the national park, situated about 10 miles north of Bryson City alongside Deep Creek. He would sometimes go there for an entire summer, hauling in by wagon or on horseback the supplies and equipment he required, which included a small folding desk and writing materials."

An excerpt from the book, Mountain Passages: Natural and Cultural History of Western North Carolina and the Great Smoky Mountains by George Ellison (see link provided).
— Submitted October 20, 2008, by Kevin W. of Stafford, Virginia.
2. Kephart Memorial
On January 5, 2009, I visited the Kephart Memorial near Bryson Place, together with John Kennerly and Richard Ryburn. John Kennerly hiked to Martins Gap, while Richard Ryburn and I looked for the marker. It was somewhat difficult to locate; both of searched for almost an hour, and Richard finally found it. Therefore I am submitting this additional information in the hope that it will help others locate the memorial more easily.

The memorial is located approximately 322' SW (bearing 220 degrees) from the Martins Gap Trail sign. From the trail sign, go back down the trail toward Deep Creek campground approximately 150', then go off the trail at an angle, to the right. The marker is below the trail, on the right. A GPS reading at the marker showed N 35 degrees 31.197' W 083 degrees 25.182', with an accuracy of plus or minus 14'. Note To Editor only visible by Contributor and editor
— Submitted January 10, 2009, by Frank March of Sevierville, Tennessee.
Credits. This page was last revised on November 29, 2019. It was originally submitted on October 20, 2008, by Kevin W. of Stafford, Virginia. This page has been viewed 3,534 times since then and 39 times this year. Photos:   1, 2. submitted on October 20, 2008, by Kevin W. of Stafford, Virginia.
Share This Page.