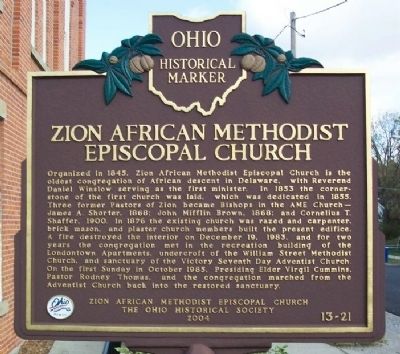 Organized in 1845, Zion African Methodist Episcopal Church is the oldest congregation of African descent in Delaware, with Reverend Daniel Winslow serving as the first minister. In 1853 the cornerstone of the first church was laid, which was dedicated in 1855. Three former Pastors of Zion became Bishops in the AME Church—James A. Shorter, 1868; John Mifflin Brown, 1868; and Cornelius T. Shaffer, 1900. In 1876 the existing church was razed and carpenter, brick mason, and plaster church members built the present edifice. A fire destroyed the interior on December 19, 1983, and for two years the congregation met in the recreation building of the Londontown Apartments, undercroft of the William Street Methodist Church, and sanctuary of the Victory Seventh Day Adventist Church. On the first Sunday in October 1985, Presiding Elder Virgil Cummins, Pastor Rodney Thomas, and the congregation marched from the Adventist Church back into the restored sanctuary. 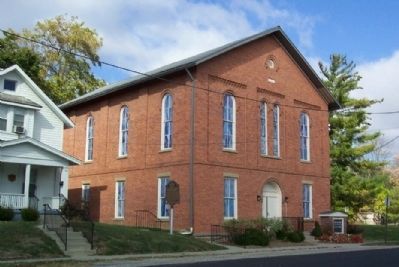 Click or scan to see
this page online
marker is listed in these topic lists: African Americans • Churches & Religion • Notable Buildings. In addition, it is included in the African Methodist Episcopal (AME) Church ⛪, and the Ohio Historical Society / The Ohio History Connection series lists. A significant historical month for this entry is October 1985.