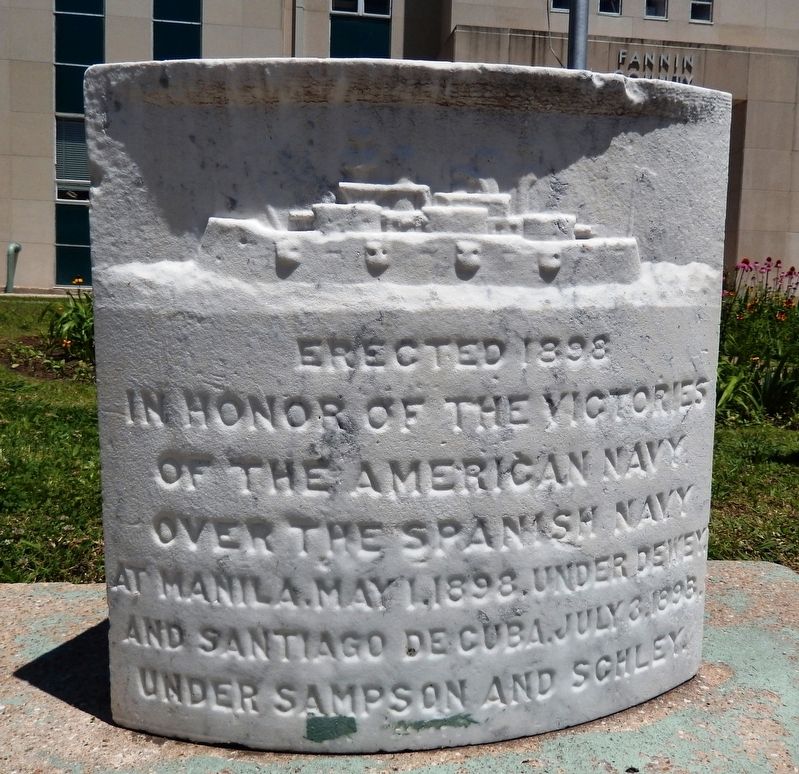 Photographed By Cosmos Mariner, May 13, 2016
1. Spanish-American War Memorial
Inscription.
Spanish-American War Memorial. .
Erected 1898 in honor of the victories of the American Navy over the Spanish Navy at Manila, May 1, 1898, under Dewey, and Santiago De Cuba, July 3, 1898, under Sampson and Schley.. . This memorial was erected in 1898. It is in Bonham in Fannin County Texas

Erected 1898
in honor of the victories
of the American Navy
over the Spanish Navy
at Manila, May 1, 1898, under Dewey,
and Santiago De Cuba, July 3, 1898,
under Sampson and Schley.

Location. 33° 34.637′ N, 96° 10.724′ W. Marker is in Bonham, Texas, in Fannin County. Memorial is on East Sam Rayburn Drive (State Highway 56) west of North Center Street, on the right when traveling west. Marker is located front of the main south courthouse entrance to the Fannin County Courthouse. Touch for map. Marker is at or near this postal address: 101 East Sam Rayburn Drive, Bonham TX 75418, United States of America. Touch for directions. 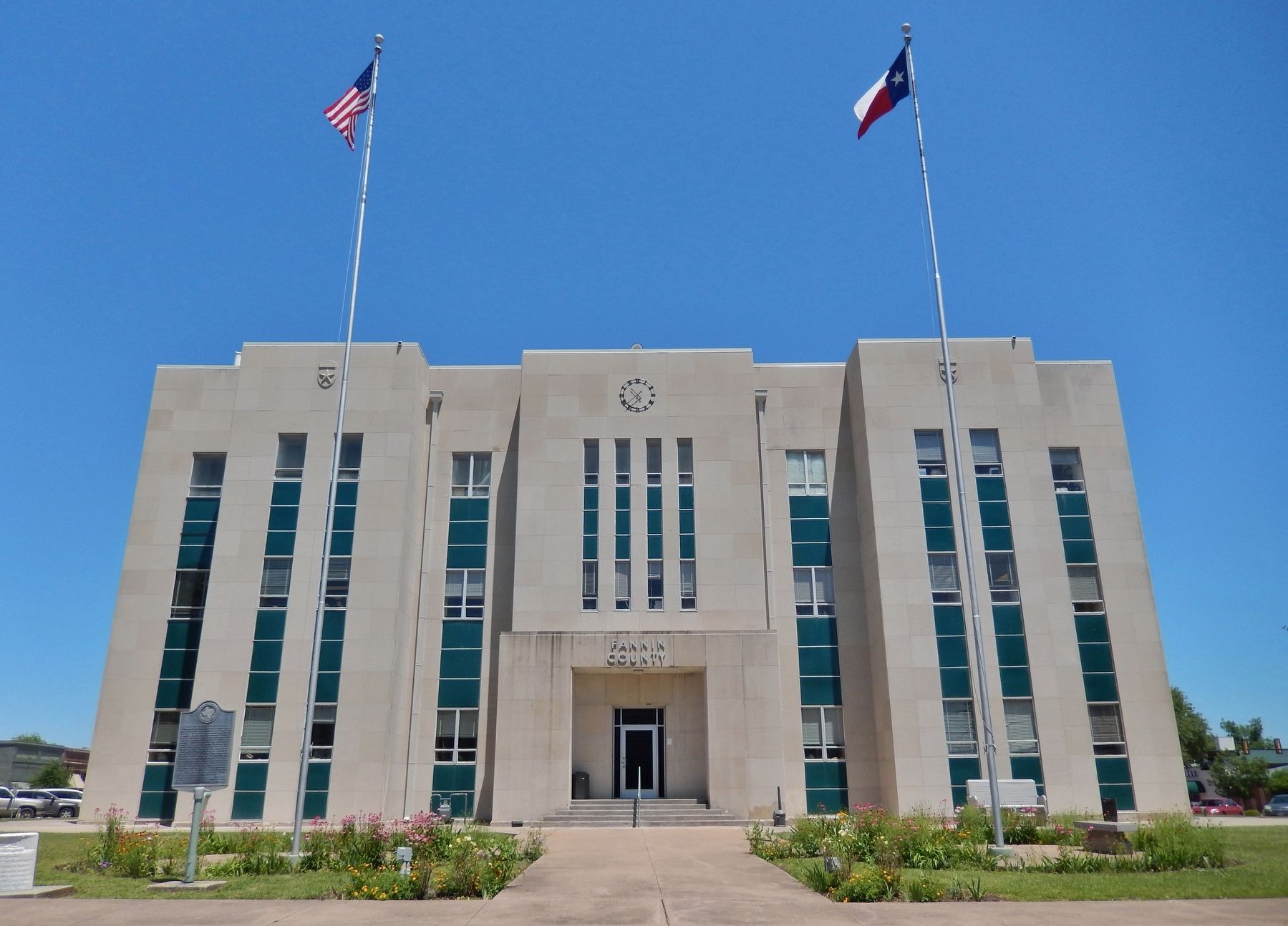 Click or scan to see
this page online
John Wesley Hardin (about 400 feet away); Bonham High School Auditorium and Gymnasium (approx. half a mile away); Bailey Inglish (approx. 0.6 miles away); Sam Rayburn House (approx. 1.7 miles away). Touch for a list and map of all markers in Bonham.

Also see . . .
1. Battle of Manila Bay. On May 1, 1898, at Manila Bay in the Philippines, the U.S. Asiatic Squadron destroyed the Spanish Pacific fleet in the first major battle of the Spanish-American War. At around 5:40 a.m., Dewey turned to the captain of his flagship, the Olympia, and said, “You may fire when ready, Gridley.” Two hours later, the Spanish fleet was decimated. In 1903, George Dewey became the only U.S. naval officer ever promoted to the rank of admiral of the Navy. (Submitted on January 15, 2019, by Cosmos Mariner of Cape Canaveral, Florida.)

2. Battle of Santiago de Cuba. On May 19, 1898, a month after the outbreak of hostilities between the two powers, a Spanish fleet under Admiral Pascual Cervera arrived in Santiago harbour on the southern coast of Cuba. The Spanish fleet was immediately blockaded in harbor by superior U.S. warships from the U.S. squadrons in the Atlantic, under Rear Admiral William T. Sampson and Commodore Winfield S. Schley. By July, however, the progress of U.S. land forces in Cuba put Cervera’s ships at risk from the shore. The Spanish admiral decided to attempt a breakout. On 3 July, four cruisers and two destroyers steamed out of Santiago de Cuba. Losses: Spanish, 474 dead or wounded, 1,800 captured, all 6 ships lost; U.S., 1 dead, 1 wounded, no ships lost of 8. Two weeks later Spain surrendered Santiago de Cuba. The U.S. victory ended the war, suppressed all Spanish naval resistance in the New World, and enhanced the reputation of the U.S. Navy. (Submitted on January 15, 2019, by Cosmos Mariner of Cape Canaveral, Florida.)
Credits. This page was last revised on January 17, 2019. It was originally submitted on January 14, 2019, by Cosmos Mariner of Cape Canaveral, Florida. This page has been viewed 125 times since then and 28 times this year. Photos:   1, 2. submitted on January 14, 2019, by Cosmos Mariner of Cape Canaveral, Florida. • Bernard Fisher was the editor who published this page.
Share this page.