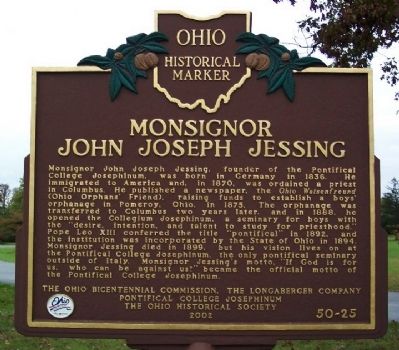 Monsignor John Joseph Jessing, founder of the Pontifical College Josephinum, was born in Germany in 1836. He immigrated to America and, in 1870, was ordained a priest in Columbus. He published a newspaper, the Ohio Waisenfreund (Ohio Orphans' Friend), raising funds to establish a boys' orphanage in Pomeroy, Ohio, in 1875. The orphanage was transferred to Columbus two years later, and in 1888, he opened the Collegium Josephinum, a seminary for boys with the "desire, intention, and talent to study for priesthood." Pope Leo XIII conferred the title "pontifical" in 1892, and the institution was incorporated by the State of Ohio in 1894. Monsignor Jessing died in 1899, but his vision lives on at the Pontifical College Josephinum, the only pontifical seminary outside of Italy. Monsignor Jessing's motto, "If God is for us, who can be against us?" became the official motto of the Pontifical College Josephinum. 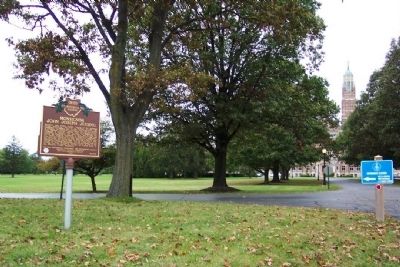 Click or scan to see
this page online
is listed in these topic lists: Charity & Public Work • Churches & Religion • Education. In addition, it is included in the Ohio Historical Society / The Ohio History Connection series list. A significant historical year for this entry is 1836.

Location. 40° 7.195′ N, 83° 0.983′ W. Marker is in Columbus, Ohio, in Franklin County. Marker is at the intersection of High Street (U.S. 23) and the Pontifical College Josephinum entrance road, on the right when traveling south on High Street. Touch for map. Marker is at or near this postal address: 7625 North High Street, Columbus OH 43235, United States of America. Touch for directions. 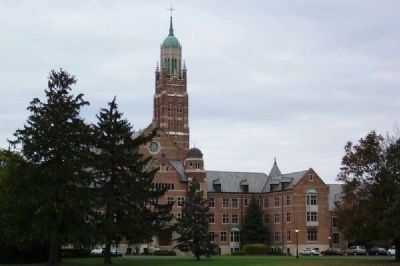