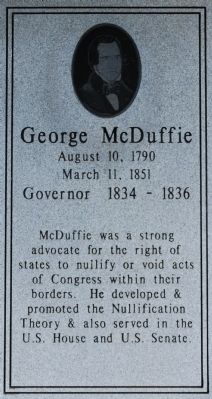 Photographed By Brian Scott, October 10, 2008
1. George McDuffie Marker
Inscription.
George McDuffie. August 10, 1790 - March 11, 1851. McDuffie was a strong advocate for the right of states to nullify or void acts of Congress within their borders. He developed and promoted the Nullification Theory and also served in the U.S. House and U.S. Senate. . This historical marker is in Edgefield in Edgefield County South Carolina

McDuffie was a strong advocate for the right of states to nullify or void acts of Congress within their borders. He developed and promoted the Nullification Theory & also served in the U.S. House and U.S. Senate. 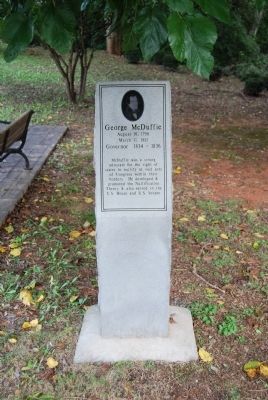 More about this marker. This marker is the second along the Ten Governor's Trail, a converted railroad bed that has been paved. There are markers to each of the 10 governors placed every 0.9 of a mile.

3. Nullification Convention. From 1824 to 1832, most if not all of the principles that were fought for during the American Civil War were implemented in South Carolina. (Submitted on October 23, 2008, by Brian Scott of Anderson, South Carolina.) 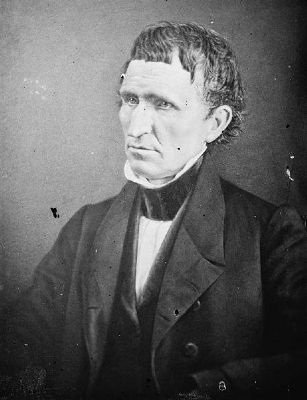 Library of Congress
3. Governor George McDuffie
(1790-1851)
S.C. General Assembly 1818-1821
U.S. House of Representatives from S.C. 1821-1834
Governor of S.C. 1834–1836
U.S. Senator from S.C. 1842–1846
McDuffie, (father-in-law of Wade Hampton [1818-1902]), a Representative and a Senator from South Carolina; born in Columbia County, Ga., August 10, 1790; attended an old-field school and a private academy; graduated from South Carolina College (now the University of South Carolina) at Columbia in 1813; studied law; admitted to the bar in 1814 and commenced practice in Pendleton, Anderson County, S.C.; member, State house of representatives 1818-1819; elected to the Seventeenth and to the six succeeding Congresses and served from March 4, 1821, until his resignation in 1834; chairman, Committee on Ways and Means (Nineteenth through Twenty-second Congresses); one of the managers appointed by the House of Representatives in 1830 to conduct the impeachment proceedings against James H. Peck; Governor of South Carolina 1834-1836; president of the board of trustees of South Carolina College; elected as a Democrat to the United States Senate to fill the vacancy caused by the resignation of William C. Preston; reelected, and served from December 23, 1842, until August 17, 1846, when he resigned; chairman, Committee on Foreign Relations (Twenty-ninth Congress); died at ‘Cherry Hill,’ Sumter District (now Sumter County), S.C., March 11, 1851; interment in Cherry Hill Cemetery, Sumter District, S.C. (Source: Biographical Directory of the U.S. Congress.)
— Submitted January 3, 2010, by Brian Scott of Anderson, South Carolina.
Credits. This page was last revised on November 15, 2020. It was originally submitted on October 23, 2008, by Brian Scott of Anderson, South Carolina. This page has been viewed 970 times since then and 35 times this year. Photos:   1, 2, 3. submitted on October 23, 2008, by Brian Scott of Anderson, South Carolina.
Share this page.