The History of Wallula 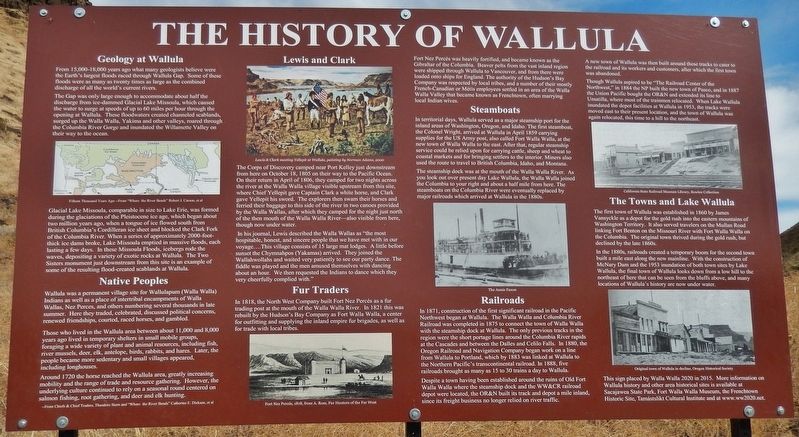 Geology at Wallula
From 15,000-18,000 years ago what many geologists believe were the Earth’s largest floods raced through Wallula Gap. Some of these floods were as many as twenty times as large as the combined discharge of all the world’s current rivers

The Gap was only large enough to accommodate about half the discharge from ice-dammed Glacial Lake Missoula, which caused the water to surge at speeds of up to 60 miles per hour through the opening at Wallula. These floodwaters created channeled scablands, surged up the Walla Walla, Yakima and other valleys, roared through the Columbia River Gorge and inundated the Willamette Valley on their way to the ocean.

Glacial Lake Missoula, comparable in size to Lake Erie, was formed during the glaciations of the Pleistocene ice age, which began about two million years ago, when a tongue of ice flowed south from British Columbia’s Cordilleran ice sheet and blocked the Clark Fork of the Columbia River. When a series of approximately 2000-foot-thick ice dams broke, Lake Missoula emptied in massive floods, each lasting a few days. In these Missoula Floods, icebergs rode the 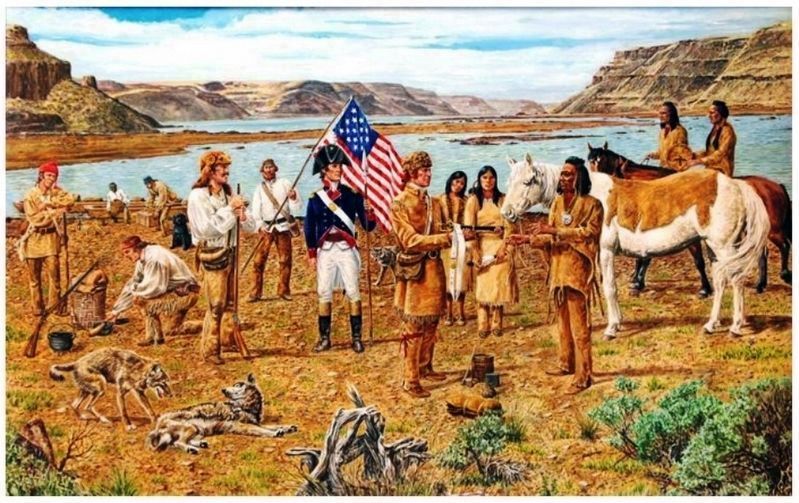 By Norman Adams, 2000
2. Marker detail: "Lewis & Clark meeting at Yellepit at Wallula," painting by Norman Adams, 2000
waves, depositing at Wallula a variety of exotic rocks. The Two Sisters monument there is an example of some of the flood-created scablands at Wallula.
~From “Where the River Bends,” Robert J. Carson, et. al.

Those who lived in the Wallula area between about 11,000 and 8,000 years ago lived in temporary shelters in small mobile groups, foraging a wide variety of plant and animal resources, including fish, river mussels, deer, elk, antelope, birds, rabbits, and hares. Later, the people became more sedentary and small villages appeared, including longhouses.

Around 1720 the horse reached the Wallula area, greatly increasing mobility and the range of trade and resource gathering. However, the underlying culture continued to rely on a seasonal round centered on salmon fishing, root gathering, and deer and elk hunting.
~From “Chiefs and Chief Traders,” Theodore Stern, and “Where the River Bends,” Catherine E. Dickson, et. al. 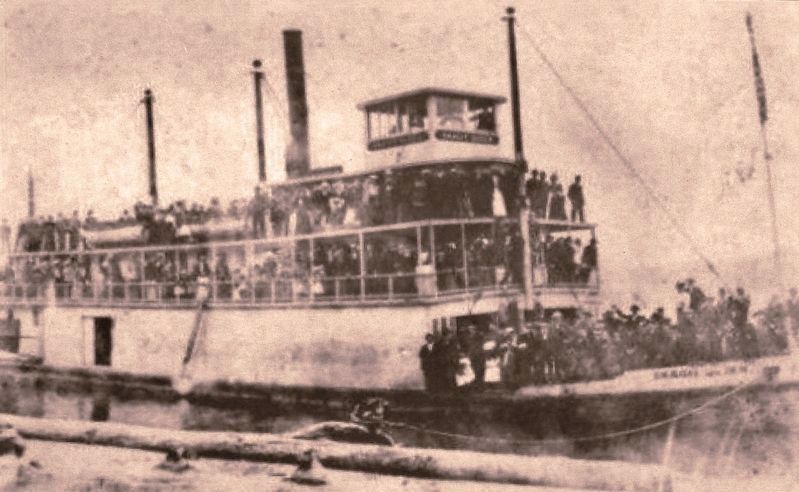 3. Marker detail: The Annie Faxon
Clark
The Corps of Discovery camped just south of Wallula on October 15, 1805 on their way to the Pacific Ocean. On their return in April of 1806, they camped for two nights at the Walla Walla village on the north side of the river, where Chief Yellepit gave Captain Clark a white horse, and Clark gave Yellepit his sword. The explorers then swam their horses and ferried their baggage across the river in two canoes provided by the Walla Wallas, after which the party camped for the night just north of the mouth of the Walla Walla River – also visible from here.

In his journal, Lewis described the Walla Wallas as “the most hospitable, honest, and sincere people that we have met with in our voyage… This village consists of 15 large mat lodges. A little before sunset the Chymnahpos (Yakamas) arrived. They joined the Wallahwollahs and waited very patiently to see our party dance. The fiddle was played and the men amused themselves with dancing about an hour. We then requested the Indians to dance which they very cheerfully complied with.”

Fur Traders
In 1818, the North West Company built Fort Nez Percés as a fur trading post at the mouth of the Walla Walla River. In 1821 this was rebuilt by the Hudson’s Bay Company as its Fort Walla Walla, a center for outfitting and supplying the inland empire fur brigades, as well as for trade with

Fort Nez Percés was heavily fortified, and became known as the Gibraltar of the Columbia. Beaver pelts from the vast inland region were shipped through Wallula to Vancouver, and from there were loaded onto ships for England. The authority of the Hudson’s Bay Company was respected by local tribes, and many of their mostly French-Canadian or Métis employees settled in an area of the Walla Walla Valley that became known as Frenchtown, often marrying local Indian wives.

Steamboats
In territorial days, Wallula served as a major steamship port for the inland areas of Washington, Oregon, and Idaho. The first steamboat, the Colonel Wright, arrived at Wallula in April 1859 carrying military supplies for the US Army post, also called Fort Walla Walla, at the new town of Walla Walla to the east. After that, regular steamship service could be relied upon for carrying cattle, sheep and wheat to coastal markets and for bringing settlers to the interior. Miners also used the route to travel to British Columbia, Idaho, and Montana.

The steamship dock was at the mouth of the Walla Walla River. As you look out over present day Lake Wallula, the Walla Walla joined the Columbia to your right and about a half mile from here. The steamboats on the Columbia River were eventually replaced by major railroads which arrived at Wallula in the 1880s. 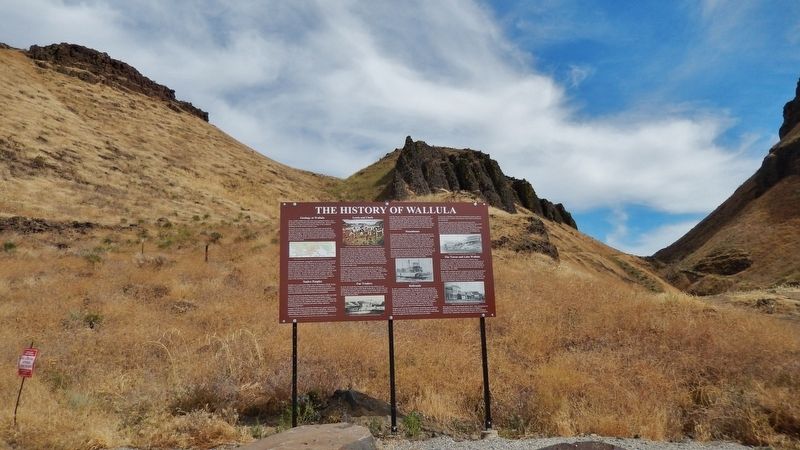 By Cosmos Mariner, July 1, 2016
5. The History of Wallula Marker (wide view)
1871, construction of the first Pacific Northwest railroad of any length began at Wallula. The Walla Walla and Columbia River Railroad was completed in 1875 to connect the town of Walla Walla with the steamship dock at Wallula. The only previous tracks in the region were the short portage lines around the Columbia River rapids at the Cascades and between the Dalles and Celilo Falls. In 1880, the Oregon Railroad and Navigation Company began a line from Wallula to Portland, which by 1883 was linked at Wallula to the Northern Pacific’s transcontinental railroad. In 1888, five railroads brought as many as 15 to 30 trains a day to Wallula.

Despite a town having been established around the ruins of Old Fort Walla Walla where the steamship dock and the WW&CR railroad depots were located, the OR&N built its track and depot a mile inland because its freight business no longer relied on river traffic. A new town of Wallula was then built around these tracks to capitalize on the railroad and its workers and customers, after which the first town was abandoned.

Though Wallula aspired to be “The Railroad Center of the Northwest,” in 1884 the NP built the new town of Pasco, and in 1887 the Union Pacific bought the OR&N and extended its line to Umatilla, where most of the trainmen relocated. When Lake Wallula inundated the depot facilities at Wallula in 1953, the tracks were moved east to their present location, and the town of Wallula was again relocated, this time to a hill to the northeast.

The Towns and Lake Wallula
The first town of Wallula was established in 1860 by James Vansyckle as a depot for the gold rush into the eastern mountains of Washington Territory. It also served travelers on the Mullan Road linking Fort Benton on the Missouri River with Fort Walla Walla on the Columbia. The original town thrived during the gold rush, but declined by the late 1860s.

In the 1880s the railroads created a temporary boom for the second town built a mile east along the new mainline. With the construction of McNary Dam and the 1953 inundation of both town sites by Lake Wallula, the final town of Wallula looks down from a low hill to the northeast of here that can be seen from the bluffs above, and many locations of Wallula’s history are now under water.

Topics and series. This historical marker is listed in these topic lists: Exploration • Native Americans • Railroads & Streetcars • Settlements & Settlers. In addition, it is included in the Lewis & Clark Expedition series list.