Thurgood Marshall and the Hillburn Schools 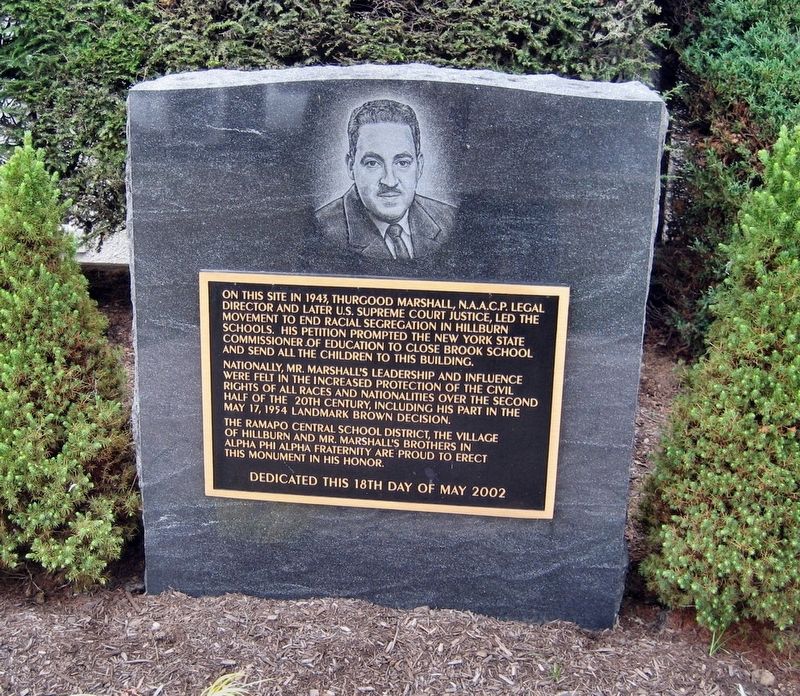 Nationally, Mr. Marshall's leadership and influence were felt in the increased protection of the civil rights of all races and nationalities over the second half of the 20th century, including his part in the May 17, 1954 landmark Brown decision.

Th Ramapo Central School District, the Village of Hillburn and Mr. Marshall's Brothers in Alpha Phi Alpha Fraternity are proud to erect this momument in his honor.

Dedicated this 18th day of May 2002 . . This historical marker was erected in 2002. It is in Hillburn in Rockland County New York

On this site in 1943, Thurgood Marshall, NAACP Legal Director and later US Supreme Court Justice, led the movement to end racial segregation in Hillburn schools. His petition prompted the New York State Commissioner of Education to close Brook School and send all the children to this building.

Nationally, Mr. Marshall's leadership and influence were felt in the increased protection of the civil rights of all races and nationalities over the second half of the 20th century, including his part in the May 17, 1954 landmark Brown decision.

Th Ramapo Central School District, the Village of Hillburn and Mr. Marshall's Brothers in Alpha Phi Alpha Fraternity are proud to erect this momument in his honor. 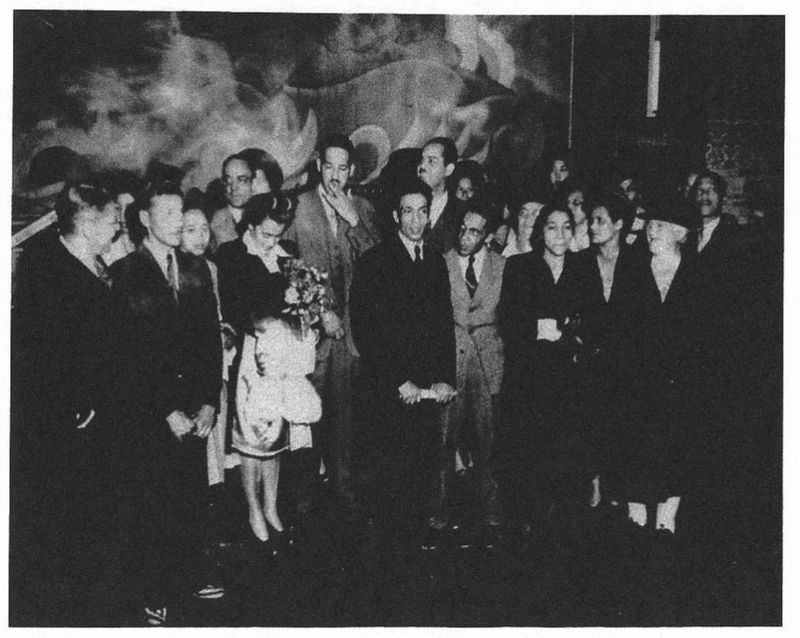 By Rapid News Service, 1943
2. Thurgood Marshall and Hillburn parents
Photograph shows lawyer Thurgood Marshall with parents of African American students from Hillburn, New York. In 1943, the attorney Thurgood Marshall won a case which led to the desegregation of Hillburn schools. -- Library of Congress
Avenue. This Marker sits in front of the Main School, Hillburn, NY. The school is listed on the National Register of Historic Places. Hillburn's Main School is significant at the state level under Criterion A in the areas of Law and Social History as the focus of a prominent school desegregation battle in 1943. Developed by the managers of a local ironworks, the hamlet of Hillburn grew during the late nineteenth century. The community's white residents lived on Hillburn's ordered streets, while the black community lived in the hollow to the west; by 1888, the local school district included a white and a black school. In 1912, Main School was built to replace the white community's aging frame school. The light-filled, airy concrete and hollow tile school with eight classrooms presented a marked contrast to the small, frame Brook School for black students. Over the next several decades, discontent over the unequal, segregated educational facilities grew within Hillburn's black community. Both local action and an NAACP appeal failed in 1931, as segregated schools were legal under New York law. When the discriminatory law was overturned in 1938, Hillburn's school board failed to act. In 1943, the Suffern Central High School, a new centralized school which would house the 7th through 12th grades for the district, was completed. The change left enough room for all of Hillburn's elementary 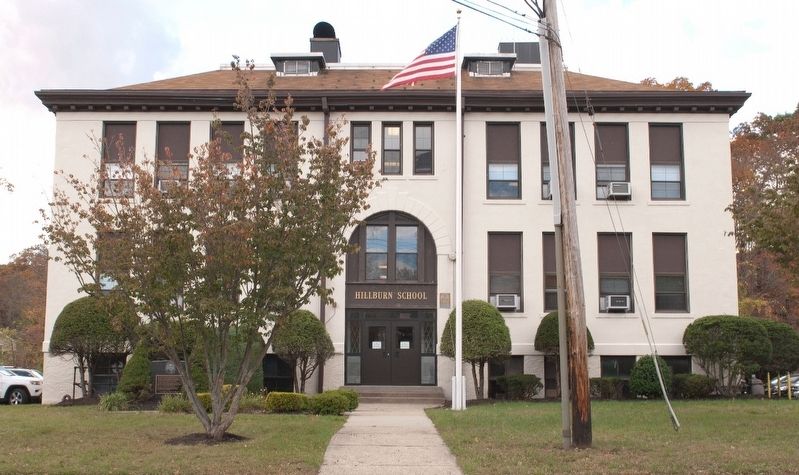 African American Historical Society of Rockland County, October 24, 2016
3. Hillburn Main School (Marker on left)
students to attend Main School, but the school board made no move to integrate the Main and Brook Schools. Empowered by improved economic conditions, models of strong female leadership in the community, and examples of successful school boycotts across the northeast, Hillburn's black community decided to take a stand against the school board. A coalition of black parents reached out to the NAACP for legal assistance and coordinated a strike against Brook School. Thurgood Marshall, the young head of the NAACP's legal department, assisted the community with its petition against the school board and appeal to the New York State Board of Education. Just over a month after the strike began, Commissioner George D. Stoddard ruled that Brook School should be closed and that all students, regardless of race, should attend Main School. The decision brought a swift end to one of the last, if not the last, formally segregated schools in New York State. Shocked, Hillburn's white parents swiftly enrolled their students in regional private schools; after a few years, integration gradually became a reality at Main School. The events in Hillburn were widely covered by regional, state, and national media and the result was a small, but important victory for the NAACP. The battle inspired a bill, a poem, and encouraged white and black activists in the New York region to fight de facto neighborhood 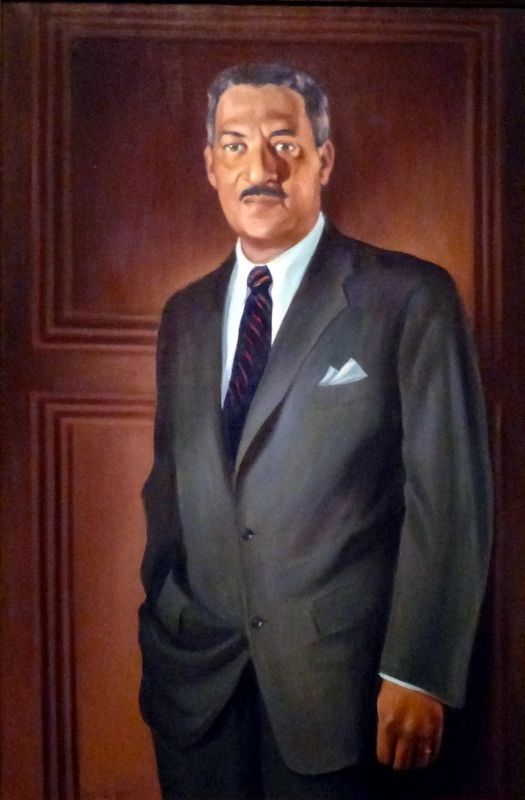 “Thurgood Marshall played a major role in the 1940s and 1950s as a leader in the struggle to end racial discrimination in the United States. From 1938 to 1961, he served as chief staff lawyer for the NAACP. Marshall devoted much effort to tailoring arguments that led the Supreme Court to its unanimous 1954 Brown v. the Board of Education of the City of Topeka decision, which ruled segregation of public schools by race to be unconstitutional. But he realized the struggle was not over. At a party celebrating the Brown decision, Marshall warned his colleagues, ‘I don't want any of you to fool yourselves, it's just begun; the fight has just begun.’ He went on to become the first African American Supreme Court justice, nominated by President lyndon Johnson in 1967.” — National Portrait Gallery
educational segregation in other communities. Property Name Main School Reference Number 15000516 State New York County Rockland Town Hillburn Street Address 45 Mountain Avenue Multiple Property Submission Name N/A Status Listed 8/5/2015 Areas of Significance Law, Social History Link to full file http://www.nps.gov/nr/feature/places/pdfs/15000516.pdf. Touch for map. Marker is at or near this postal address: 45 Mountain Avenue, Hillburn NY 10931, United States of America. Touch for directions.

Regarding Thurgood Marshall and the Hillburn Schools. Read more about this here: https://www.hrvh.org/cdm/compoundobject/collection/hsrc/id/4450/show/4426/rec/2