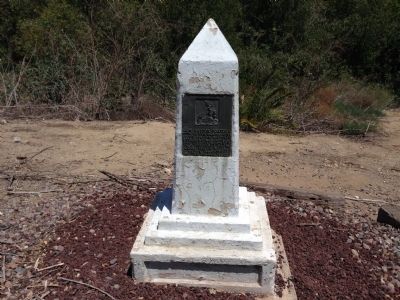 Erected 1932 by Native Daughters of the Golden West.

Topics and series. This historical marker is listed in these topic lists: Exploration • Hispanic Americans • Settlements & Settlers. In addition, it is included in the Gaspar de Portolá Expedition, and the Native Sons/Daughters of the Golden West series lists.

Location. 33° 56.32′ N, 117° 53.457′ W. Marker is in Brea, California, in Orange County. Marker is on Brea Boulevard half a mile north of Central Boulevard, on the right when traveling north. Touch for map. Marker is in this post office area: Brea CA 92821, United States of America. Touch for directions.