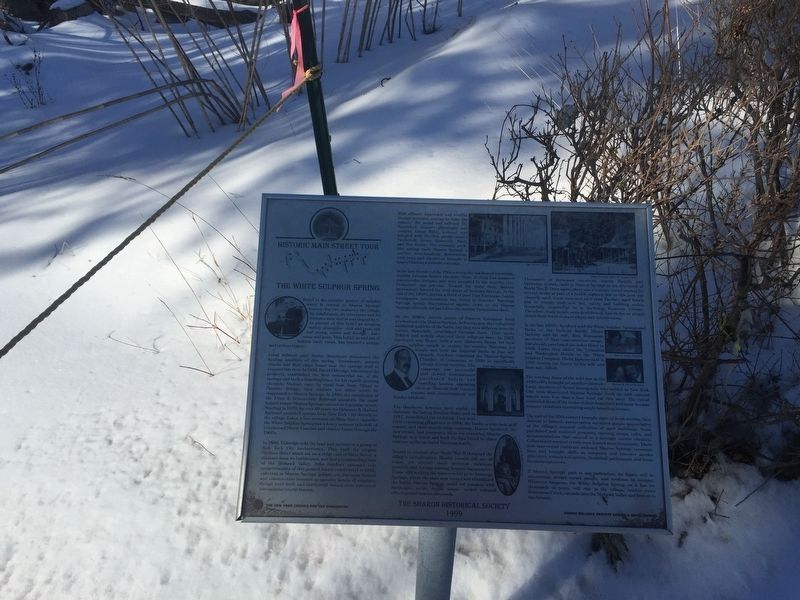 Belief in the curative powers of sulphur water is central in Sharon Springs’ history. For two centuries the village, its inhabitants, its structures, and its fortunes were tied to and shaped by it. In pursuit of this belief an amazing variety of people- rich and poor, old and young, native and foreign - have come and gone. This belief, in and out of fashion many times, has created a unique and curious legacy.

Local folklore says Native Americans discovered the healing qualities of this spring. Arrowheads, pottery shards and flint chips found near the spring tend to support this view. In 1825, David Eldridge, who owned the property, established the first commercial use of the springs, and built a boardinghouse for his rapidly growing clientele. Visitors came by canal boat from Albany to Palatine Bridge, then another ten miles south by stagecoach to Sharon Springs. In 1830, the completion of the Utica & Schenectady Railroad alongside the canal helped assure Sharon Springs success as a popular resort. Starting in 1870, for over 60 years, the Delaware & Hudson Railroad provided service from New York City directly to the village. Later, a bus 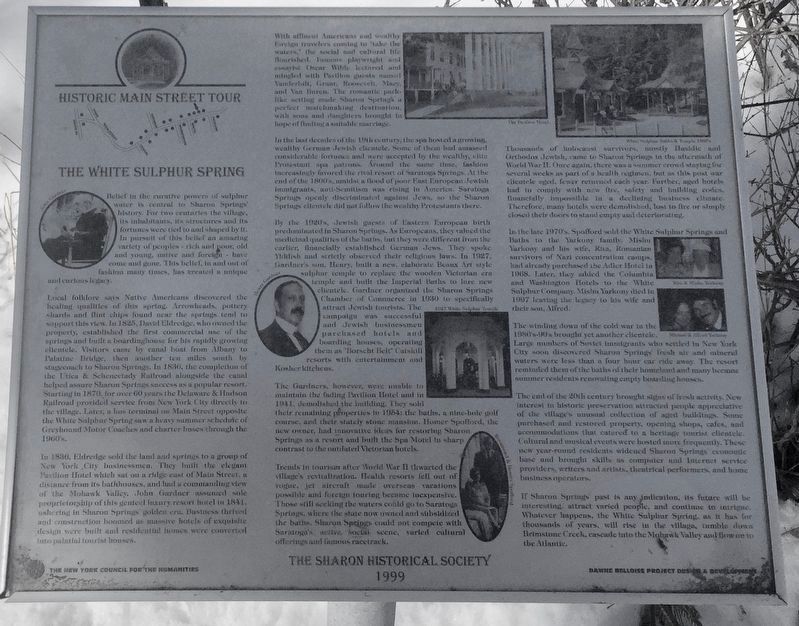 Click or scan to see
this page online
terminal on Main Street opposite the White Sulphur Spring saw a heavy summer schedule of Greyhound Motor Coaches and charter buses through the 1960’s.

In 1830, Eldridge sold the land and springs to a group of New York City businessmen. They built the elegant Pavilion Hotel which sat on a ridge east of Main Street, a distance from its bathhouses, and had a commanding view of the Mohawk Valley. John Gardner assumed the sole proprietorship of this genteel luxury resort in 1841, ushering in Sharon Springs’ golden era. Business thrived and construction boomed as massive hotels of exquisite design were built and residential homes were converted into palatial tourist houses.

In the last decade of the 19th century, the spa hosted a growing wealthy German Jewish clientele. Some of them had amassed considerable fortunes and were accepted by the wealthy, elite Protestant spa patrons. Around the same time, fashion increasingly favored the rival 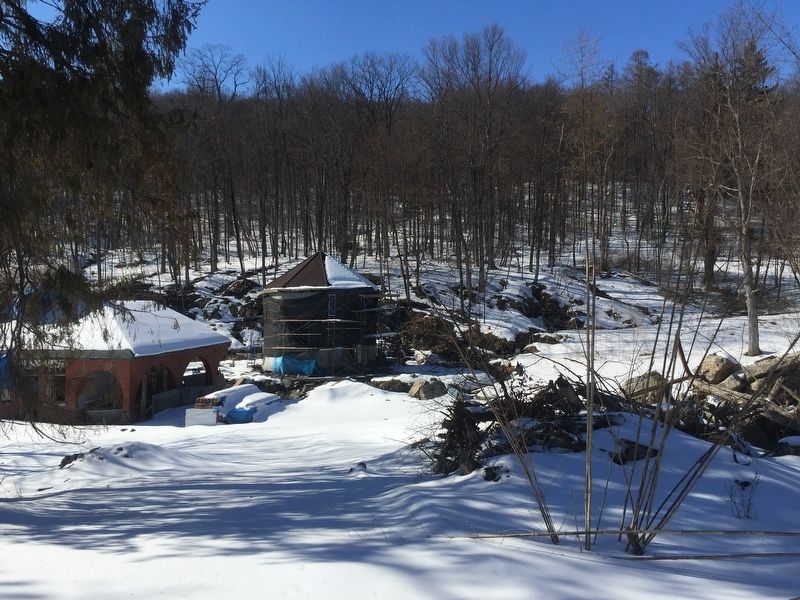 Photographed By Steve Stoessel, March 9, 2019
3. The White Sulphur Spring Marker
resort of Saratoga Springs. At the end of the 1800’s, amidst a flood of poor East European Jewish immigrants, anti-Semitism was rising in America. Saratoga Springs openly discriminated against Jews, so the Sharon Springs clientele did not follow the wealthy Protestants there.

By the 1920’s Jewish guests of Eastern European birth predominated in Sharon Springs. As Europeans, they valued the medicinal qualities of the baths, but they were different from the earlier, financially established German Jews. They spoke Yiddish and strictly observed their religious laws. In 1927, Gardner’s son Henry, built a new, elaborate Beaux Art style sulphur temple to replace the wooden Victorian era temple and built the Imperial Baths to lure new Clientele. Gardner organized the Sharon Springs Chamber of Commerce in 1930 to specifically attract Jewish tourists. The campaign was successful and Jewish businessmen purchased hotels and boarding houses, operating them as “Borscht “Belt” Catskill resorts with entertainment and Kosher kitchens.

The Gardners, however, were unable to maintain the fading Pavilion Hotel, and in 1941, demolished the building. They sold their remaining properties in 1954: the baths, a nine-hole golf course, and their stately stone mansion. Homer Spofford, the new owner, had innovative ideas for restoring Sharon Springs as a resort and built the Spa Motel in sharp contrast to the outdated Victorian hotels.

Trends in tourism after World War II thwarted the village’s revitalization. Health resorts fell out of vogue, jet aircraft made oversea vacations possible and foreign touring inexpensive. Those still seeking the waters could go to Saratoga Springs where the state now owned and subsidized the baths. Sharon Springs could not compete with Saratoga’s active social scene, varied cultural offerings, and famous racetrack.

Thousands of holocaust survivors, mostly Hasidic and Orthodox Jewish, came to Sharon Springs in the aftermath of World War II. Once again there was a summer crowd staying for several weeks as part of a health regimen, but as this post war clientele aged, fewer returned each year. Further, aged hotels had to comply with new fire, safety, and building codes, financially impossible in a declining business climate. Therefore, many hotels were demolished, lost to fire or simply closed their doors to stand empty and deteriorating.

In the late 1970’s, Spofford sold the White Sulphur Springs and Baths to the Yarkony family Mishu Yarkony and his wife Rita, Romanian survivors of Nazi concentration camps had already purchased the Adler Hotel in 1968. Later, they added the Columbia and Washington Hotels to the White Sulphur Company. Mishu Yarkony died in 1997, leaving this legacy to his wife and their son Alfred.

The winding down of the cold war in the 1980’s-90’s brought yet another clientele. Large numbers of Soviet immigrants who settled in New York City soon discovered Sharon Springs’ fresh air and mineral waters were less than a four hour car ride away. The resort reminded them of the baths of their homeland and many became summer residents renovating empty boarding houses.

If Sharon Springs' past is any indication, its future will be interesting, attract varied people, and continue to intrigue. Whatever happens, the White Sulphur Spring, as it has for thousands of years will rise in the village, tumble down Brimstone Creek, cascade into the Mohawk Valley and flow into the Atlantic.