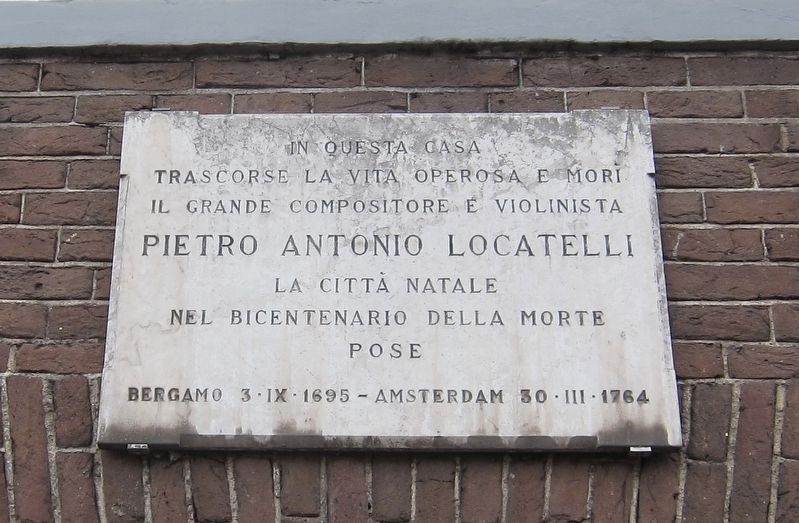 In this house worked and died the great composer and violinist, Pietro Antonio Locatelli. Placed by his hometown on the bicententary of his death. Bergamo (Italy), September 3, 1695 - Amsterdam, March 30, 1764 . This historical marker was erected in 1964. It is in Amsterdam North Holland Netherlands

In this house worked and died the great composer and violinist, Pietro Antonio Locatelli. Placed by his hometown on the bicententary of his death.
Bergamo (Italy), September 3, 1695 - Amsterdam, March 30, 1764

Other nearby markers. At least 8 other markers are within walking distance of this marker. Taeke Ferwerda and Siebren van der Baan Memorial (about 180 meters away, measured in a direct line); John Adams (approx. 0.2 kilometers away); Dr. Evert Van Dieren 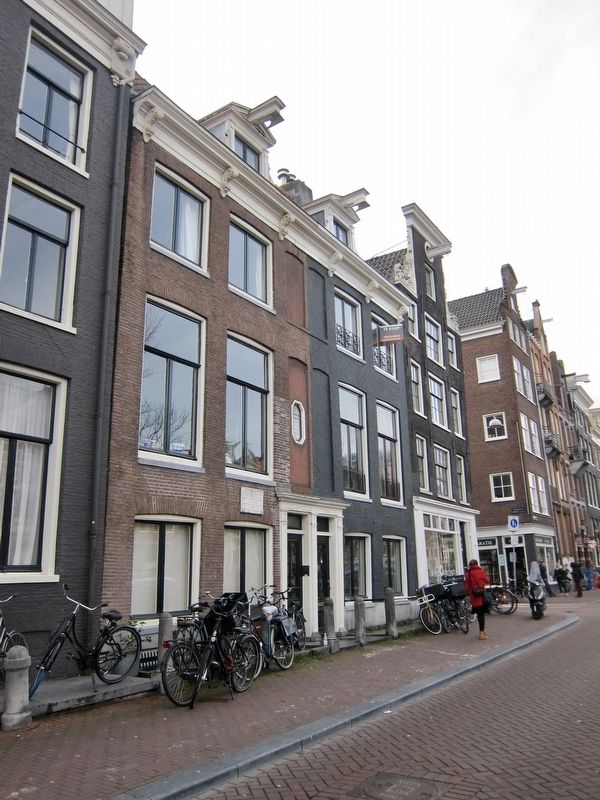 Also see . . .  Pietro Locatelli (Wikipedia). "Pietro Antonio Locatelli (3 September 1695 in Bergamo – 30 March 1764 in Amsterdam) was an Italian Baroque composer and violinist....In 1729 Locatelli moved to Amsterdam, where he stayed until his death. He did not compose so much as previously, but gave violin lessons to amateurs and edited his opp. 1–9 and the works of other musicians, such as Giovanni Battista Martini's Op. 2. His sparsely documented public and semi-public performances were open only to music lovers, not to professional musicians. An Englishman who heard him in 1741 wrote "he is so afraid of People Learning from him, that He won't admit a Professed Musician into his Concert". Some rich music lovers, who would play as amateurs with Locatelli, helped him to become affluent. In aristocratic circles he was a recognized, admired and supported virtuoso and composer. In 1741 he set up a business selling violin strings from his home. Including taxes he earned about 1500 guilders in 1742 alone, the highest income of any musician from Amsterdam. It is unknown why from 1744, when he released Op. 8, to 1762, when he released Op. 9, there were no reports of him from lexicographers, listeners or national and international music journalists." (Submitted on March 21, 2019.)