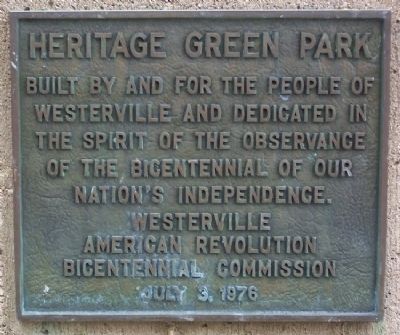 Photographed By William Fischer, Jr., October 17, 2008
1. Heritage Green Park Marker
Inscription.
Heritage Green Park. .
Built by and for the people of Westerville and dedicated in the spirit of the observance of the bicentennial of our nation's independence., July 3, 1976. . This historical marker was erected in 1976 by Westerville American Revolution Bicentennial Commission. It is in Westerville in Franklin County Ohio

Built by and for the people of
Westerville and dedicated in
the spirit of the observance
of the bicentennial of our
nation's independence.

Topics and series. This historical marker is listed in this topic list: Parks & Recreational Areas. In addition, it is included in the The Spirit of ’76, America’s Bicentennial Celebration series list. A significant historical month for this entry is July 1828.

Location. 40° 7.527′ N, 82° 55.898′ W. Marker is in Westerville, Ohio, in Franklin County. Marker is on State Street (Ohio Route 3) 0 miles north of Winter Street, on the right when traveling south. Heritage Green Park is part of the Westerville City Hall Complex. Touch for map. Marker is in this post office area: Westerville OH 43081, United States of America. Touch for directions. 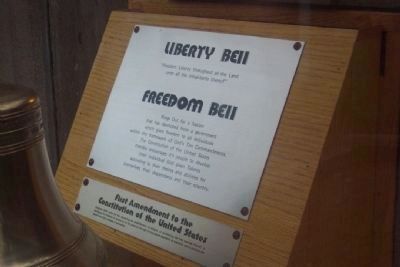 Photographed By William Fischer, Jr., October 17, 2008
2. Liberty Bell / Freedom Bell Display on Memorial Wall
Liberty Bell "Proclaim Liberty throughout all the Land unto all the Inhabitants thereof" Freedom Bell Rings Out for a Nation that has developed from a government which gives freedom to all individuals within the framework of God's Ten Commandments. The Constitution of the United States thereby encourages it's people to develop their individual God given Talents according to their desires and abilities for themselves, their descendants and their country. 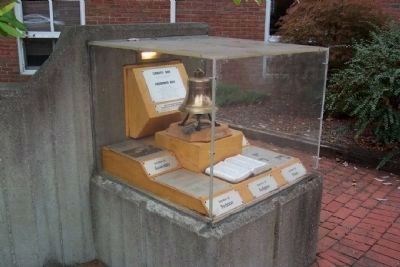 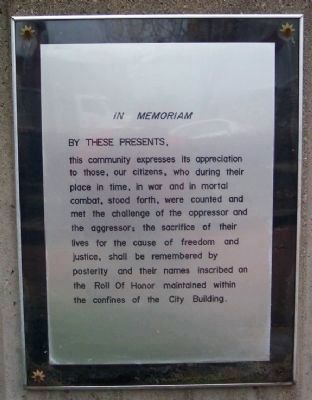 Photographed By William Fischer, Jr., October 17, 2008
4. Roll of Honor Remembrance Marker on Memorial Wall
In Memoriam By these presents, this community expresses its appreciation to those, our citizens, who during their place in time, in war and in mortal combat, stood forth, were counted and met the challenge of the oppressor and the aggressor; the sacrifice of their lives for the cause of freedom and justice, shall be remembered by posterity and their names inscribed on the Roll of Honor maintained within the confines of the City Building. 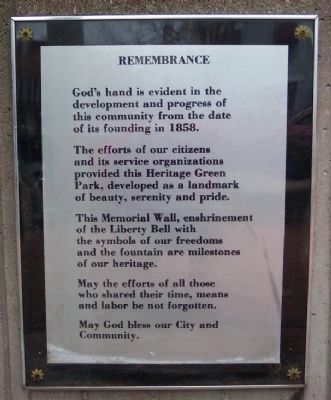 Photographed By William Fischer, Jr., October 17, 2008
5. Remembrance
God's hand is evident in the development and progress of this community from the date of its founding in 1858.
The efforts of our citizens and its service organizations provided this Heritage Green Park, developed as a landmark of beauty, serenity and pride.
This Memorial Wall, enshrinement of the Liberty Bell with the symbols of our freedoms and the fountain are milestones of our heritage.
May the efforts of all those who share their time, means and labor be not forgotten.
May God bless our City and Community. 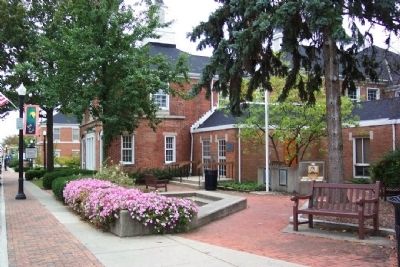