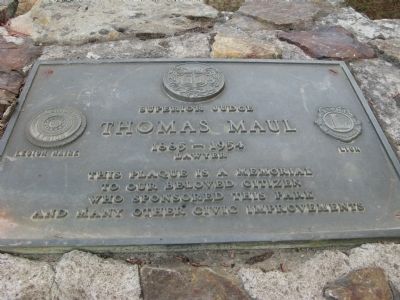 Photographed By Syd Whittle, October 18, 2008
1. Thomas Maul Marker
Inscription.
Thomas Maul. Superior Judge.
Lawyer.
This plaque is a memorial.
To our beloved citizen.
Who sponsored this park.
and many other civic improvements. . This historical marker is in Placerville in El Dorado County California 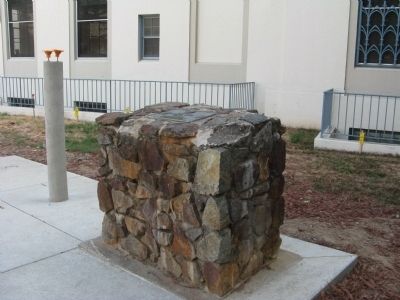 Click or scan to see
this page online
marker); Confidence Hall (within shouting distance of this marker); Douglass – Hines Building Bricks (within shouting distance of this marker); In Respectful Memory of Joseph M. Staples (about 300 feet away, measured in a direct line). Touch for a list and map of all markers in Placerville.

Additional commentary.
1. The Placerville Bell
This area of Placerville is currently undergoing extensive road construction. The bell that normally is on display at this little park is being held at the El Dorado County Museum for safe keeping. At the completion of construction the bell will be returned to this spot.
— Submitted October 31, 2008, by Syd Whittle of Mesa, Arizona. 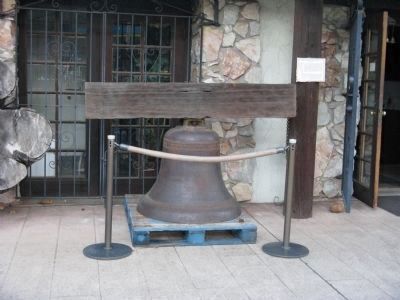 Photographed By Syd Whittle, November 7, 2008
3. Placerville Bell
The bell is currently on display at the El Dorado County Historical Museum on Placerville Drive. 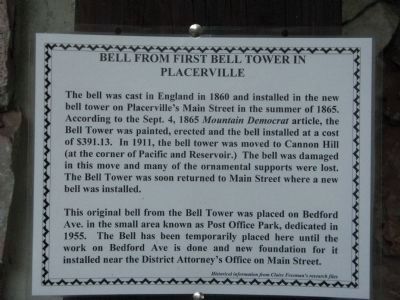 Photographed By Syd Whittle, November 7, 2008
4. Signage Discribing the Temporary Display of the Bell
Bell from Original Bell Tower in
Placerville
The bell was cast in England in 1860 and installed in the new bell tower on Placerville's Main Street in the summer of 1865. According to the Sept.4, 1865 Mountain Democrat article, the Bell Tower was painted, erected and the bell installed at a cost of $391.13. In 1911, the bell tower was moved to Cannon Hill (at the corner of Pacific and Reservoir.) The Bell was damaged in this move and many of the ornamental supports were lost. The Bell Tower was soon returned to Main Street where a new bell was installed.
This original bell from the Bell Tower was placed on Bedford Ave. in the small area known as Post Office Park, dedicated in 1955. The Bell has been temporarily placed here until the work on Bedford Ave. is done and a new foundation for it installed near the District Attorney's Office on Main Street. 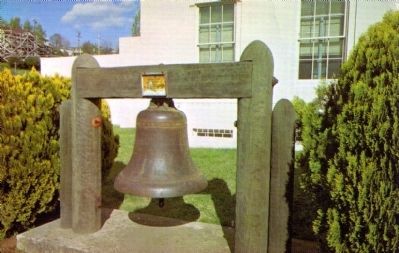