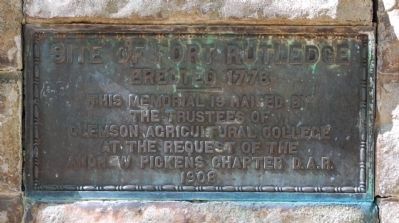 Erected 1908 by Trustees of Clemson Agricultural College at the Request of the Andrew Pickens Chapter, D.A.R.

Topics and series. This historical marker is listed in these topic lists: Colonial Era • Forts and Castles • War, US Revolutionary. In addition, it is included in the Daughters of the American Revolution (DAR) series list. A significant historical year for this entry is 1776.

Location. 34° 40.133′ N, 82° 51.033′ W. Marker is in Clemson, South Carolina, in Pickens County. Marker is on Dyke Road. Marker is located on a replica of the fort at the end of Dyke Road, approximately 50 yards into the woods. Touch for map. Marker is in this post office area: Clemson SC 29634, United States of America. Touch for directions. 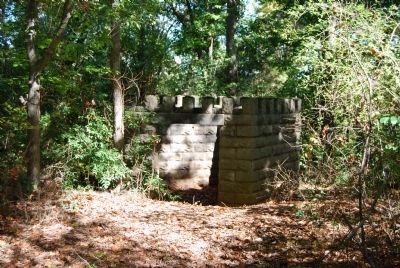 Regarding Site of Fort Rutledge. The fort was erected in 1776 by Patriot troops under the command of General Andrew Williamson. He was battling Cherokee allied with the British. The exact location of Fort Ruthledge is unknown. Some say it is under the waters of Lake Hartwell. Others argue that it where Tillman Hall now stands. The drive to the fort is especially beautiful. The road crosses a dyke over the lake and features a clear view of the waters and shoreline of Oconee County in the distance. It was this fort that provided John C. Calhoun the inspiration to name his nearby plantation Fort Hill.

In the early days of the war, the terms "Indian troubles" and "civil war" took on whole new meanings as Patriots and Loyalists each vied for the allegiance of the Cherokees. At Lindley's Fort, while Loyalists, dressed and painted as Indians, fought alongside the Cherokee in an attack against Patriot soldiers and settlers. Maj. Andrew Williamson, who had been in command of the Patriots at Ninety Six, planned an attack on Alexander Cameron, the British Indian agent who was camped on Onconore creek, but the Indians were waiting for Williamson and his men as they crossed the Keowee River at Esseneca. Positioning his forces in houses and behind fences and trees, Cameron caught the Patriots by surprise and was easily able to rout them. Major Williamson's horse was shot out from under him, but the day was saved by Col. LeRoy Hammond, who rallied about 20 men and ordered them to charge the fence where the heaviest fire was coming from. The Indians were so startled by the sudden turn of events that they dropped their arms and fled into the woods. after the battle, numerous Indian towns on the frontier fell to the Patriot forces stationed at Fort Rutledge. (Source: South Carolina's Revolutionary War Battlefields: A Tour Guide (2002), R.L. Barbour, pages 20-21)
— Submitted November 14, 2008, by Brian Scott of Anderson, South Carolina.
Credits. This page was last revised on June 16, 2016. It was originally submitted on October 31, 2008, by Brian Scott of Anderson, South Carolina. This page has been viewed 4,985 times since then and 172 times this year. Photos:   1, 2. submitted on October 31, 2008, by Brian Scott of Anderson, South Carolina.
Share this page.