Timeline of a Train

(left panel)
The Luraville Locomotive is a rare example of the early American wood-burning “Iron Horses,” which helped carve the United States out of the wilderness in the pre-Civil War era.

The Eight-wheeled, 10-ton engine was built sometime between 1850 and 1855, making it one of the oldest surviving steam engines in the United States.

Experts suggest the engine probably pulled passenger cars in its early years. However, almost 50 years after being built, the locomotive went to work as a logging engine in North Florida. This career ended abruptly in the late 1890s after an accident caused the engine to fall into the Suwannee River.

James Lancaster of Luraville, Florida recovered the engine in 1979. Later, the locomotive was sold to Mr. Jack Goyke of Jacksonville, Florida who donated the steam engine to the Florida Department of Agriculture and Consumer Services, Division of Forestry in 1982.

Efforts to honor the Luraville Locomotive with a state historic site marker began in 2009. Later, Agriculture Commissioner Adam H. Putnam and the Florida Forest Service designed and built the 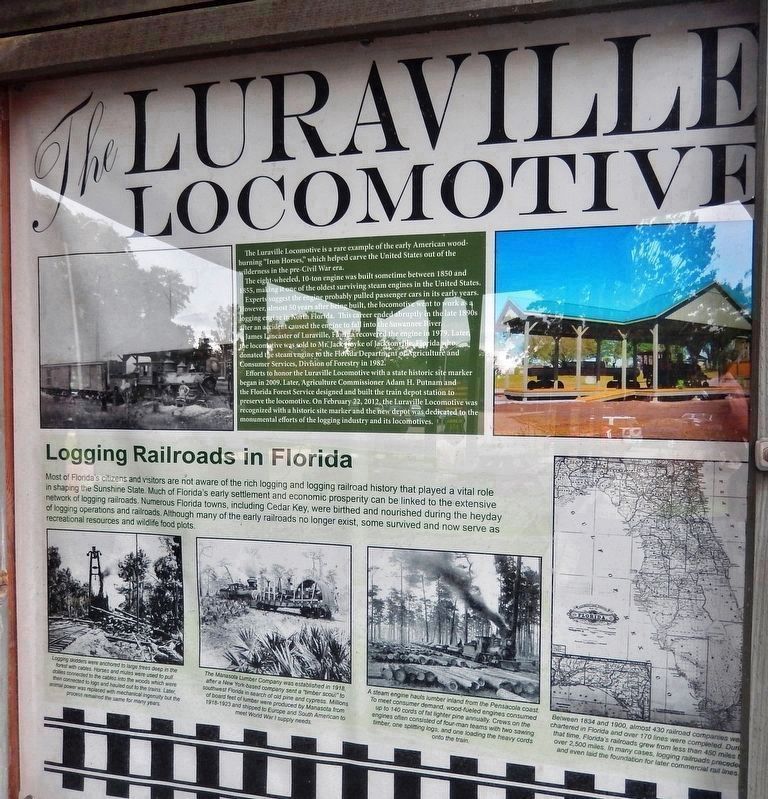 Click or scan to see
this page online
train depot station to preserve the locomotive. On February 22, 2012, the Luraville Locomotive was recognized with a historic site marker and the new depot was dedicated to the monumental efforts of the logging industry and its locomotives.

Logging Railroads in Florida
Most of Florida's citizens and visitors are not aware of the rich logging and logging railroad history that played a vital role in shaping the Sunshine State. Much of Florida's early settlement and economic prosperity can be linked to the extensive network of logging railroads. Numerous Florida towns, including Cedar Key, were birthed and nourished during the heyday of logging operations and railroads. Although many of the early railroads no longer exist, some survived and now serve as recreational resources and wildlife food plots.

(photo captions)
• Logging skidders were anchored to large trees deep in the forest with cables. Horses and mules were used to pull dollies connected to the cables into the woods which were then connected to logs and hauled out to the trains. Later, animal power was replaced with mechanical ingenuity but the process remained the same for many years.
• The Manasota Lumber Company was established in 1918, after a New York-based company sent a "timber scout" to southwest Florida in search of old pine and cypress. Millions of board feet of lumber 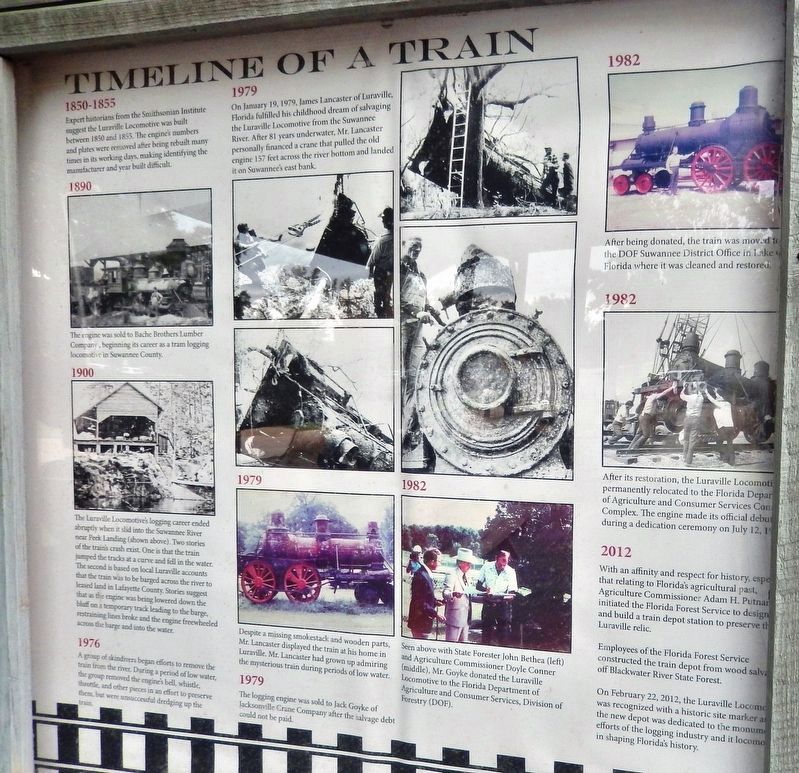 Photographed By Cosmos Mariner, November 14, 2018
3. The Luraville Locomotive Marker (right panel)
• Timeline of a Train •
were produced by Manasota from 1918-1923 and shipped to Europe and South America to meet World War I supply needs.
• A steam engine hauls lumber inland from the Pensacola coast. To meet consumer demand, wood-fueled engines consumed up to 140 cords of fat lighter pine annually. Crews on the engines often consisted of four-man teams with two sawing timber, one splitting logs, and one loading the heavy cords onto the train.
• Between 1834 and 1900, almost 430 railroad companies were chartered in Florida and over 170 lines were completed. During that time, Florida’s railroads grew from less than 450 miles to over 2,500 miles. In many cases, logging railroads preceded and even laid the foundation for later commercial rail lines.

(right panel)
Timeline of a Train
1850-1855
Expert historians from the Smithsonian Institute suggest the Luraville Locomotive was built between 1850 and 1855. The engine’s numbers and plates were removed after being rebuilt many times in its working days, making identifying the manufacturer and year built difficult.

1890
The engine was sold to Bache Brothers Lumber Company, beginning its career as a tram logging locomotive in Suwannee County.

1900
The Luraville Locomotive's logging career ended abruptly when it slid into the Suwannee River near Peek Landing. Two stories 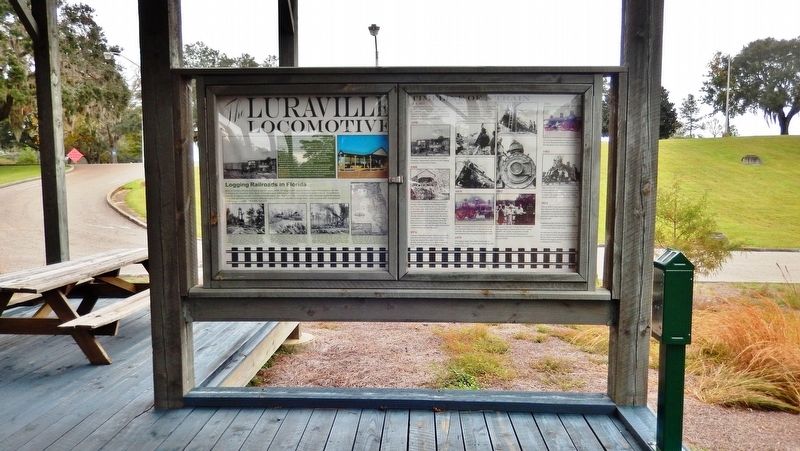 Photographed By Cosmos Mariner, November 14, 2018
4. The Luraville Locomotive Marker (wide view)
of the train's crash exist. One is that the train jumped the tracks at a curve and fell in the water. The second is based on local Luraville accounts that the train was to be barged across the river to leased land in Lafayette County. Stories suggest that as the engine was being lowered down the bluff on a temporary track leading to the barge, restraining lines broke and the engine freewheeled across the barge and into the water.

1976
A group of skindivers began efforts to remove the train from the river. During a period of low water, the group removed the engine’s bell, whistle, throttle, and other pieces in an effort to preserve them, but were unsuccessful in dredging up the train.

1979
On January 19, 1979, James Lancaster of Luraville, Florida fulfilled his childhood dream of salvaging the Luraville Locomotive from the Suwannee River. After 81 years underwater, Mr. Lancaster personally financed a crane that pulled the old engine 157 feet across the river bottom and landed it on Suwannee’s east bank.

Despite a missing smokestack and wooden parts, Mr. Lancaster displayed the train at his home in Luraville. Mr. Lancaster had grown up admiring the mysterious train during periods of low water.

The logging engine was sold to Jack Goyke of Jacksonville Crane Company after the salvage debt could not be paid. 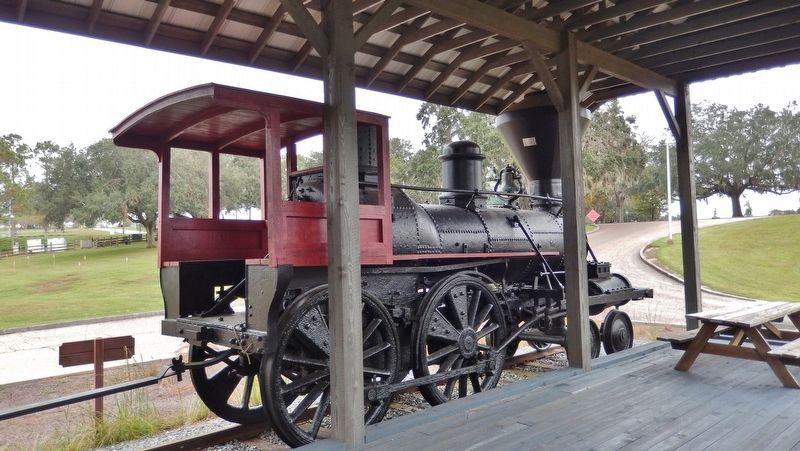 After being donated, the train was moved to the DOF Suwannee District Office in Lake City, Florida where it was cleaned and restored.

After its restoration, the Luraville Locomotive permanently relocated to the Florida Department of Agriculture and Consumer Services Conner Complex. The engine made its official debut during a dedication ceremony on July 12, 1983.

2012
With an affinity and respect for history, especially that relating to Florida's agricultural past, Agriculture Commissioner Adam H. Putnam initiated the Florida Forest Service to design and build a train depot station to preserve the Luraville relic.

On February 22, 2012, the Luraville Locomotive was recognized with a historic site marker and the new depot was dedicated to the monumental efforts of the logging industry and its locomotives in shaping Florida's history. 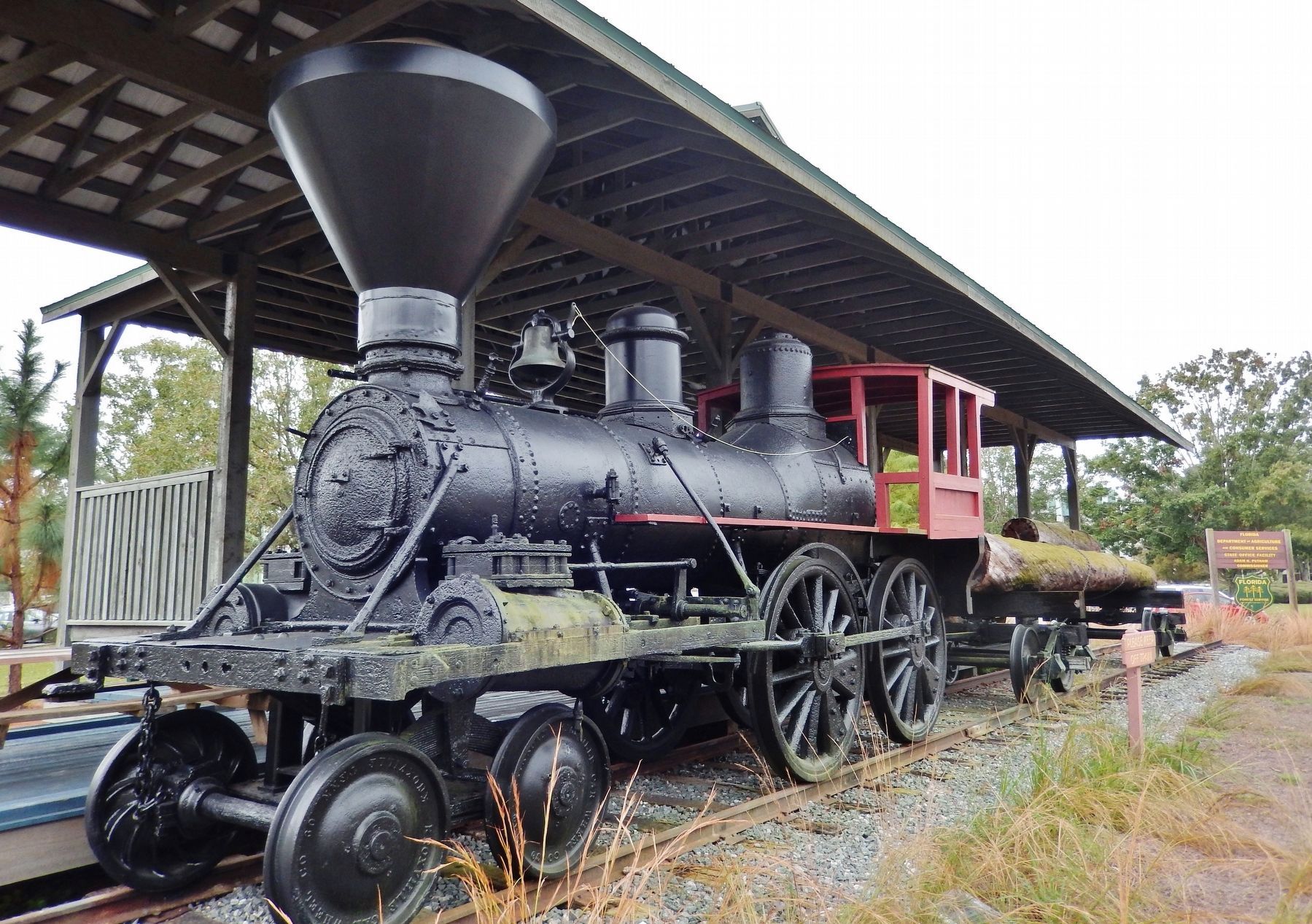 Photographed By Cosmos Mariner, November 14, 2018
6. The Luraville Locomotive (back side of marker visible beyond locomotive, at left)
• Railroads & Streetcars.

Location. 30° 26.345′ N, 84° 13.402′ W. Marker is in Tallahassee, Florida, in Leon County. Marker can be reached from Conner Boulevard, 0.2 miles east of Capital Circle Southeast (U.S. 319), on the right when traveling east. Marker is located at the Luraville Locomotive exhibit near the Florida Forest Service State Office Facility. Touch for map. Marker is at or near this postal address: 3125 Conner Boulevard, Tallahassee FL 32399, United States of America. Touch for directions.