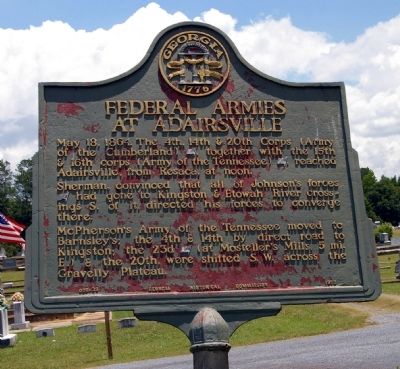 By David Seibert, June 30, 2008
1. Federal Armies at Adairsville Marker
Inscription.
Federal Armies at Adairsville. . May 18, 1864, The 4th, 14th and 20th Corps (Army of the Cumberland) [US] together with the 15th &16th corps (Army of the Tennessee) [US] reached Adairsville from Resaca, at noon., Sherman convinced that all of Johnston's forces had gone to Kingston and Etowah River crossings S. of it, directed his forces to converge there., McPherson's Army of the Tennessee moved to Barnsley's; the 4th and 14th by direct road to Kingston; the 23rd [US] (at Mosteller's Mills, 5 mi. E.) and the 20th, were shifted S.W. across the Gravelly Plateau. . This historical marker was erected in 1953 by Georgia Historical Commission. It is in Adairsville in Bartow County Georgia

Sherman convinced that all of Johnston's forces had gone to Kingston & Etowah River crossings S. of it, directed his forces to converge there.

Topics and series. This historical marker is listed in this topic list: War, US Civil. In addition, it is included in the Georgia Historical Society series list. A significant historical date for this entry is May 18, 1864. 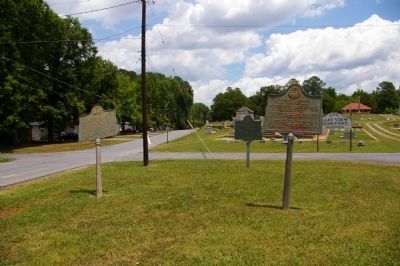 Click or scan to see
this page online
of three located in front of the East View Cemetery. Touch for map. Marker is in this post office area: Adairsville GA 30103, United States of America. Touch for directions.