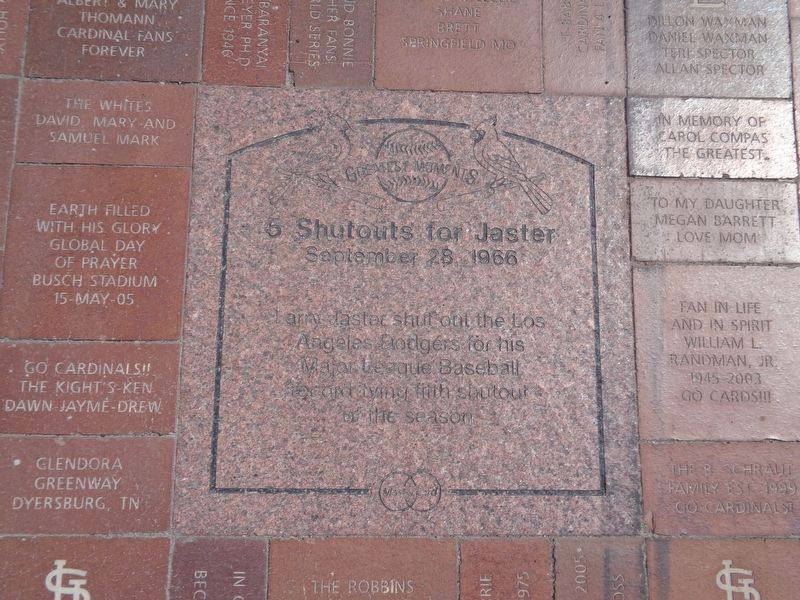 Larry Jaster shut out the Los Angeles Dodgers for his Major League Baseball record-tying fifth shutout of the season.

Topics and series. This historical marker is listed in this topic list: Sports. In addition, it is included in the Missouri, St. Louis Cardinals Greatest Moments series list. A significant historical date for this entry is September 28, 1966.

Click or scan to see
this page online
. Jaster played for the St. Louis Cardinals from September 17, 1965 to the end of the 1968 season. He would be part of the 1967 World Series winning team, but was remembered for giving up a grand slam to Jim Northrup (Detroit Tigers) in Game 6 of the 1968 World Series (won by the Tigers). Jaster would later play for the Montreal Expos and the Atlanta Braves, and would retire from MLB in 1972. (Submitted on July 23, 2020, by Jason Voigt of Glen Carbon, Illinois.)
Credits. This page was last revised on July 23, 2020. It was originally submitted on May 3, 2019, by Devry Becker Jones of Washington, District of Columbia. This page has been viewed 90 times since then and 9 times this year. Photo   1. submitted on July 23, 2020, by Jason Voigt of Glen Carbon, Illinois.
Share this page.