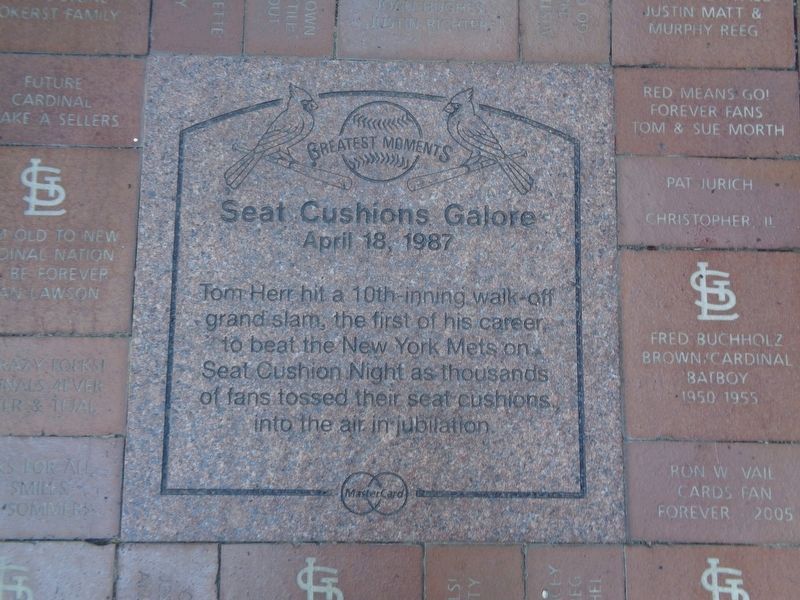 Tom Herr hit a 10th-inning walk-off grand slam, the first of his career to beat the New York Mets on Seat Cushion Night as thousands of fans tossed their seat cushions into the air in jubilation.

Topics and series. This historical marker is listed in this topic list: Sports. In addition, it is included in the Missouri, St. Louis Cardinals Greatest Moments series list. A significant historical date for this entry is April 18, 1987.

1. NYM@STL: Herr hits a walk-off grand slam (video). From MLB's YouTube channel, this shows Herr's grand slam as well as the fans throwing their cushions onto the field. (Submitted on August 1, 2020, by Jason Voigt of Glen Carbon, Illinois.)

2. Tom Herr on Wikipedia. Wiki page for the St. Louis Cardinals Hall of Famer, who played for that team from 1979 to 1988. He retired in 1991 with one of the highest all-time career fielding percentages (.989) for a second baseman in the National League. (Submitted on August 1, 2020, by Jason Voigt of Glen Carbon, Illinois.)

Additional keywords. baseball, Major League Baseball, St. Louis Cardinals
Credits. This page was last revised on August 1, 2020. It was originally submitted on May 4, 2019, by Devry Becker Jones of Washington, District of Columbia. This page has been viewed 88 times since then and 10 times this year. Photo   1. submitted on August 1, 2020, by Jason Voigt of Glen Carbon, Illinois.
Share this page.