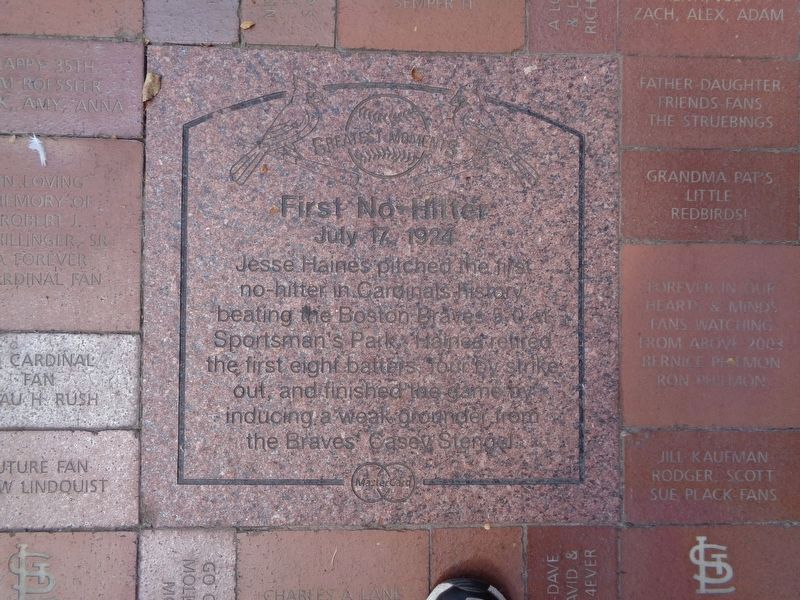 Jesse Haines pitched the first no-hitter in Cardinals history, beating the Boston Braves 5-0 at Sportsman's Park. Haines retired the first eight batters, four by strike out, and finished the game by inducing a weak grounder from the Braves' Casey Stengel.

Topics and series. This historical marker is listed in this topic list: Sports. In addition, it is included in the Missouri, St. Louis Cardinals Greatest Moments series list. A significant historical date for this entry is July 17, 1924.

Regarding First No-Hitter. This was the first of ten no-hitters for the St. Louis Cardinals. The most recent (as of September 2020) was on September 3, 2001 (pitched by Bud Smith).

Also see . . .  Jesse Haines on Wikipedia. Haines (1893-1978) spent most of his career with the Cardinals, and pitched on three World Championship teams. He was elected to the Baseball Hall of Fame in 1970 by the Veterans Committee, which was controversial because some of his former teammates served on the committee. Haines was elected to the Cardinals Hall of Fame in 2014. (Submitted on September 3, 2020, by Jason Voigt of Glen Carbon, Illinois.)

Additional keywords. baseball, Major League Baseball
Credits. This page was last revised on September 3, 2020. It was originally submitted on May 4, 2019, by Devry Becker Jones of Washington, District of Columbia. This page has been viewed 87 times since then and 7 times this year. Photo   1. submitted on September 3, 2020, by Jason Voigt of Glen Carbon, Illinois.
Share this page.