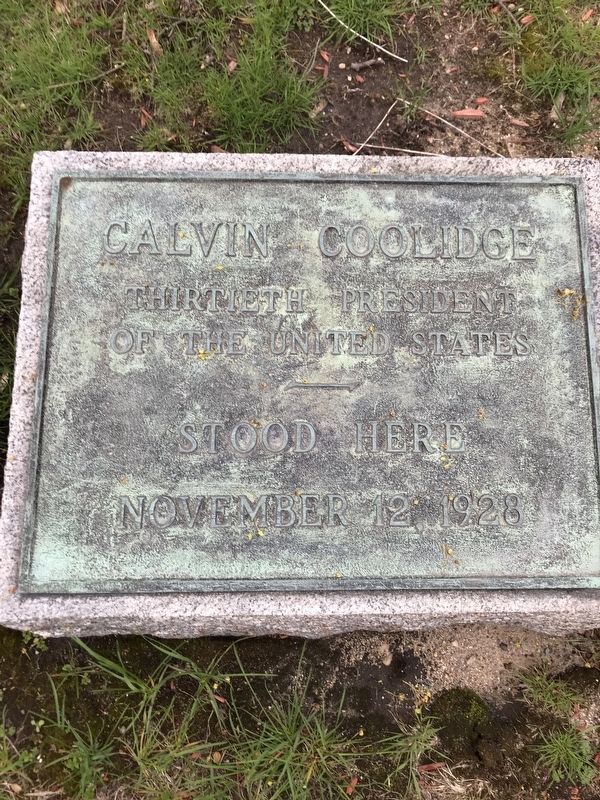 Topics and series. This historical marker is listed in this topic list: Government & Politics. In addition, it is included in the Former U.S. Presidents: #30 Calvin Coolidge series list.

Location. 42° 35.155′ N, 71° 48.306′ W. Marker is in Fitchburg, Massachusetts, in Worcester County. Marker is on Main Street, in the median. Stone in ground on the Upper Common (island between 2 sides of Main Street), across from Post Office where the War Memorials are located. Touch for map. Marker is at or near this postal address: across from 881 Main St, Fitchburg MA 01420, United States of America. Touch for directions. 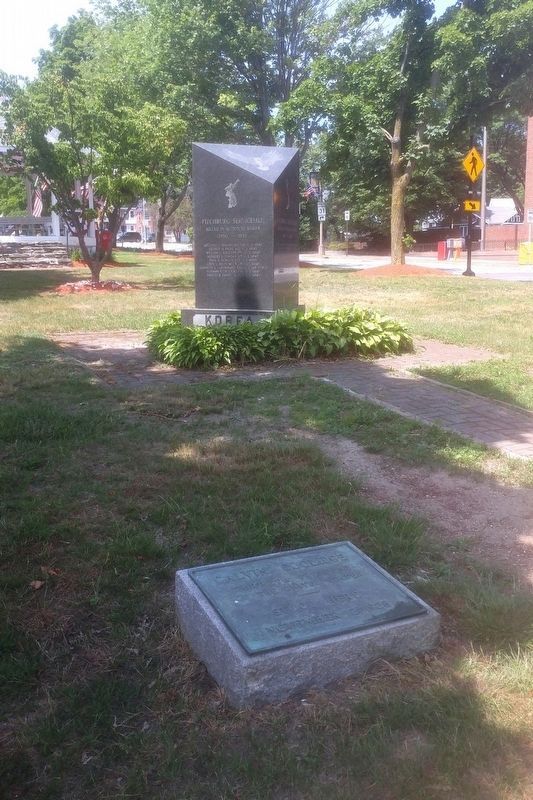 By Richard Albright, July 7, 2020
2. Calvin Coolidge Marker with Korean War monument in the background
(approx. ¼ mile away); The Store of Ephraim Kimball (approx. half a mile away); First Settler of Fitchburg (approx. 0.6 miles away). Touch for a list and map of all markers in Fitchburg.

Also see . . .  A trip through history: When presidents came to Fitchburg (sentinelandenterprise.com, 2/19/2018). '...Susan Navarre said she hopes to position their visits in historical context as well as clarify several rumors...."There's a little bit of a mystery," she said. "I'm still researching the exact truth of the monument in Fitchburg that says Calvin Coolidge stood here Nov. 19, 1928." The memorial on the Upper Common may have a misleading date, since other records show Coolidge actually visited earlier, she said.' (Submitted on May 5, 2019.)
Credits. This page was last revised on July 14, 2020. It was originally submitted on May 4, 2019, by Darren Brosseau of Fitchburg, Massachusetts. This page has been viewed 132 times since then and 21 times this year. Photos:   1. submitted on May 4, 2019, by Darren Brosseau of Fitchburg, Massachusetts.   2. submitted on July 13, 2020, by Richard Albright of Phillipston, Massachusetts. • Andrew Ruppenstein was the editor who published this page.
Share This Page.