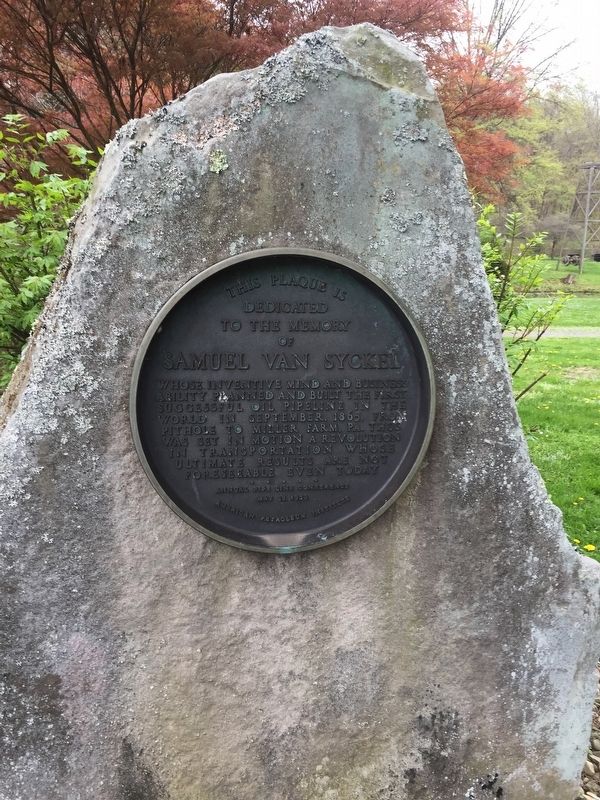 Photographed By Steve Stoessel, May 4, 2019
1. Samuel Van Syckel Marker
Inscription.
Samuel Van Syckel. . , This plaque is dedicated to the memory of Samuel Van Syckel whose inventive mind and business ability planned and built the first successful oil pipeline in the world in September, 1865, from Pithole to Miller Farm, PA. Thus was set in motion a revolution in transportation whose ultimate results are not foreseeable even today., Annual Pipe Line Conference, May 15, 1959 . This historical marker was erected in 1959 by American Petroleum Institute. It is Near Titusville in Venango County Pennsylvania

This plaque is dedicated to the memory of Samuel Van Syckel whose inventive mind and business ability planned and built the first successful oil pipeline in the world in September, 1865, from Pithole to Miller Farm, PA. Thus was set in motion a revolution in transportation whose ultimate results are not foreseeable even today.

Topics. This historical marker is listed in this topic list: Industry & Commerce. A significant historical month for this entry is September 1865.

Location. 41° 36.656′ N, 79° 39.453′ W. Marker is near Titusville, Pennsylvania, in Venango County. Marker can be reached from Museum Lane. At Drake Well Park. Touch for map. Marker is in this post office area: Titusville PA 16354, United States of America. Touch for directions. 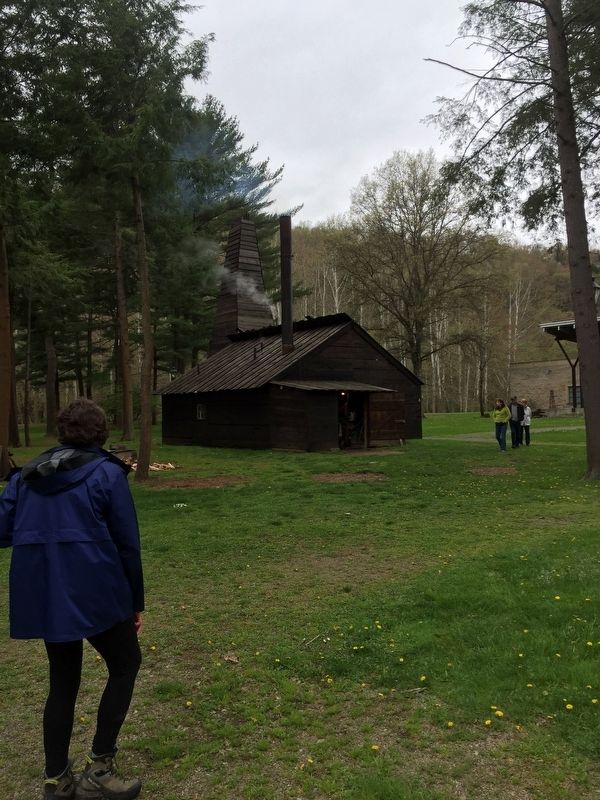 Also see . . .
1. Oil History. In 1865 Van Syckel laid about 5 miles of two-inch wrought iron pipe in 15 foot joints from Miller Farm RR Station on the west side of Oil Creek in a southeast direction to Pithole. This was in hilly terrain of about 400 feet relief, but over half of that was in the descent from the flanking ridge to Oil Creek. The joints cost $50 apiece and were tested to a pressure of 900 barrels to the square inch. They were lap welded. William Snow was Van Syckel's engineer who determined the specifications of the pipe and the manner of laying it. Part of the pipeline was buried to two feet, and the rest was laid on top of the ground. Once it was in place, Van Syckel installed three Reed and Cogswell steam pumps, two of these at Pithole and the other nearby. These pumps pushed the oil at a rate of 81 barrels per hour to Miller Farm beginning October 10, 1865. About 1950 to 2000 barrels were arriving by the pipeline at the terminal daily, thus creating a need for more storage tanks. A fourth pump was installed at a later date at the Cherry Run crossing. This extra pump was estimated to increase the delivery of crude by 25 percent bringing the line's 24 hour delivery to 2500 barrels. Mechanical problems were minor and could be easily fixed.

This pipeline was the first successful one in the oil regions considering distance, topographical relief, pumps and rate of flow. It was a revolutionary means of transporting oil. It signaled the end of the teamsters' local monopoly and soon was followed by more pipelines laid hither and yon by a rash of newly formed companies. Van Syckel, seeing the gratifying remuneration of his pipeline (he charged $1.00 per barrel delivered to Miller Farm) laid another one practically parallel to it except that the terminal was at Meridith, a settlement on the east bank of Oil Creek directly opposite Miller Farm. The second line became operational on December 8, 1865. (Submitted on May 8, 2019, by Steve Stoessel of Niskayuna, New York.)