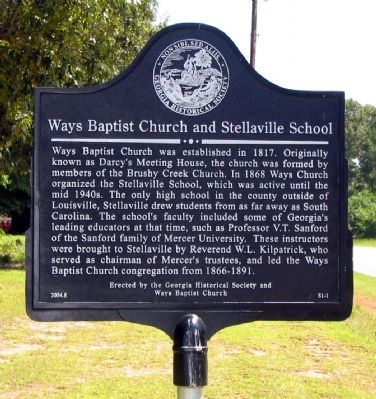 Ways Baptist Church was established in 1817. Originally known as Darcy’s Meeting House, the church was formed by members of the Brushy Creek Church. In 1868 Ways Church organized the Stellaville School, which was active until the mid 1940s. The only high school in the county outside of Louisville, Stellaville drew students from as far away as South Carolina. The school’s faculty included some of Georgia’s leading educators at that time, such as Professor V.T. Sanford of the Sanford family of Mercer University. These instructors were brought to Stellaville by Reverend W.L. Kilpatrick, who served as chairman of Mercer’s trustees, and led the Ways Baptist Church congregation from 1866-1891.

Topics and series. This historical marker is listed in these topic lists: Churches & Religion • Education. In addition, it is included in the Georgia Historical Society series list. 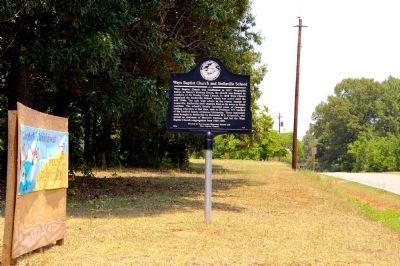 By David Seibert, June 7, 2011
2. Ways Baptist Church and Stellaville School Marker
Looking north, with Campground Road on the right
20.013′ W. Marker is near Wrens, Georgia, in Jefferson County. Marker is on Campground Road 0.7 miles south of Waynesboro Road (Georgia Route 80), on the right when traveling south. Touch for map. Marker is at or near this postal address: 4991 Campground Rd, Wrens GA 30833, United States of America. Touch for directions.