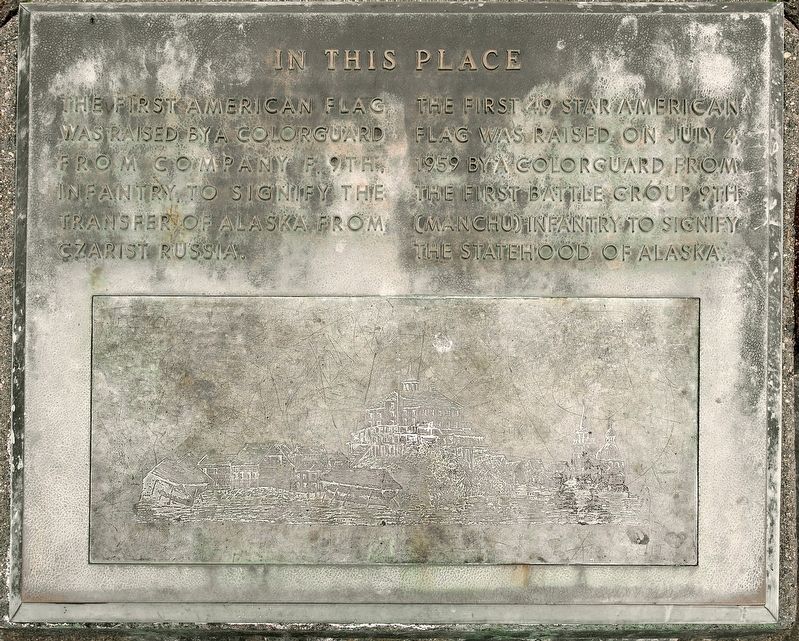 Photographed By Alvis Hendley, May 16, 2011
1. First American Flags in Sitka - 1867 and 1959
Inscription.
In This Place. . , The first American flag was raised by a colorguard from Company F, 9th Infantry, to signify the transfer of Alaska from czarist Russia. , The first 49 star American flag was raised on July 4, 1959, by a colorguard from the First Battle Group 9th (Manchu) Infantry to signify the statehood of Alaska. . This historical marker is in Sitka in Sitka Borough Alaska

The first American flag was raised by a colorguard from Company F, 9th Infantry, to signify the transfer of Alaska from czarist Russia.

The first 49 star American flag was raised on July 4, 1959, by a colorguard from the First Battle Group 9th (Manchu) Infantry to signify the statehood of Alaska.

Topics. This historical marker is listed in these topic lists: Notable Events • Settlements & Settlers. A significant historical date for this entry is October 18, 1867.

Location. 57° 2.918′ N, 135° 20.283′ W. Marker is in Sitka, Alaska, in Sitka Borough. The marker is located on Castle Hill. It can be reached by climbing a stairway from Lincoln Street near the Post Office, a moderne building which is listed on the National Register of Historic Places. Touch for map. Marker is in this post office area: Sitka AK 99835, United States of America. Touch for directions. 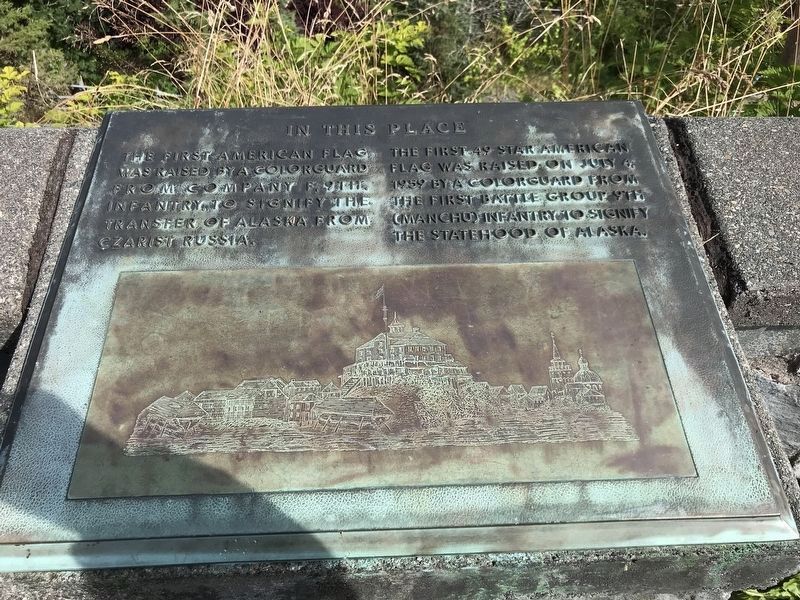 Photographed By Duane and Tracy Marsteller, September 1, 2021
2. In This Place Marker

Prior to the arrival of Europeans in the area, Castle Hill was occupied by families of the Kiksadi clan of Tlingits. Alexander Baranov, a leading figure in the Russian-American Company, arrived in the Sitka area in 1795, and sought to establish a trading post on the hill. He ended up establishing Redoubt St. Archangel Michael several miles away in 1799; this trading post was destroyed by the Tlingit in 1802. Baranov returned to Sitka in force in 1804, seized Castle Hill, from which the outnumbered Tlingit had withdrawn. After the six-day Battle of Sitka, the Tlingit formally ceded Castle Hill to the Russians. In 1806 the Russians transferred the headquarters of the Russian-American Company and the seat of government of Russian Alaska to Sitka, and Castle Hill was the focal point of the company and government facilities until 1867. They destroyed the Tlingit houses on the hill, and built a succession of structures on the hill's summit. 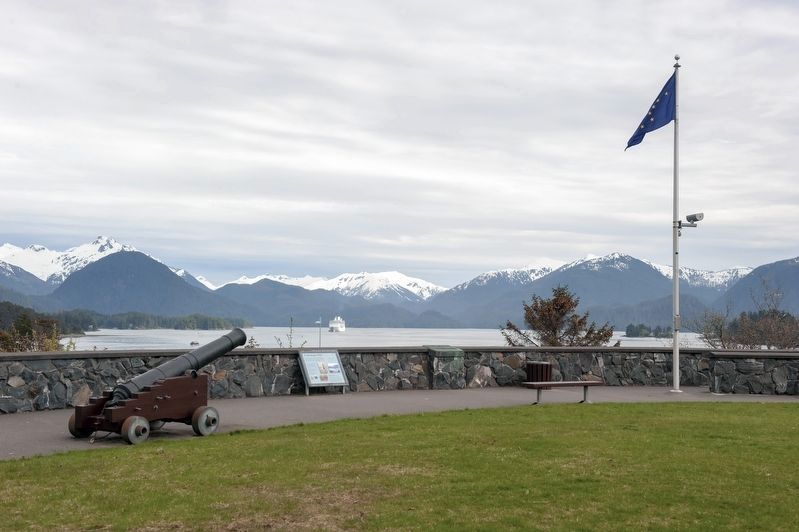 Photographed By Alvis Hendley, June 16, 2011
3. Castle Hill in Sitka
"American Flag Raising Site"
National Register of Historic Places Nomination Form
Click for more information.
The last of these, a two-story brick building with a cupola on top known as the Governor's House, was built in 1836 and was destroyed by fire in 1894. In 1867, after the Alaska Purchase was negotiated, Russian Alaska was formally transferred to the United States in a ceremony held on Castle Hill. The Russian-built Governor's House was occupied by United States Army commanders until 1877, and remained a center of US government administration until the building burned. In 1898 the hill was transferred to the United States Department of Agriculture, which built a structure on the hill which served as its Alaska headquarters until 1932. This building was then used for a variety of commercial purposes before it was demolished in 1955. The site was then designated a territorial park. When Alaska was admitted as the 49th U.S. state in 1959, Castle Hill was the location where the first 49-star U.S. flag in Alaska was raised, though the ceremony was unofficial and secret. The site was declared a National Historic Landmark in 1962 and was added to the National Register of Historical Places in 1966. In 1965 a stone parapet was constructed on the hill, and interpretive plaques were added to a display of six cannons and a flagpole. The property is now administered as part of the Alaska state park system

Photographed By Alvis Hendley, May 16, 2011
4. Engraving on Marker
The engraving is worn and dirty. This is a crop of Photo No. 1 enhanced with high contrast to more clearly show the engraving.
2. Alaska Purchase. Wikipedia entry:
First person account of the transfer “written by a blacksmith named T. Ahllund, who had been recruited to work in Sitka only less than two years previously:”

We had not spent many weeks at Sitka when two large steam ships arrived there, bringing things that belonged to the American crown, and a few days later the new governor also arrived in a ship together with his soldiers. The wooden two-story mansion of the Russian governor stood on a high hill, and in front of it in the yard at the end of a tall spar flew the Russian flag with the double-headed eagle in the middle of it. Of course, this flag now had to give way to the flag of the United States, which is full of stripes and stars. On a predetermined day in the afternoon a group of soldiers came from the American ships, led by one who carried the flag. Marching solemnly, but without accompaniment, they came to the governor's mansion, where the Russian troops were already lined up and waiting for the Americans. Now they started to pull the [Russian double-headed] eagle down, but—whatever had gone into its head—it only came down a little bit, and then entangled its claws around the spar so that it could not be pulled down any further. A Russian soldier was therefore ordered to climb up the spar and disentangle it, but it seems that the 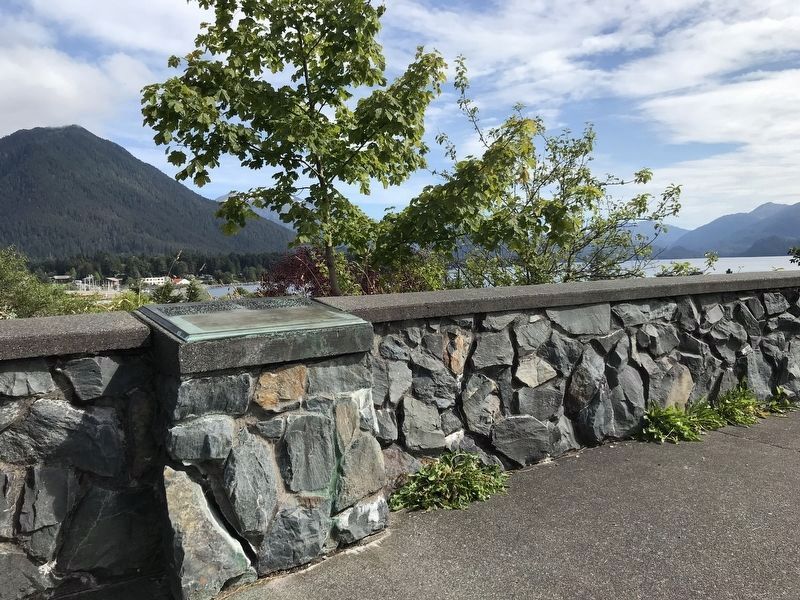 Photographed By Duane and Tracy Marsteller, September 1, 2021
5. In This Place Marker
eagle cast a spell on his hands, too—for he was not able to arrive at where the flag was, but instead slipped down without it. The next one to try was not able to do any better; only the third soldier was able to bring the unwilling eagle down to the ground. While the flag was brought down, music was played and cannons were fired off from the shore; and then while the other flag was hoisted the Americans fired off their cannons from the ships equally many times. After that American soldiers replaced the Russian ones at the gates of the fence surrounding the Kolosh [Tlingit] village. 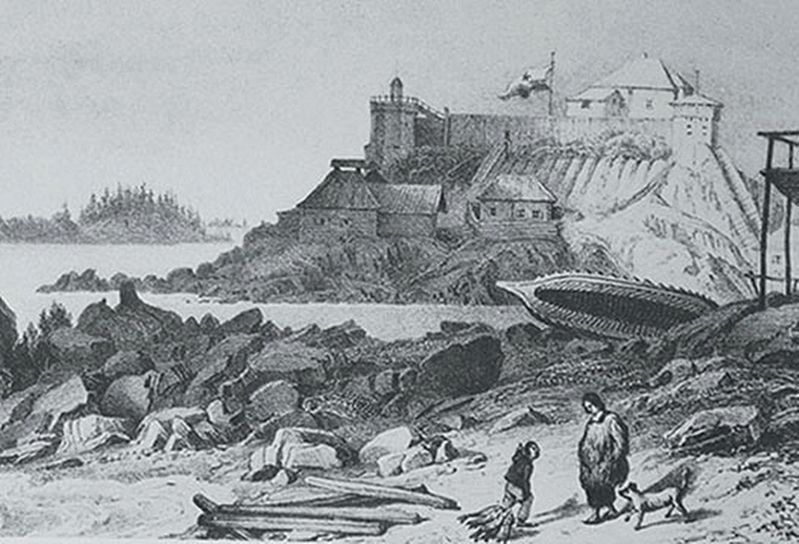 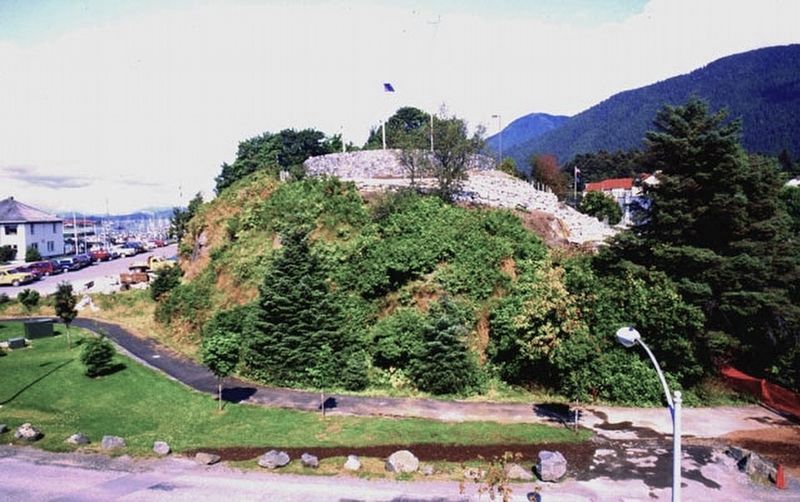