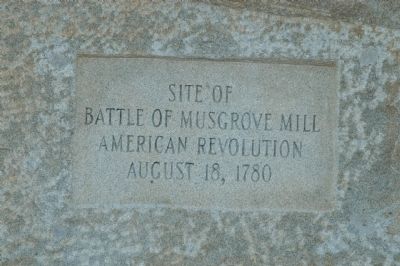 Topics. This historical marker is listed in these topic lists: Colonial Era • War, US Revolutionary. A significant historical year for this entry is 1780.

Location. 34° 35.58′ N, 81° 50.972′ W. Marker is near Clinton, South Carolina, in Laurens County. Marker is on State Highway 56, half a mile north of State Park Road, on the left when traveling north. Marker is just before the south end of the bridge over the Enoree River. Touch for map. Marker is in this post office area: Clinton SC 29325, United States of America. Touch for directions. 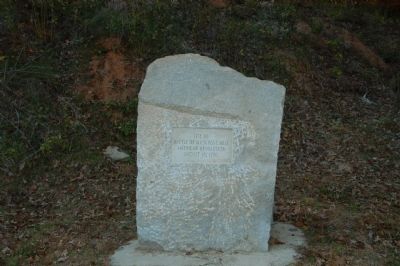 If early American history is your beat, a fall trip to Musgrove Mill State Historic Site in Clinton will likely give you a fresh, first-hand perspective on the Revolutionary War and the upper South Carolina militia forces that fought in it.

On Sept. 20, as part of the State Park Service's 75th anniversary, the South Carolina Rangers re-enactment unit will be on hand in period clothing to portray the lifestyle, arms, equipment, and strategy used by the Carolina militia in the revolution's Battle of Musgrove's Mill. 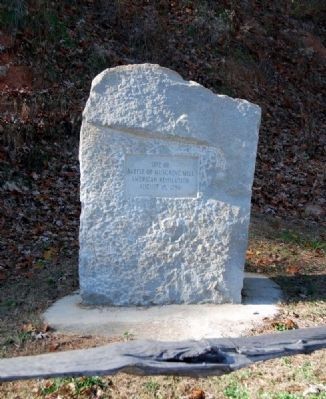 Photographed By Brian Scott, November 22, 2008
3. Battle of Musgrove Mill Marker
have 10-15 rangers on hand and they'll be focusing on frontier backcountry militia," said site manager Brian Robson. " The park only opened in 2003, and they've been here every year since then for this kind of portrayal."

At the time of the battle, the site was part of 360 acres owned by Edward Musgrove, who had acquired the property through a land grant by King George III of England.

Because of its proximity to the Enoree River, a nearby grist mill, and a wagon road leading to the coast, the site was an ideal spot for a military camp, which British forces set up in August 1780 during their southern campaign of the war.

At first the coming fight appeared to be uneven.

The British were well-trained and professional soldiers, well-versed in battle positions and military strategy. The militia were a loosely organized band of patriots who simply showed up whenever needed, pointed their guns, and fired them whenever someone yelled fire.

The British also had more guns, more ammunition, and more fighters - they and their Tory allies (Americans supporting Britain) outnumbered the militia 500-200.

But the militia had the advantage of surprise and in knowing the terrain, using their knowedge of streams, woods, and trails to slow British 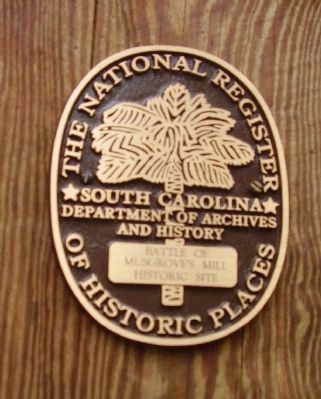 The militia then lured the British away from their encampment and across the river to open, high ground, which was critical to a battle.

At the right moment, someone yelled "Fire!" - and fire they did.

From first shot to last, the battle lasted only about 15 minutes, but the British forces retreated back across the river after some of their officers were either injured or killed.

When it was over, the British counted 60 killed, 90 wounded, and 70 taken prisoner. Only four Americans were killed and only nine were wounded. Eventually, the militia was forced to retreat to the mountains of North Carolina when Loyalist forces converged on the area.

But the battle of Musgrove Mill, occurring a few days after a British win at Camden, was considered a patriot victory and gave the American cause a timely boost in morale. In 1975, the site was listed on the U.S. national Register of Historic Places.

"It was an early turning point in the southern campaign," Robson said. "And it set the stage for bigger battles - such as Cowpens and King's Mountain - which followed."

After the ranger's portrayal, you can go for a walk along a 2 1/2 mile loop trail along the southern bank of the Enoree River that includes most of what was the property in 1780.

Points of interest as identified along this trail include: the Mary 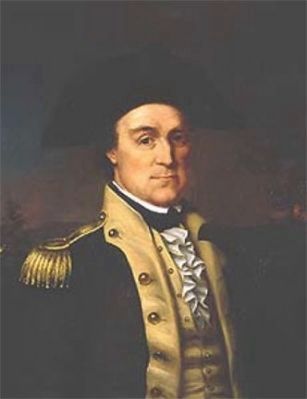 Photographed By Rembrandt Peale
5. Col. Elijah Clark
1742 – December 15, 1799
Musgrove Monument, the location of the original ford on the Enoree River, the site of the Musgrove's grist mill, and ruins of the Musgrove home.

If you've ever wondered how archaeologists find and identify artifacts from Revolutionary War battlefields, this experience will help you learn more about methods and studies used by archeologists to separate the real stuff from the ordinary.

Project archaeologists will be on-site showing some of the relics that have been found at the Musgrove battle site and discussing how they found and identified the artifacts.

Tours will be offered throughout the day and feel free to bring your kids and let them participate in some hands-on activities as they "dig" for artifacts.

"We also have an educational center, a small picnic area and a small waterfall on the site," Robson said. "And for anyone who is a history buff, a trip to the Musgrove site would really be time swell spent."
— Submitted August 9, 2009, by Brian Scott of Anderson, South Carolina.
2. Battle of Musgrove's Mill Anniversary Celebration
On Saturday, August 15, 2009, Musgrove Mill State Historic Site will be presenting the Battle 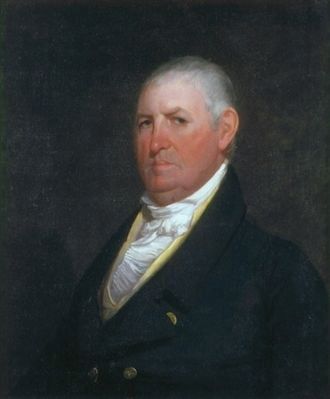 Photographed By Matthew H. Jouett, 1820
6. Col. Isaac Shelby
December 11, 1750 – July 18, 1826
of Musgrove's Mill Anniversary Celebration. The battle, which took place on August 19, 1780, was one of the early turning points in the Southern Campaign of the American Revolution, and stands as an excellent example of the guerilla conflict and civil war that raged in the Carolina Backcountry during America's War for independence. The event will feature an interpretive talk on the Battle of Musgrove's Mill and its significance, a period firing salute, well as commemorations by the Sons of the American Revolution and the Daughters of the American Revolution.
— Submitted August 9, 2009, by Brian Scott of Anderson, South Carolina.
3. Battle of Musgrove’s Mill Historic Site (National Register Nomination Form)
The Battle of Musgrove’s Mill occurred on the rising ground north of the Enoree River, at Musgrove’s Ford, near the present-day Spartanburg County line, and immediately east of Cedar Shoals Creek. Early 18th century maps indicate that Musgrove’s Ford was between the mouth of Cedar Shoals Creek and a large bend in the Enoree River. The old 18th century road running northwards from the ford is in approximately the same location as present-day Highway 56. The temporary fortifications built by Colonels Shelby and Clarke were about ¼ mile north of the ford along the highway. 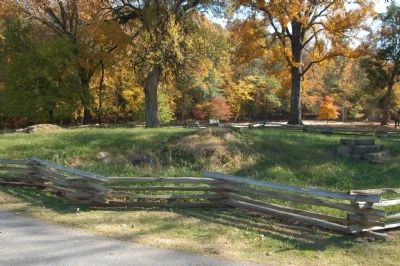 Photographed By Michael Sean Nix, November 7, 2008
7. Remains of the Musgrove Home
Musgrove’s house and mill, where the British garrison was located, was on the south side of the ford, opposite the battlefield. No above-the-surface evidence of this structure remains.

The nominated property includes the land north of the Enoree River ford, from Cedar Shoals Creek and an improved county road (S-10) east across Highway 56 to a small creek running parallel to the highway. Several houses lie along US Route 56 north of the river. Most of this land is heavily wooded with pines and hardwoods, and it slopes steadily down towards the Enoree River. The floodplains that run parallel to the river are sparsely vegetated except for large hardwood trees on the river’s edge. There are evidences of an old roadbed, crossing Cedar Shoals Creek about 700 feet from the Enoree River, but this road is not the same road that crossed the river at Musgrove’s Ford. The ford was possibly used by American scouts in crossing the creek and river to spy on the British camp.

The nominated property also includes a triangular portion of land south of the Enoree River, opposite the mouth of Cedar Shoals Creek, where Musgrove’s Plantation house was standing until it burned in 1971. A dirt road leads from S.C. Route 56 north to the house site, in a cleared area adjacent to a man-made pond. This is the area where the British and Tories were encamped at the time of the battle.

Significance
The Battle of Musgrove’s Mill, fought on August 18, 1780, was an early American victory in the South during the Revolution. American troops routed a combined detachment of British and Tories at a ford on the Enoree River but were forced to retreat to the mountains of North Carolina when Loyalist forces converged on the area after the American defeat at Camden. The American militiamen used their superior marksmanship and knowledge of the terrain to surprise the British. This indicated a weakness in the British hold on the backcountry.

In 1780 the British established a fortified post at Musgrove’s Mill, home of Major Edward Musgrove, on the south side of the Enoree River. A regular garrison of 200 men under a Major Fraser was stationed there. By August 17 the garrison has been reinforced by Abraham de Peyster of the King’s American Regiment, David Fanning and his North Carolina Tories, and Colonel Daniel Clary with his Tories from upper South Carolina. A detachment commanded by Lt. Colonel Innes had a company of the New Jersey Volunteers and a captain’s command of de Lancey’s New York Royalists. Colonel Patrick Ferguson, leader of the Tories in South Carolina, has sent wounded to the post, bringing the total detachment to about 500 men. In addition some 100 Tories of the South Carolina Regiment were camping nearby.

The American Colonel Charles McDowell of North Carolina has established a camp at Cherokee Ford, just across the South Carolina line. Believing that the British post at Musgrove’s Mill was vulnerable, McDowell decided to attack. His forces included troops led by Colonels Isaac Shelby and Elijah Clarke, from North Carolina and Georgia, and the remnants of the old Ninety Six Brigade under Colonel James Williams of South Carolina.

The American officers formed a joint command and set out just before sundown on August 17 with about 200 men. They rode cross country for 26 miles from Smith’s Ford to Brandon’s settlement in Fairforest and then 12 to 14 miles to within a mile of the British camp across the Enoree River. Knowing the countryside through which they passed, the Americans managed to avoid the Tory posts.

After establishing camp the Americans sent out scouts to spy upon the British. They came upon a Tory patrol, and a skirmish occurred. As a result the Americans moved their camp onto a timbered ridge above the ford about ½ mile from the river.

Because of information from local sympathizers concerning the strength of the British post, the Americans decided not to attack, but instead to set a trap for the British that would draw them across the river and into a fortified line of fire.

The fortifications consisted of a breastwork of logs and brushwood, in a semi-circle along a wooded ridge. Shelby’s troops occupied the right portion of the breastworks, Williams’ the center, and Clark’s the left. Twenty horsemen were concealed behind each flank of the breastworks, and 40 men were held in the rear as a reserve.

At the Loyalist camp across the river, Major Innes’s arguments for attach prevailed, even though a 100-man patrol had not returned. Leaving 100 men in camp as a reserve, 300 British troops and Tory militia prepared to cross the river.

The British and Tories remaining at the post decided to retreat to the fort at Ninety Six, 30 miles to the southwest. They received word, however, that the main American force at Camden had been badly defeated and that British reinforcements would be arriving shortly. The Americans received the same news, and hastily set out through the woods with their prisoners, moving in a northwesterly direction. The Americans continues their retreat through the night and into the next morning, traveling sixty miles from Musgrove’s Mill and into the mountains of North Carolina.