"Nobly Did They Die" 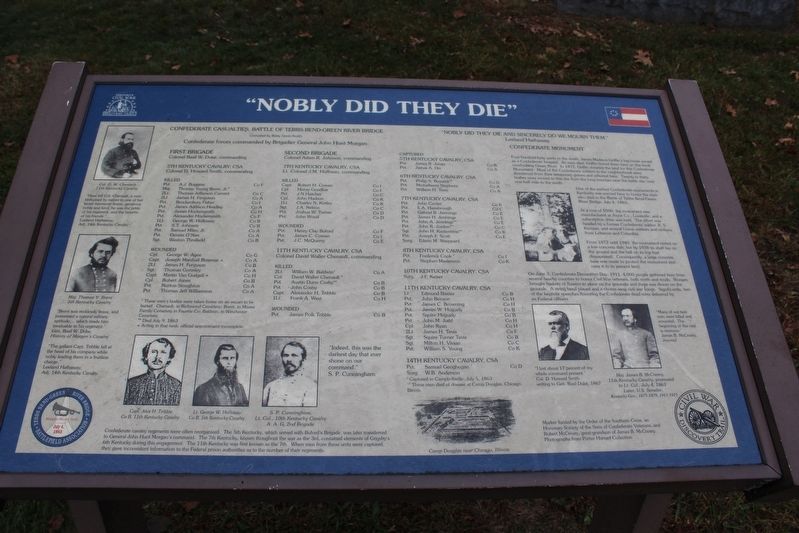 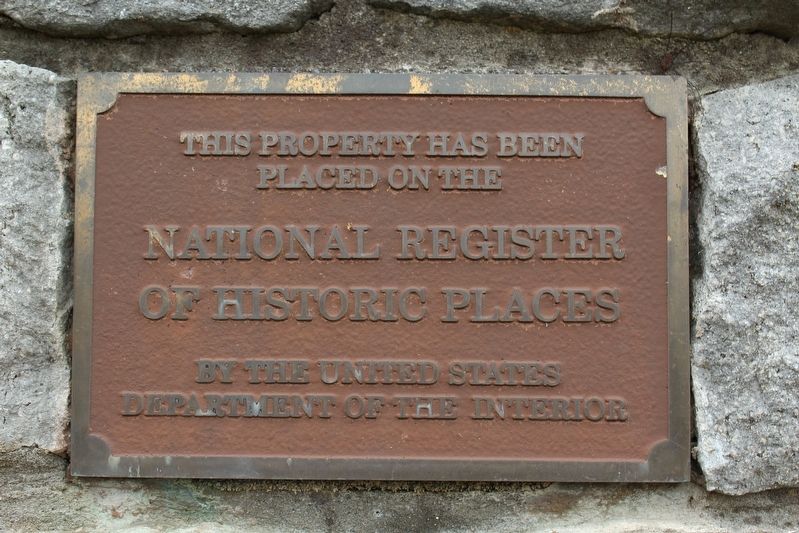 * These men's bodies were taken home on an oxcart to be buried. Chenault, in Richmond Cemetery; Brent, in Moore Family Cemetery in Fayette Co; Baldwin, in Winchester Cemetery.
** Died July 9, 1863
+ Acting in that rank; official appointment incomplete. 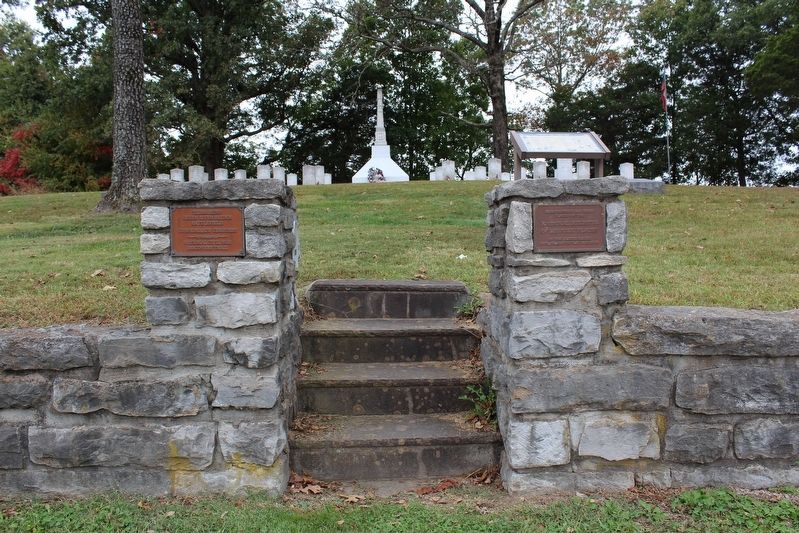 "Nobly did they die and sincerely do we mourn them."
Leeland Hathaway

Four hundred-forty yards to the south, James Madison Griffin's log house served as a Confederate hospital. As men died, Griffin buried them here on this knoll overlooking Green River. In 1872, Griffin donated the land for this Confederate Monument. Most of the Confederate soldiers in the neighborhood were disinterred from their temporary graves and 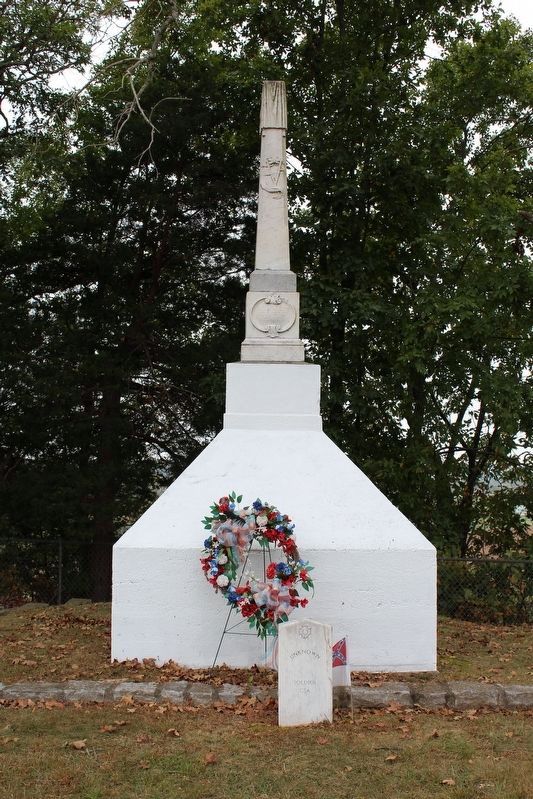 Photographed By Tom Bosse, October 13, 2016
4. Tebbs Bend / Green River Bridge Battlefield Confederate Cemetery Monument
reburied here. Twenty to thirty bodies were moved to this site from the long trenches near the battle site, over one-half mile to the north.

One of the earliest Confederate monuments in Kentucky was erected here to honor the men who died in the Battle of Tebbs Bend - Green River Bridge, July 4, 1863.

At a cost of $500, the monument was manufactured at Joyce Co., Louisville, and a subscription drive was held. The effort was headed by a former Confederate soldier, R. S. Kemper, and several Union soldiers and civilians from Lebanon and Columbia.

From 1872 until 1940, the monument rested on a low concrete slab, but by 1938 its shaft lay on the ground and the ball on its top had disappeared. Consequently, a large concrete base was made to protect the monument and raise it to its present level.

On June 3, 1911, Confederate Decoration Day, 1911, 4,000 people gathered here from several nearby counties to honor Civil War veterans, both north and south. Women brought baskets of flowers to place on the gravesite and there was dinner on the grounds. A string band played and a chorus sang civil war songs. Significantly, two of the keynote speeches honoring the Confederate dead were delivered by ex-Federal officers. 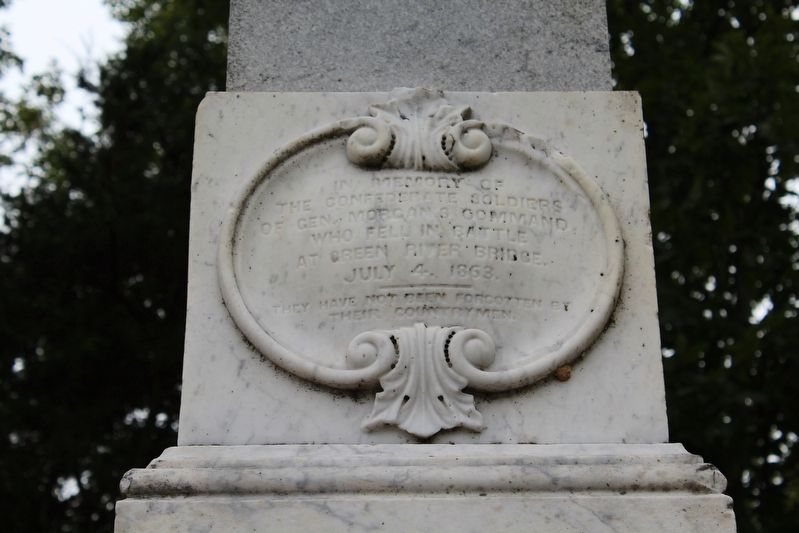 Photographed By Tom Bosse, October 13, 2016
5. Tebbs Bend / Green River Bridge Battlefield Confederate Cemetery Monument
In memory of the Confederate soldiers of Gen. Morgan's command who fell in battle at Green River Bridge, July 4, 1863. They have not been forgotten by the countrymen.
to General John Hunt Morgan's command. The 7th Kentucky, known throughout the war as the 3rd, contained elements of Grigsby's 6th Kentucky during this engagement. The 11th Kentucky was first known as the 7th. When men from these units were captured, they gave inconsistent information to the Federal prison authorities as to the number of their regiments.

Topics and series. This historical marker is listed in this topic list: War, US Civil. In addition, it is included in the John Hunt Morgan Heritage Trail in Kentucky series list. A significant historical date for this entry is July 4, 1863.

Location. 37° 13.817′ N, 85° 20.8′ W. Marker is near Campbellsville, Kentucky, in Taylor County. Marker is on Tebbs Bend Road, 0.2 miles west of New Columbia Road (Kentucky Route 55), on the left when traveling west. Touch for map. Marker is in this post office area: Campbellsville KY 42718, United States of America. Touch for directions. 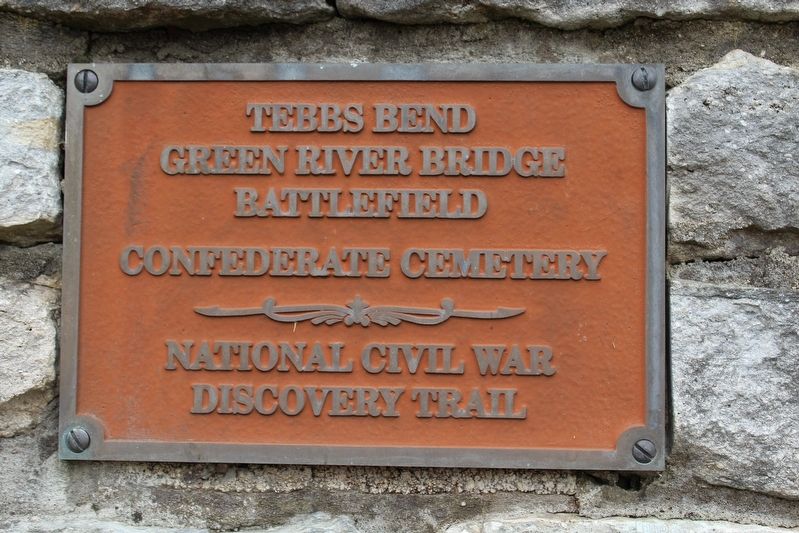