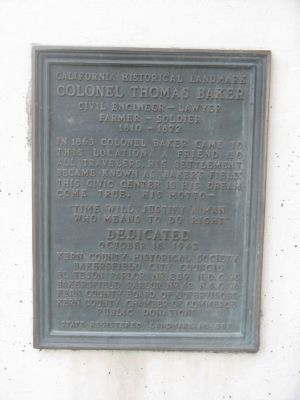 Photographed By Syd Whittle, November 26, 2009
1. Colonel Thomas Baker Marker
Inscription.
Colonel Thomas Baker. . , Colonel Thomas Baker, Civil Engineer – Lawyer , Farmer – Soldier, 1810 – 1872. , In 1863 Colonel Baker came to this location. A friend to all travelers, his settlement became known at “Baker’s Field.” This civic center is his dream come true. His motto , , “Time will justify a man who means to do right” . This historical marker was erected in 1942 by Kern County Historical Society, Bakersfield City Council, El Tejon Parlor No. 239 N.D.G.W., Bakersfied Parlor No.42 N.S.G.W., Kern County Board of Supervisors, Kern County Chamber of Commerce. It is in Bakersfield in Kern County California

Colonel Thomas Baker, Civil Engineer – Lawyer — Farmer – Soldier, 1810 – 1872.
In 1863 Colonel Baker came to this location. A friend to all travelers, his settlement became known at “Baker’s Field.” This civic center is his dream come true. His motto —
“Time will justify a man who means to do right”

Topics and series. This historical marker is listed in this topic list: Settlements & Settlers. In addition, it is included in the California Historical Landmarks, and the Native Sons/Daughters of the Golden West series lists. A significant historical month for this entry is October 1828.

Location. 35° 22.383′ N, 119° 1.159′ W. Marker is in Bakersfield, California, in Kern County. Marker is at the intersection of Truxtun Avenue and Chester Avenue, on the right when traveling east on Truxtun Avenue. Located in front of 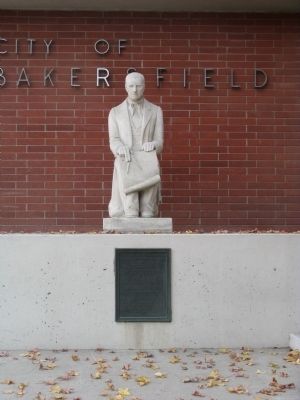 Click or scan to see
this page online
Bakersfield City Hall on the southwest corner. Touch for map. Marker is at or near this postal address: 1501 Truxtun Ave, Bakersfield CA 93301, United States of America. Touch for directions.

Regarding Colonel Thomas Baker. This site was designated California Historical Landmark No. 382 on January 3, 1944.

Related marker. Click here for another marker that is related to this marker. Site of Baker’s Field.

Additional commentary.
1. Clarification of Incorrect Information Regarding Photo #5
• In the 1830's - 1840's there was a trapper in the area by the name of Thomas Fitzgerald. Thomas built a reed & stick home on what was later known as Kern Island. He abandoned it to go look for 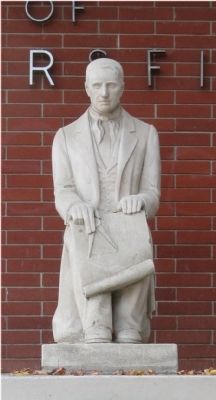 • In the early 1850's a fellow by the name of Christian Bohna moved into that structure, planted crops in the area, and filed for a homestead. His "farm" was completely wiped out in the great flood of 1862.

• Bohna decided to move further north and he sold the reed & stick house and 160 acres of homesteaded land to Col. Thomas Baker for a grand total of $200

So as you can see, Baker did not "build a primitive residence on this site" as the plaque reads. He just moved into the Fitzgerald/Bohna structure, then added on to it later.
— Submitted September 13, 2015. 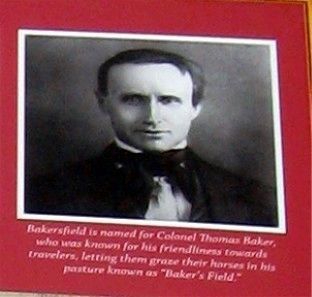 Bakersfield is named for Colonel Thomas Baker, who was known for his friendliness towards travelers, letting them graze their horses in his pasture known as "Baker's Field." 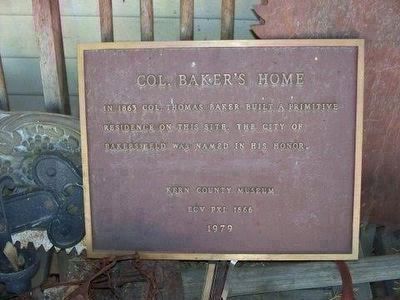 Photographed By Alan Price
5. Col. Thomas Baker's Home Marker
A related marker was put up in 1979 By E Clampus Vitus near the intersection of Truxton and R Streets where the Baker residence once stood, an intersection that no longer exists. The marker was removed and was recently located at Silver City Ghost Town in Bodfish, California leaning against one of the old buildings moved there. Marker reads:

Col. Baker's Home
In 1863 Col. Thomas Baker built a primitive
residence on this site. The City of
Bakersfield was named in his honor.