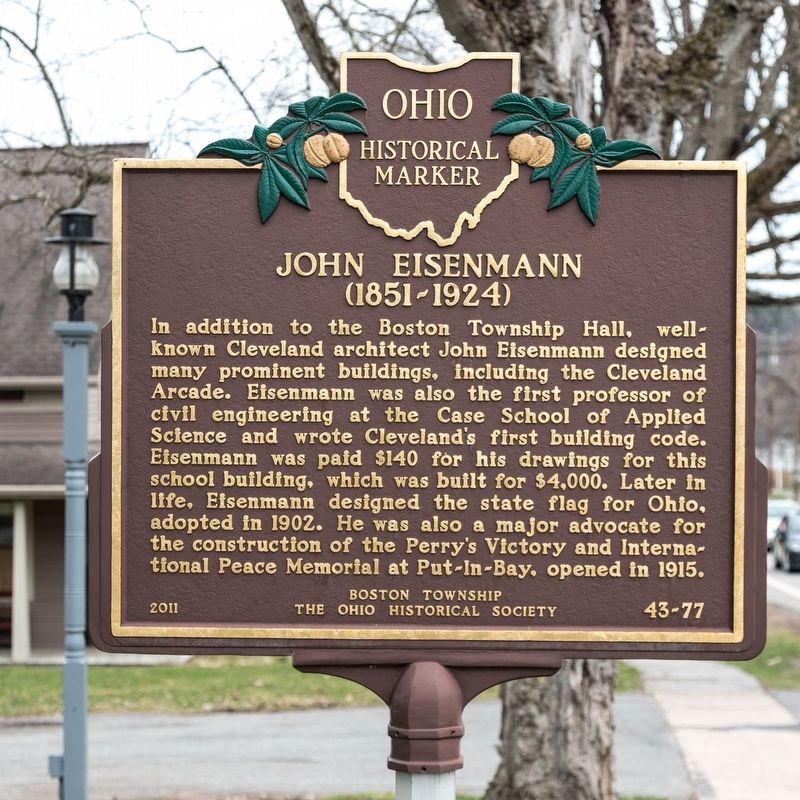 In addition to the Boston Township Hall, well-known Cleveland architect John Eisenmann designed many prominent buildings, including the Cleveland Arcade. Eisenmann was also the first professor of civil engineering at the Case School of Applied Science and wrote Cleveland’s first building code. Eisenmann was paid $140 for his drawings for this school building, which was built for $4,000. Later in life, Eisenmann designed the state flag for Ohio, adopted in 1902. He was also a major advocate for the construction of the Perry’s Victory and International Peace Memorial at Put-In-Bay, opened in 1915. 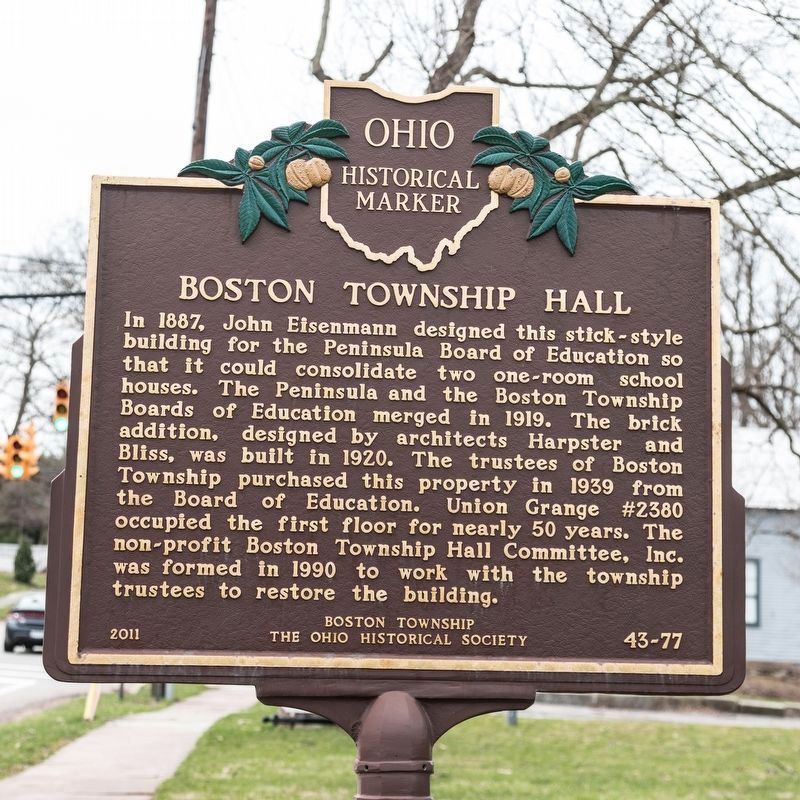 Click or scan to see
this page online
Inc. was formed in 1990 to work with the township trustees to restore the building.

Topics and series. This historical marker is listed in these topic lists: Architecture • Education. In addition, it is included in the Ohio Historical Society / The Ohio History Connection series list. A significant historical year for this entry is 1902. 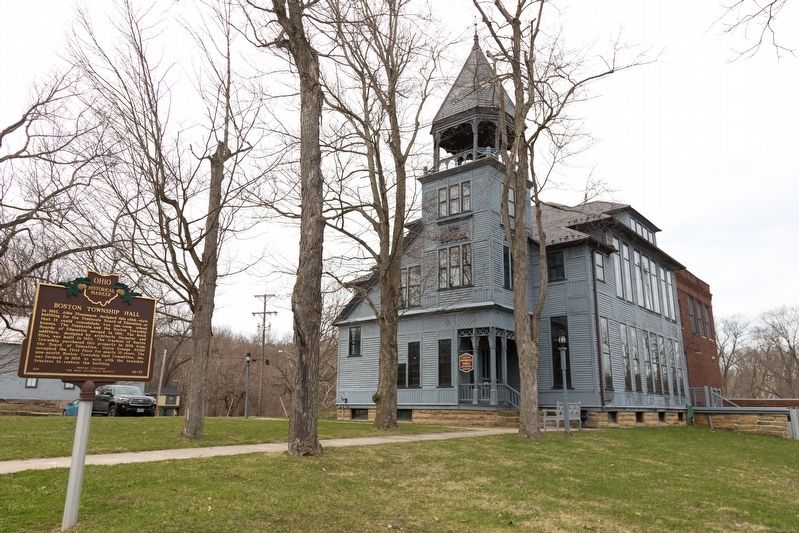 Photographed By J. J. Prats, April 7, 2019
3. Boston Township Hall and Marker
. “The Cleveland Arcade is identified as the first indoor shopping mall in the United States. and was built by Detroit Bridge Co., run by Stephen V. Harkness. It is one of the few remaining arcades of its kind in the United States. Modeled after the Galleria Vittorio Emanuele II located in Milan, the Arcade comprises two nine-story towers with a skylight, 100 feet high, made of 1,800 panes of glass spanning over 300 feet.” (Submitted on May 29, 2019.)

Additional commentary.
1. Peninsula Grange
As a child growing up in Peninsula in the 1950's I was told this building was the "old Grange Hall."
— Submitted July 28, 2020, by Robin Garrett of Marshallton, Pennsylvania. 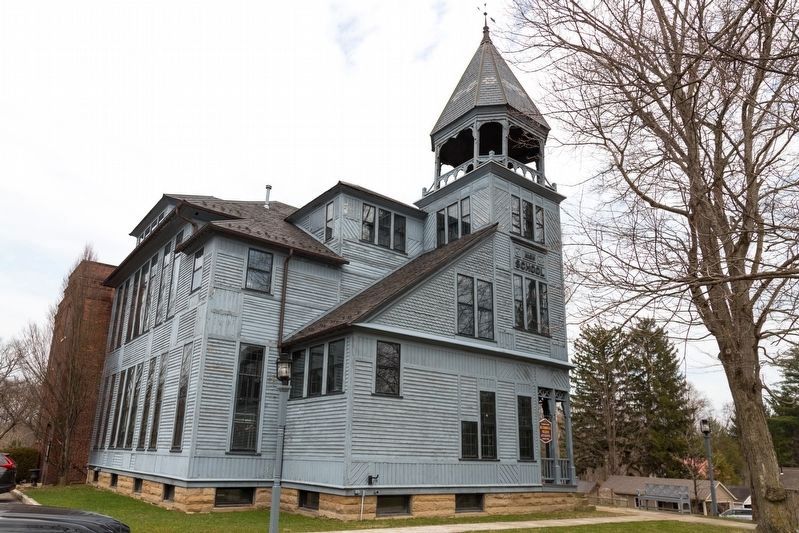 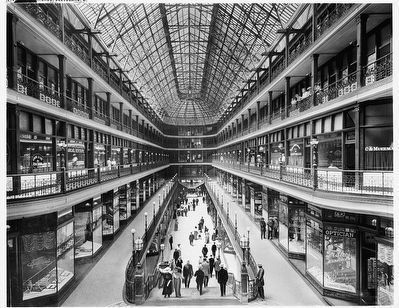 By the Detroit Publishing Co., via the Library of Congress, circa 1915
5. The Cleveland Arcade
401 Euclid Avenue, Cleveland, Ohio. The first indoor shopping mall. 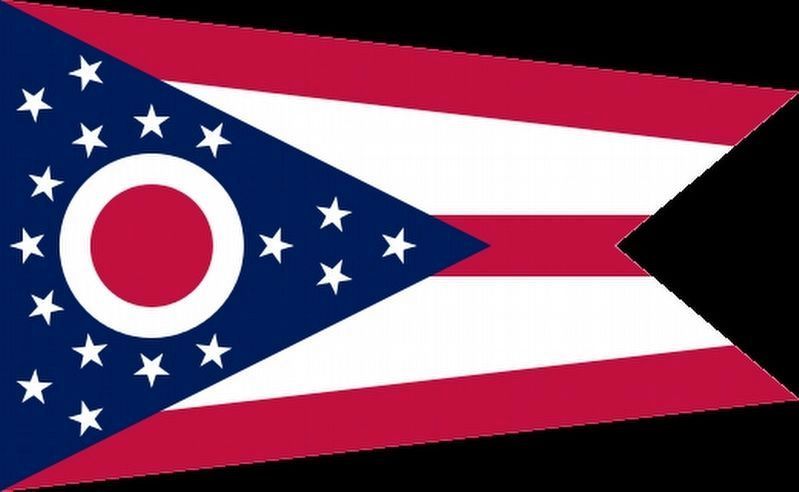 via Wikipedia Commons
6. Ohio State Flag — The Ohio Burgee
Ohio’s swallowtail flag is the only non-rectangular U.S. state flag. Its red, white, and blue elements symbolize the state's natural features and order of admission into the Union. A prominent disc in the flag's triangular canton is suggestive of the state's name. The flag was designed in 1901 by John Eisenmann for the Pan-American Exposition and adopted in 1902.—Wikipedia 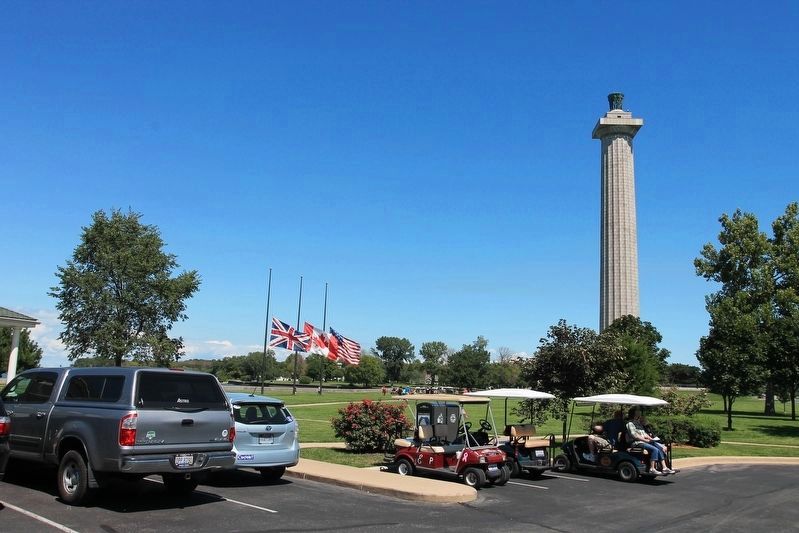