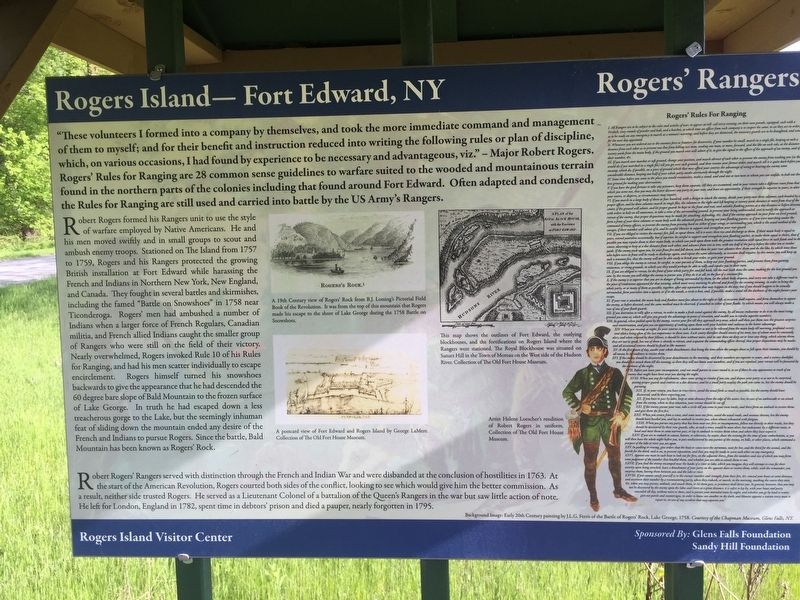 "These volunteers I formed into a company by themselves, and took the more immediate command and management of them to myself; and for their benefit and instruction reduced into writing the following rules or plan of discipline, which, on various occasions, I had found by experience to be necessary and advantageous, viz.” - Major Robert Rogers. Rogers' Rules for Ranging are 28 common sense guidelines to warfare suited to the wooded and mountainous terrain found in the northern parts of the colonies including that found around Fort Edward. Often adapted and condensed, the Rules for Ranging are still used and carried into battle by the US Army's Rangers.

Robert Rogers formed his Rangers unit to use the style of warfare employed by Native Americans. He and his men moved swiftly and in small groups to scout and ambush enemy troops. Stationed on The Island from 1757 to 1759, Rogers and his Rangers protected the growing British installation at Fort Edward while harassing the French and Indians in Northern New York, New England, and Canada. They fought in several battles and skirmishes, including the famed "Battle on Snowshoes”

Click or scan to see
this page online
in 1758 near Ticonderoga. Rogers' men had ambushed a number of Indians when a larger force of French Regulars, Canadian militia, and French allied Indians caught the smaller group of Rangers who were still on the field of their victory Nearly overwhelmed, Rogers invoked Rule 10 of his Rules for Ranging, and had his men scatter individually to escape encirclement. Rogers himself turned his snowshoes backwards to give the appearance that he had descended the 60 degree bare slope of Bald Mountain to the frozen surface of Lake George. In truth he had escaped down a less treacherous gorge to the Lake, but the seemingly inhuman feat of sliding down the mountain ended any desire of the French and Indians to pursue Rogers. Since the battle, Bald Mountain has been known as Rogers' Rock.

Robert Rogers’ Rangers served with distinction through the French and Indian War and were disbanded at the conclusion of hostilities in 1763. At the start of the American Revolution, Rogers courted both sides of the conflict, looking to see which would give him the better commission. As a result, neither side trusted Rogers. He served as a Lieutenant Colonel of a battalion of the Queen's Rangers in the war but saw little action of note. He left for London, England in 1782, spent time in debtors' prison and died a pauper, nearly forgotten in 1795

Rogers' Rules For Ranging
I. 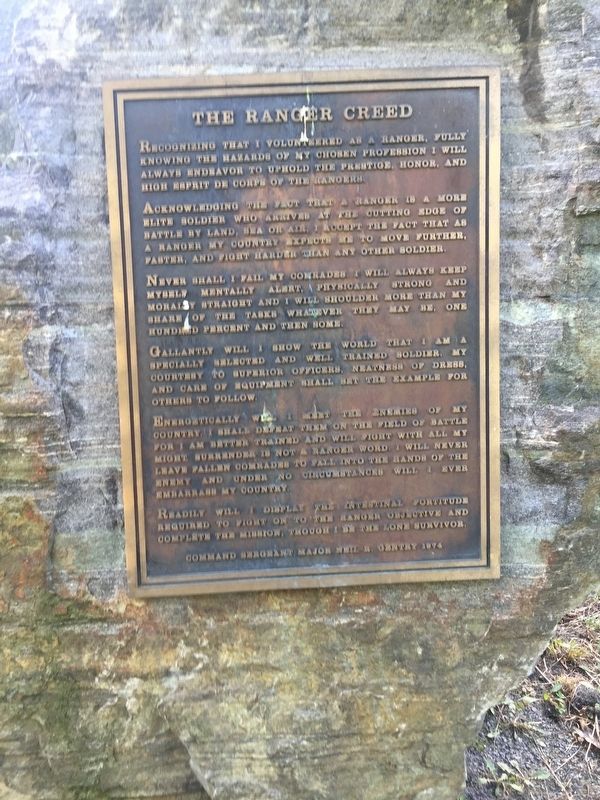 Photographed By Steve Stoessel, May 18, 2019
3. Rogers rules for Rangers
All Rangers are to be subject to the rules and articles of war, to appear as roll call every evening, on their own parade, equipped, each with Firelock, sixty rounds of powder and ball, and a hatchet, at which time an officer from each company is to inspect the same, to see they are in order as to be ready on any emergency to march at a minute's warning; and before they are dismissed, the necessary guards are to be draughted and scouts for the next day appointed.
II. Whenever you are ordered out to the enemies forts or frontiers for discoveries, if your number be small, march in a single file, keeping at such a distance from each other as to prevent one shot from killing two men, sending one man, or more forward, and the like on each side, as the distance of twenty yards from the main body, if the ground you march over will admit of it, to give the signal to the officer of the approach of an enemy, and their number, etc.
III. If you march over marshes or soft ground, change your position, and march abreast each other to prevent the enemy from tracking you (as they would do if you marched in a single file) till you get such ground as will admit of it, and then resume your former order, and march till it is quite dark before you encamp, which do, if possible, on a piece of ground which that may afford your centuries the advantage of seeing or bearing the enemy some considerable 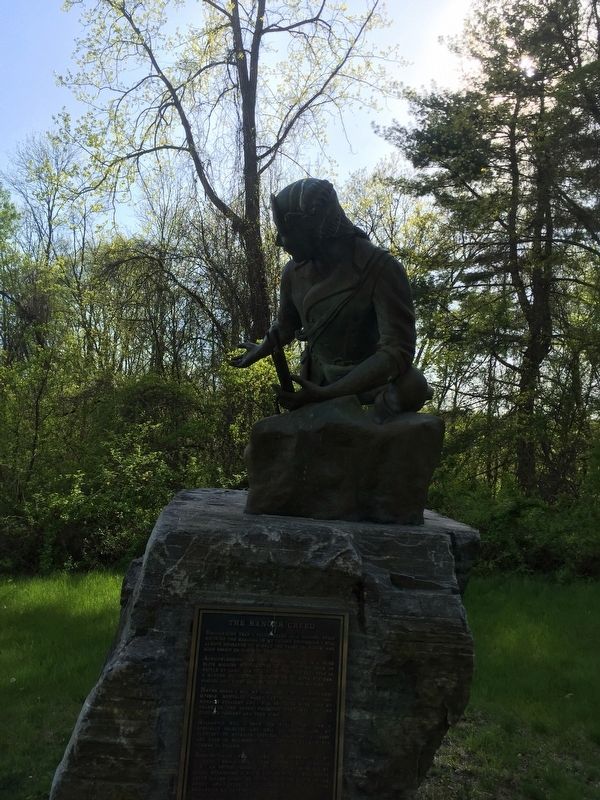 Photographed By Steve Stoessel, May 18, 2019
4. Rogers Island -- Fort Edward, NY Marker
distance, keeping one half of your whole party awake alternately through the night.
IV. Some time before you come to the place you would reconnoitre, make a stand, and send one or two men in whom you can confide, to look out the ground for making your observations.
V. If you have the good fortune to take any prisoners, keep them separate, till they are examined, and on your return take a different route from that which you went out, that you may the better discover any party in your rear, and have an opportunity, if their strength be superior to yours, to alternate your course, or disperse, as circumstances may require.
VI. If you march in a large body of three on four hundred with a design to attack the enemy, divide your party into three columns, each headed by an proper officer, and let those columns march single files, the columns to the left and right keeping as twenty yards distance or more from that of the center, if the grounds will admit, and let proper guards be he kept in the front and rear, and suitable flanking parties at a due distance as before directed with orders to halt at all eminences, so take a view of the surrounding ground to prevent your being ambuscaded, and to notify the approach or retreat of the enemy that proper dispositions may be made for attacking, defending, etc. And if the enemy approach in your front on level ground, form a 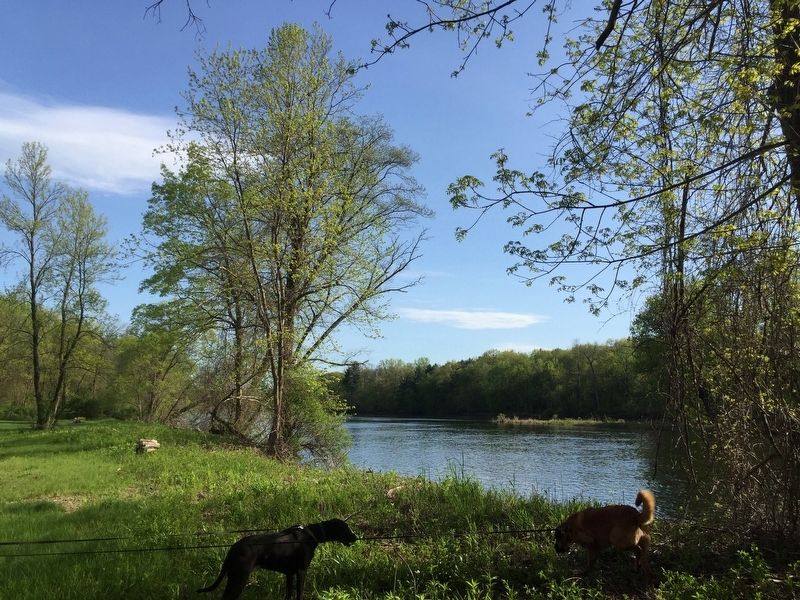 Topics. This historical marker is listed in these topic lists: War, French and Indian • War, US Revolutionary. A significant historical year for this entry is 1757.