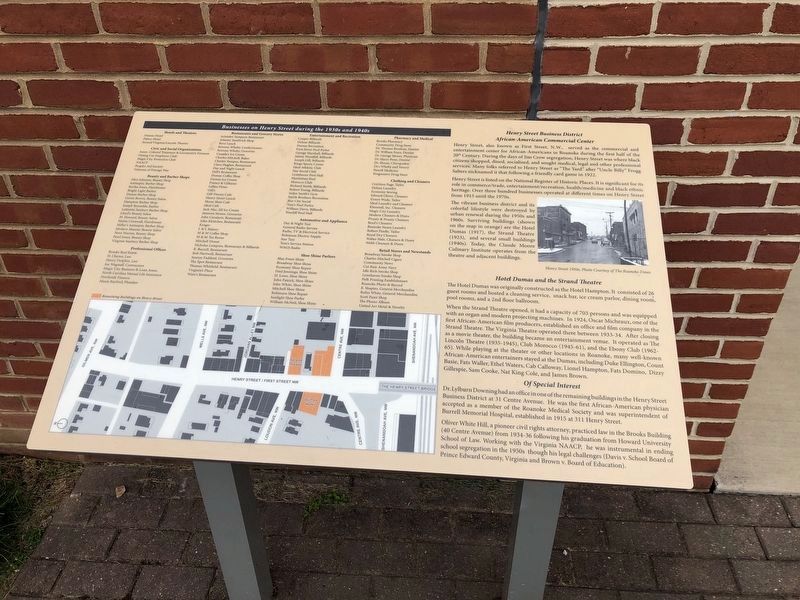 African-American Commercial Center
Henry Street, also known as First Street, N.W., served as the commercial and entertainment center for African-Americans in Roanoke during the first half of the 20th Century. During the days of Jim Crow segregation, Henry Street was where black citizens shopped, dined, socialized, and sought medical, legal and other professional services. Many folks referred to Henry Street as "The Yard" after "Uncle Billy" Frogg Salters nicknamed it that following a friendly card game in 1922.

Henry Street is listed on the National Register of Historic Places. It is significant for its role in commerce/trade, entertainment/recreation, health/medicine and black ethnic heritage. Over three hundred businesses operated at different times on Henry Street from 1915 until the 1970s.

The vibrant business district and its colorful lifestyle were destroyed by urban renewal during the 1950s and 1960s. Surviving buildings (shown on the map in orange) are the Hotel Dumas (1917), the Strand Theatre (1923), and several small buildings (1940s). Today, the Claude Moore Culinary Institute operates from the theatre 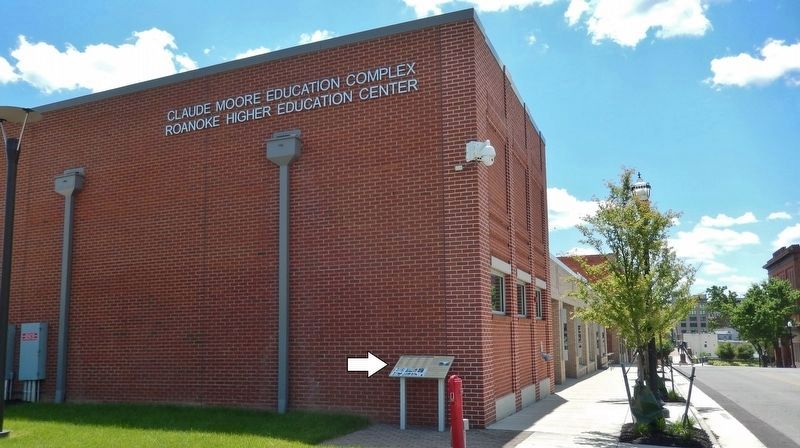 Click or scan to see
this page online
and adjacent buildings.

Hotel Dumas and the Strand Theatre
The Hotel Dumas was originally constructed as the Hotel Hampton. It consisted of 26 guest rooms and hosted a cleaning service, snack bar, ice cream parlor, dining room, pool rooms, and a 2nd floor ballroom.

When the Strand Theatre opened, it had a capacity of 703 persons and was equipped with an organ and modern projecting machines. In 1924, Oscar Micheaux, one of the first African-American film producers, established an office and film company in the Strand Theatre. The Virginia Theatre operated there between 1933-34. After closing as a movie theater, the building became an entertainment venue. It operated as The Lincoln Theatre (1935-1945), Club Morocco (1945-61), and the Ebony Club (1962-65). While playing at the theater or other locations in Roanoke, many well-known African-American entertainers stayed at the Dumas, including Duke Ellington, Count Basie, Fats Waller, Ethel Waters, Cab Calloway, Lionel Hampton, Fats Domino, Dizzy Gillespie, Sam Cooke, Nat King Cole, and James Brown.

Of Special Interest
Dr. Lylburn Downing had an office in one of the remaining buildings in the Henry Street Business District at 31 Centre Avenue. He was the first African-American physician accepted as a member of the Roanoke Medical Society and was superintendent of Burrell Memorial Hospital, 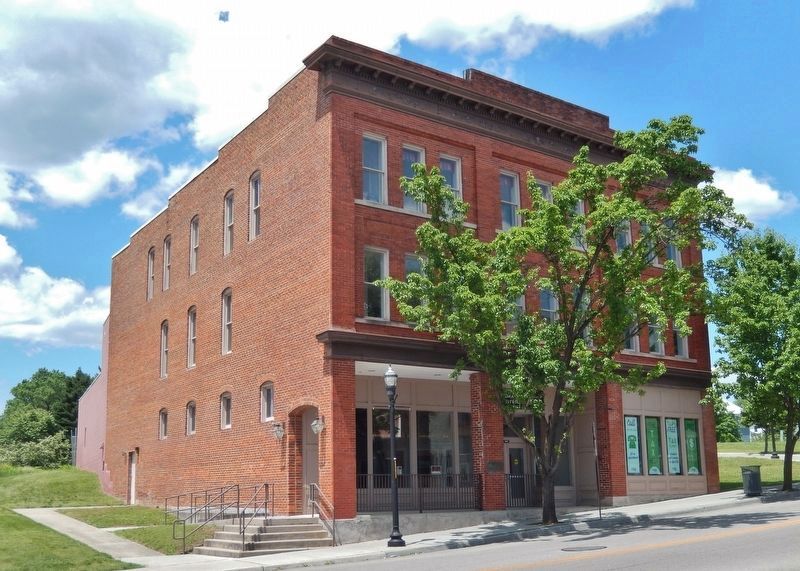 Oliver White Hill, a pioneer civil rights attorney, practiced law in the Brooks Building (40 Centre Avenue) from 1934-36 following his graduation from Howard University School of Law. Working with the Virginia NAACP, he was instrumental in ending school segregation in the 1950s through his legal challenges (Davis v. School Board of Prince Edward County, Virginia and Brown v. Board of Education). 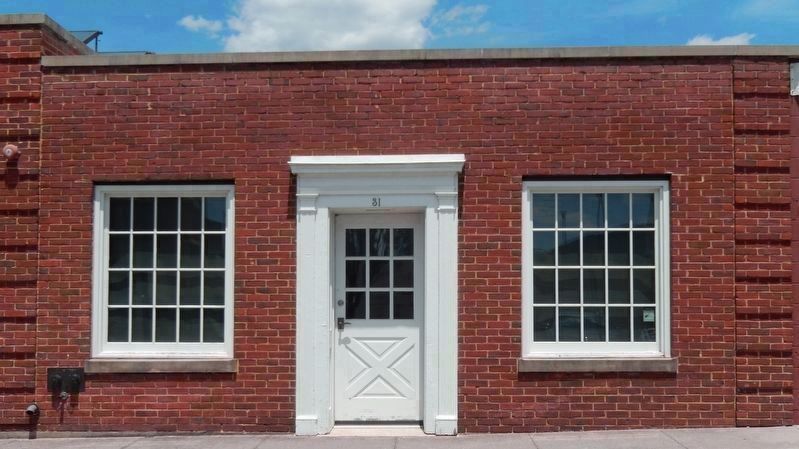 Topics and series. This historical marker is listed in these topic lists: African Americans • Civil Rights • Entertainment • Industry & Commerce. In addition, it is included in the Historically Black Colleges and Universities series list.

Location. 37° 16.503′ N, 79° 56.532′ W. Marker is in Roanoke, Virginia. Marker is on Henry Street Northwest north of Loudon Avenue Northwest, on the right when traveling north. Marker is located at the northwest corner of the Claude Moore Education Complex building. Touch for map. Marker is at or near this postal address: 109 North Henry Street, Roanoke VA 24016, United States of America. Touch for directions.

Related markers. Click here for a list of markers that are related to this marker. Henry Street Business District

Also see . . .
1. Claude Moore Education Complex • Building History. The Complex is housed in downtown Roanoke’s old Ebony Club, which was built circa 1920 as the Strand Theater. It was there, in the early- to mid-1920s, that one of the first African-American filmmakers, Oscar Micheaux, had an office for his production company, the Oscar Micheaux Film Corporation. After producing several films in Roanoke, Micheaux moved to New York to continue producing, and the Strand Theater took the name “The Lincoln Theater.” The theater eventually became the Morocco Club and the Ebony Club, which were African-American dance clubs serving the surrounding Gainsboro neighborhood. The building has also housed a doctor’s office, record shop, barbershop, and shoe shine business that historically served the surrounding African-American community. (Submitted on May 30, 2019, by Cosmos Mariner of Cape Canaveral, Florida.)