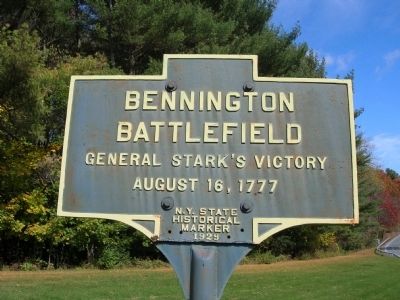 Topics and series. This historical marker is listed in these topic lists: Colonial Era • Patriots & Patriotism • War, US Revolutionary. In addition, it is included in the National Historic Landmarks series list.

Location. 42° 56.032′ N, 73° 18.287′ W. Marker is in Walloomsac, New York, in Rensselaer County. Marker is on New York State Route 67, on the right when traveling west. Marker is beside the entrance to the Bennington Battlefield State Historic Site. Touch for map. Marker is in this post office area: Hoosick Falls NY 12090, United States of America. Touch for directions. 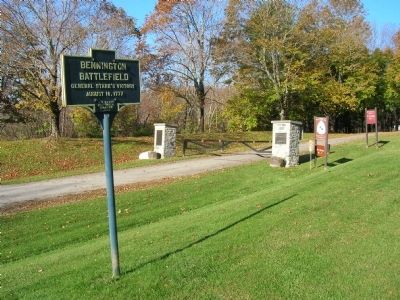 More about this marker. Bennington Battlefield State Historic Site received National Historic Landmark designation on January 20, 1961. Additionally, the site was placed on the National Register of Historic Places in 1966.

Regarding Bennington Battlefield. The Battle of Bennington was a battle of the American Revolutionary War, taking place on August 16, 1777, in Walloomsac, New York, about 10 miles away from its namesake Bennington, Vermont.

In 1777 the over-all British strategy had two major objectives: (1) to split New England from the rest of the American states by a drive from Canada down the Hudson to Albany that would link up with another British force advancing north from New York City; and (2) to seize Philadelphia, seat of the Revolutionary government. The campaign in upper New York began in June 1777 with a two-pronged British drive from Canada

The main British expedition from Canada was led by General John Burgoyne. The goal was to seize the Lake Champlain and Hudson River corridor, effectively isolating New England from the rest of the American colonies. Burgoyne's invasion had two components: he would lead about 10,000 men along Lake Champlain 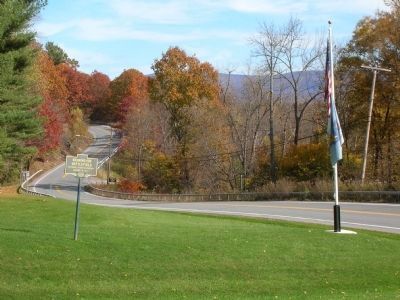 Photographed By Howard C. Ohlhous, October 17, 2008
3. Bennington Battlefield Marker - Beside Route 67
View is to the east, looking toward Vermont.
towards Albany, New York, while a second column of about 2,000 men, led by Barry St. Leger, would move down the Mohawk River valley and link up with Burgoyne in Albany, New York. Burgoyne had already taken Fort Ticonderoga and advanced southward, though delayed by American rearguard actions at Hubbardton.

185 miles from his Canadian base camp, Burgoyne camped near Fort Edward, New York, desperately in need of supplies and horses for his campaign toward Albany. Consequently, he ordered a force numbering as many as 1,500 men including Brunswick dragoons in search of horses, Hessian artillery and other German detachments, French Canadians, Native Americans, Loyalists and British marksmen, to seize supplies stored at Bennington, Vermont. General Burgoyne's decision was based on a number of false assumptions. He was misled by assurances of local Tory support and strength and he had no respect for the colonial army, unlike his fellow officers who had actually fought against them.

The foraging unit, led by Lieutenant-Colonel Friedrich Baum of the Brunswick dragoons, set out from camp for Bennington on August 11, inspired by Burgoyne's optimism. The heavily laden German troops, slow moving under optimum conditions, plodded on towards Bennington. Alarmed at the pace and probable success of Burgoyne’s advancing army the newly formed Republic of Vermont appealed to neighboring 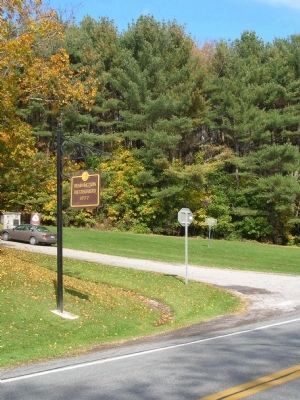 Photographed By Howard C. Ohlhous, October 17, 2008
4. Bennington Battlefield Marker
New Hampshire for assistance against the British. The Colonial forces had chosen as their leader retired Continental Army Colonel John Stark, who had fought at Bunker Hill and under George Washington at Trenton and Princeton. Given the rank of Brigadier General, Stark accepted the challenge under the independent authority granted by New Hampshire rather than under Continental command. Under Stark’s command was the entire Bennington force, consisting of approximately 2,000 Vermont, New Hampshire and Berkshire County (Massachusetts) volunteers, most of whom were untrained.

Apprised of the enemy raid, Stark decided to head them off rather than defend the supply depot at the Bennington site. Therefore, it was approximately five miles northwest of Bennington, near Walloomsac Heights, in New York State, that the battle actually took place. On August 14th, Baum sighted Stark’s forces at San Coick Mill and pursued them to within four miles of Bennington. Thereafter, Baum took up position on a small hill overlooking the Walloomsac River and dispersed his troops to hold the bridge which carried the road across the river to Bennington. Baum was outnumbered two to one but expected reinforcements led by Breymann to arrive. He was still contemptuous of the American troops, thinking that they would retreat before him. Rain staved off the battle, demoralizing and discomforting the troops 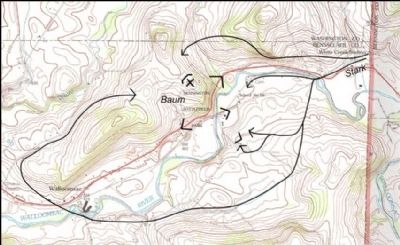 Photographed By National Park Service
5. The British Position and the American Attack
The lines with arrows represent Stark's troop movements. The "v" marks indicate the locations of Baum's forces.
on both sides, and slowing the arrival of Baum's reinforcements. Although the odds where in the colonial's favor the rain prevented them from taking advantage of the situation. By Noon on the 16th the weather cleared and Stark set his plans in motion.

After assessing the British positions Stark sent detachments under Colonel Moses Nichols to circle Baum’s left, under Colonel Samuel Herrick to circle the right, and under Colonels David Hobart and Thomas Stickney to the south. Stark, with the remaining men, made the principal frontal attack. The fighting began at three o’clock on the afternoon of August 16th. Popular folklore has Stark uttering the immortal words, “There are the Red Coats; they will be ours or tonight Molly Stark sleeps a widow!” The battle was won by a fortuitous blend of British errors and Colonial sagacity in capitalizing on them. In the first engagement, before either side had received its reinforcements, Baum obstinately retained his troops in their dispersed and unstrategic position, making communication impossible. The colonial plan, devised by Stark and Seth Warner who had arrived in advance of his troops, took advantage of this error. They intended to surround Baum, enveloping both flanks. Men also infiltrated the German ranks posing as Tory sympathizers and duped Baum by counting on his naive belief in the non-existent Tory 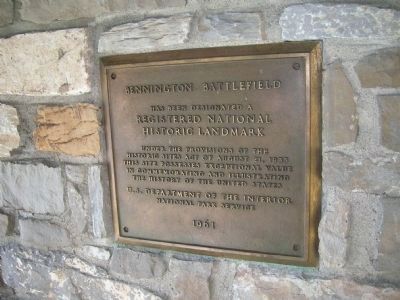 
Bennington Battlefield
Has Been Designated A
Registered National
Historic Landmark
Under The Provisions Of The
Historic Sites Act of August 21, 1935
This Site Possesses Exceptional Value
In Commemorating and Illustrating
The History of the United States
U.S. Department Of The Interior
National Park Service
1961
support. Attacked on all sides, the Native Americans fled and the Loyalists scattered, Baum's clusters of troops fought until their ammunition was depleted. Then, leading his men in a saber charge, Baum himself was mortally wounded. The first shots had been fired by Nichols’ battalion and by five o’clock the British troops were retreating in disorder.

The colonial troops had suffered few loses but were greatly dispersed, looting, disarming and guarding prisoners and pursuing the retreating survivors. The first engagement was a distinct American victory. The end of the day found the British foraging force virtually annihilated and Burgoyne’s army in more a dangerous position than before. The loss had cost Burgoyne approximately 10% of his force, and he still needed supplies. Total German & British losses at Bennington were recorded at 207 dead and 700 captured; American losses included 40 Americans dead and 30 wounded. Stark, Warner and their untrained militia had defeated an enemy that was poorly integrated, but comprised of some of Europe’s best regular soldiers. The defeat also greatly discouraged Burgoyne's uneasy Indian allies, gave a psychological boost to the Colonial forces and encouraged militia enlistment in the American army. The stage had been set for the Battle(s) of Saratoga.