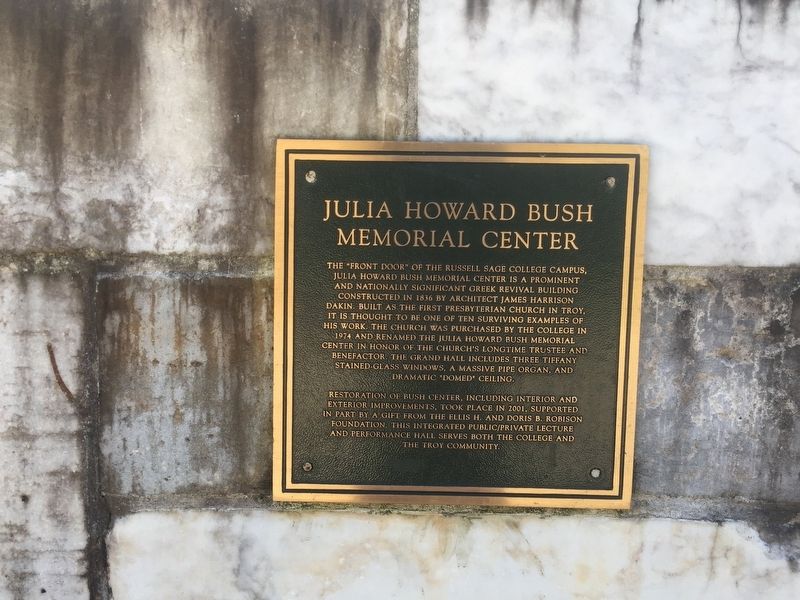 The "Front Door” of the Russell Sage College Campus, Julia Howard Bush Memorial Center is a prominent and nationally significant Greek Revival building constructed in 1836 by architect James Harrison Dakin. Built as the First Presbyterian Church in Troy, it is thought to be one of ten surviving examples of his work. The church was purchased by the college in 1974 and renamed the Julia Howard Bush Memorial Center in honor of the church's longtime trustee and benefactor. The grand hall includes three Tiffany stained-glass windows, a massive pipe organ, and dramatic "domed” ceiling.

Restoration of Bush Center, including interior and exterior improvements, took place in 2001, supported in part by a gift from the Ellis H. and Doris B. Robison Foundation. This integrated public/private lecture and performance hall serves both the college and the Troy community.

Topics. This historical marker is listed in these topic lists: Architecture • Education. A significant historical year for this entry is 1836.

Click or scan to see
this page online
County. Marker is on Congress Street near First Street, on the left when traveling west. Touch for map. Marker is in this post office area: Troy NY 12180, United States of America. Touch for directions.