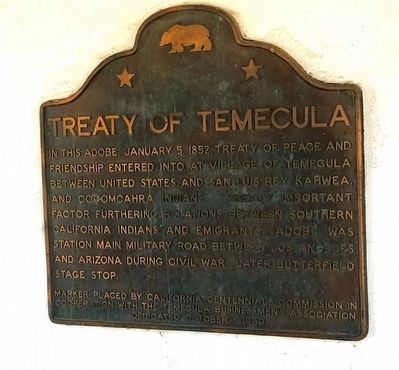 Photographed By Jerry Klinger, June 13, 2019
1. Treaty of Temecula Marker
Inscription.
Treaty of Temecula. . , In this adobe, January 5, 1852, Treaty of Peace and Friendship entered into at village of Temecula between United States and San Luis Rey Kahwea, and Cocomcahra Indians. Treaty important factor furthering relations between southern California Indians and emigrants. Adobe was station main military road between Los Angeles and Arizona during Civil War. Later Butterfield stage stop. . This historical marker was erected in 1950 by California Centennials Commission in cooperation with the Temecula Businessmen's Association. It is in Temecula in Riverside County California

Erected 1950 by California Centennials Commission in cooperation with the Temecula Businessmen's Association.

Topics. This historical marker is listed in this topic list: Native Americans. A significant historical date for this entry is January 5, 1852.

Location. 33° 28.756′ N, 117° 5.863′ W. Marker is in Temecula, California, in Riverside County. Marker can be reached from Temecula Parkway east of Redhawk Parkway. Marker is located at Vail Headquarters. Touch for map. Marker is at or near this postal address: 32115 Temecula Parkway, Temecula CA 92592, United States of America. Touch for directions.

Other nearby markers. At least 8 other markers are within 8 miles of this marker, measured as the crow flies. The Wolf Store (a few steps from this marker); Patricia H. Birdsall (approx. 1.8 miles away); The Great Oak (approx. 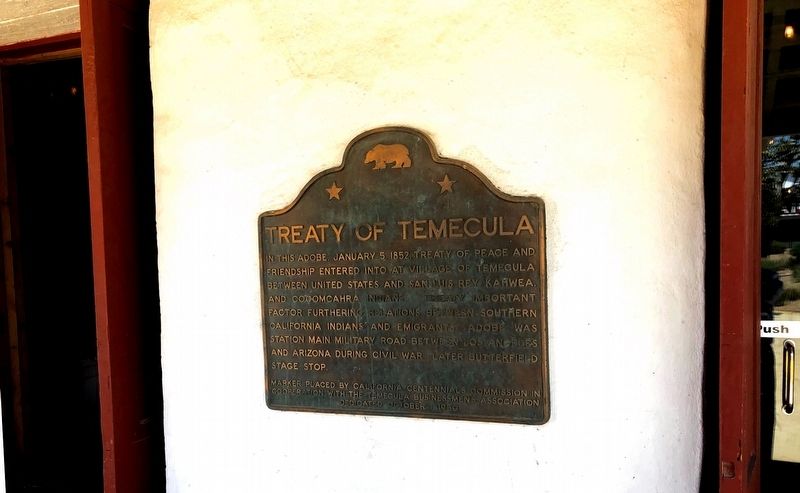 More about this marker. The marker is on the wall of the historic Wolfe Store. In 1950, the bronze marker may have been attached to a large marker rock or cement display.

Regarding Treaty of Temecula. The Treaty of Temecula is but one of 18 unratified treaties with California tribes that were submitted to the U.S. Senate on June 1, 1852, by President Millard Fillmore. Unbeknownst to the tribal signatories, the Senate rejected the treaties and ordered them to be held in secrecy for over fifty years.

In the meantime, the tribes were left vulnerable to abuse and subjugation at the hands of white settlers and the policies of state lawmakers, leading to an ethnic cleansing in which the Indian population in California plunged from perhaps 150,000 to 30,000 between 1846 and 1870. “By displaying Treaty K, the museum recognizes not only the treaties that were broken, but also the power imbalance that existed to allow treaties to be dismissed and their memory to be locked away 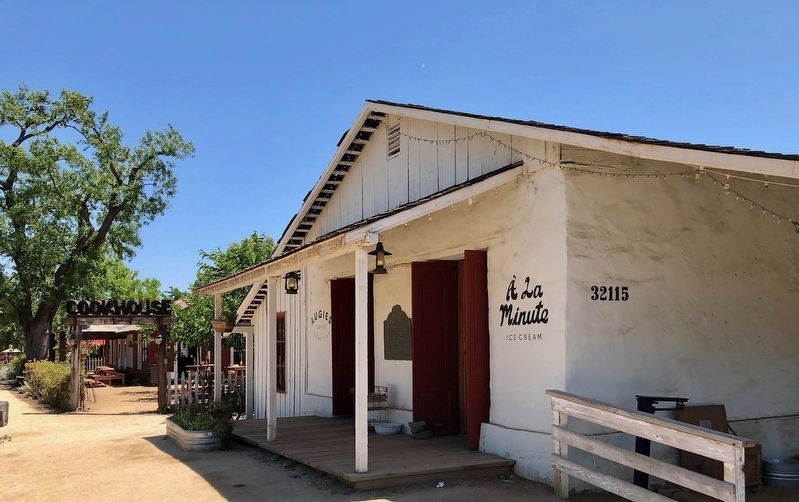 Marker located on the exterior entrance of the historic Wolf Adobe in Temecula. Louis Wolf was the first Jewish settler in Temecula, a major business developer, and promoter. Wolf was euphemistically known as "The King of Temecula". He married Ramona Place. She became the lead character in the famed romance novel that raised historical awareness of the Native American experience, racial prejudice, and Native American land confiscation. The book was written by Helen Hunt Jackson.

Also see . . .
1. Unratified Treaty at the Village of Temecula in California to Go On Display at the National Museum o. Smithsonian Institution PDF (Submitted on June 15, 2019, by Jerry Klinger of Boynton Beach, Florida.)

3. The Eviction of the Temecula Indians. Perchanga Band of Indians website entry:
Excerpt:

On September 20, 1875, under orders from the District Court of San Francisco, Sheriff Nicholas Hunsaker of San Diego and approximately twenty armed men evicted the Temecula Indians from their traditional village. The eviction took place over three days.

The posse led by Sheriff Hunsaker, who was paid $300 for the job, included the owners of the ranch, as well as local landowners Louis Wolf and José Gonzales. The men drove wagons to the Indians’ homes and loaded their belongings in them. The Indians did not fight back because the posse members told them that anyone who resisted would be shot.