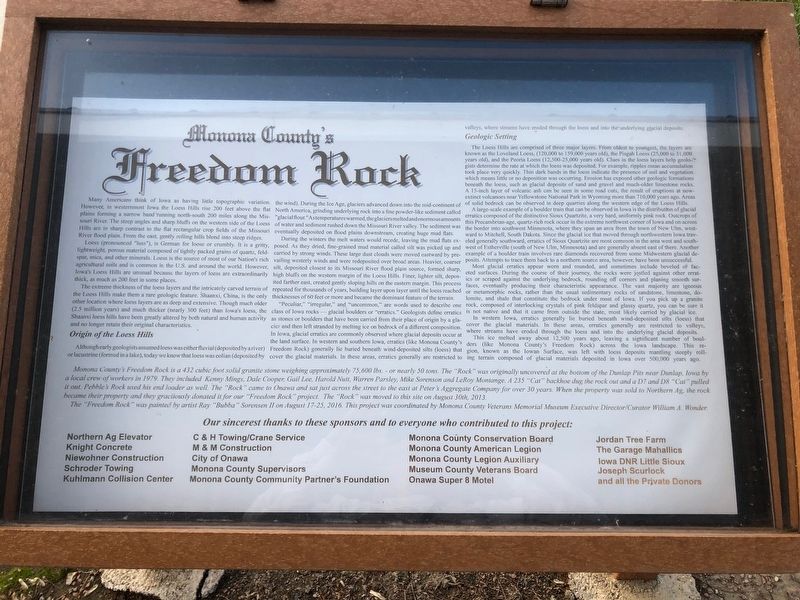 Monona County's Freedom Rock
Many Americans think of Iowa as having little topographic variation. However, in westernmost Iowa the Loess Hills rise 200 feet above the flat plains forming a narrow band running north-south 200 miles along the Missouri River. The steep angles and sharp bluffs on the western side of the Loess Hills are in sharp contrast to the flat rectangular crop fields of the Missouri River flood plain. From the east, gently rolling hills blend into steep ridges.

Loess (pronounced "luss"), is German for loose or crumbly. It is a gritty, lightweight, porous materiel composed of tightly packed grains of quartz, feldspar, mica and other minerals. Loess is the source of most of our Nation's rich agricultural soils and is common in the U.S. and around the world. However Iowa's Loess Hills are unusual because the layers of Loess are extraordinarily thick, as much as 200 feet in some places.

The extreme thickness of the loess layers and the intricately carved terrain of the Loess Hills make them a rare geologic feature. Shaanxi, China is the only other location where loess layers are as deep 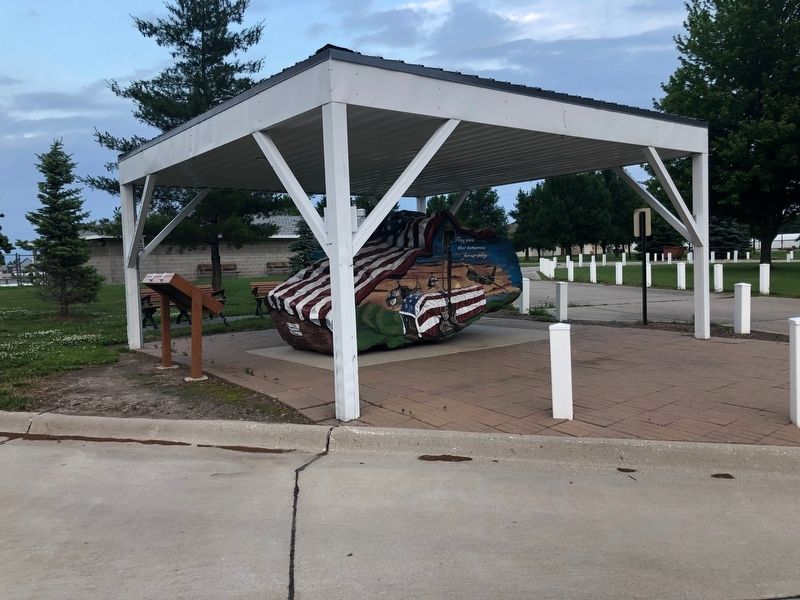 Click or scan to see
this page online
and extensive. Though much older (2.5 million years) and much thicker (nearly 300 feet) than Iowa's loess, the Shaanxi loess hills have been greatly altered by both natural and human activity and no longer retain their original characteristics.

Original of the Loess Hills
Although early geologists assumed loess was either Fluvial (deposited by a river) or Lacustrine (formed in a lake), today we know that loess was colian (deposited by the wind). During the Ice Age, glaciers advanced down into the mid-continent of North America, grinding underlying rock into a fine powder-like sediment called "glacialflour." As temperatures warmed, the glaciers melted and enormous amounts of water and sediment rushed down the Missouri River valley. The sediment was eventually deposited on flood plains downstream, creating huge mud flats. 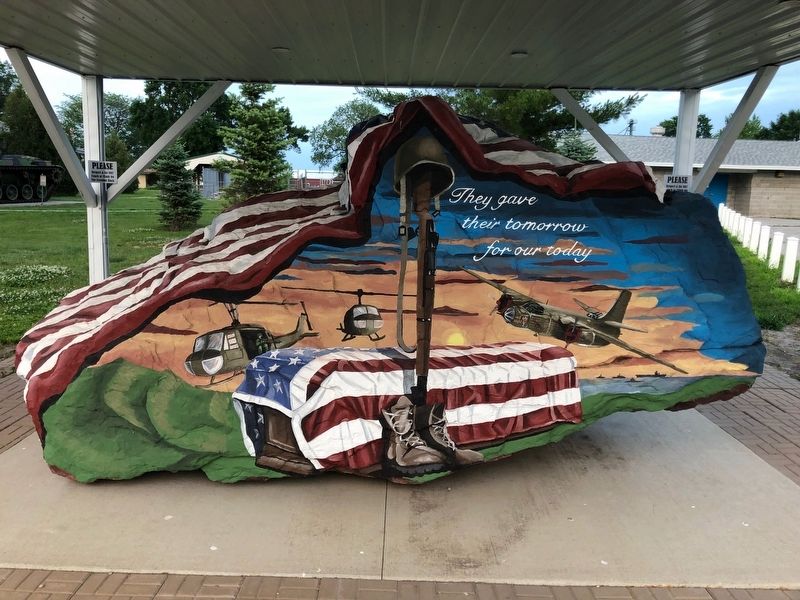 Photographed By Ruth VanSteenwyk, June 17, 2019
3. Onawa Freedom Rock Veterans Memorial
This process repeated for thousands of years, building layer upon layer until the loess reached thickness of 60 feet or more and became the dominant feature of the terrain.

"Peculiar," "irregular," and "uncommon," are words used to describe one class of Iowa rocks - glacial boulders or "erratics." Geologists define erratics as stones or boulders that have been carried from their place of origin by a glacier and then left stranded by melting ice on bedrock of a different composition. In Iowa, glacial erratics are commonly observed where glacial deposits occur at the land surface. In western and southern Iowa, erratics (like Monona County's Freedom Rock) generally lie buried beneath wind-deposited silts (loess) that cover the glacial materials. In these areas, erratics generally are restricted to valleys, where streams have eroded through the loess and into the underlying glacial deposits.

Geologic Setting
The Loess Hills are comprised of three major layers. From oldest to youngest, the layers are known as the Loveland Loess, (120,000 to 159,000 years old), the Pisgah Loess (25,000 to 31,000 years old), and the Peoria Loess (12,500 to 25,000 years old). Clues in the loess layers help geologists determine the rate at which the loess was deposited. For example, ripples mean accumulation took place very quickly. Thin dark bands in the loess indicated 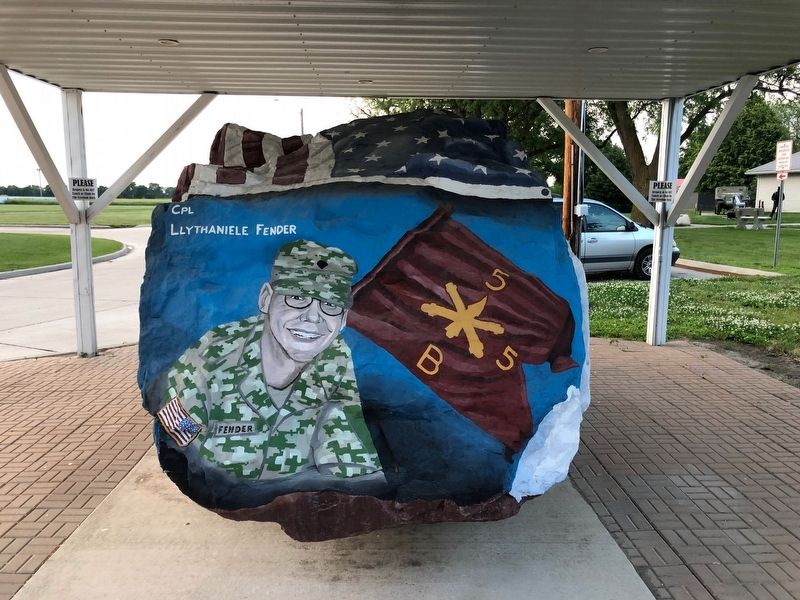 Photographed By Ruth VanSteenwyk, June 17, 2019
4. Onawa Freedom Rock Veterans Memorial
the presence of soil and vegetation which means little or no deposition was occurring. Erosion has exposed other geologic formations beneath the loess, such as glacial deposits of sand and gravel and much-older limestone rocks. A 15-inch layer of volcanic ash can be seen in some roads cuts, the result of eruptions at now-extinct volcanoes near Yellowstone National Park in Wyoming more than 710,000 years ago. Areas of solid bedrock can be observed I deep quarries along the western edge of the Loess Hills.

A large-scale example of a boulder train that can be observed in Iowa is the distribution of glacial erratics composed of the distinctive Sioux Quartzite, a very hard, uniformly pink rock. Outcrops of this Precambrian-age, quartz-rich rock occur in the extreme northwest corner of Iowa and on across the border into southwest Minnesota, where thy span an area from the town of New Ulm, westward to Mitchell, South Dakota. Since the glacial ice that moved through northwestern Iowa traveled generally southward, erratics of Sioux Quartzite are most common in the area east and southwest of Estherville (south of New Ulm, Minnesota) and are generally absent east of there. Another example of a boulder train involves rare diamonds recovered from some Midwestern glacial deposits. Attempts to trace them back to a northern source area, hover ever, have been unsuccessful. 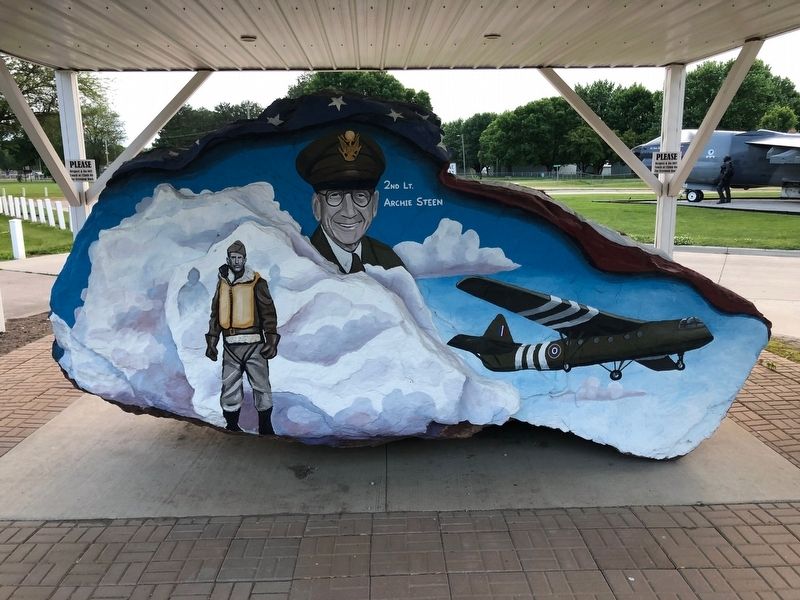 Photographed By Ruth VanSteenwyk, June 17, 2019
5. Onawa Freedom Rock Veterans Memorial
glacial erratics appear worn and rounded, and sometime include beveled or faceted surfaces. During the course of their journey, the rocks were jostled against other erratics or scraped against the underlying bedrock, rounding off corners and planning smooth surfaces, eventually producing their characteristic appearance. The vast majority are igneous or metamorphic rocks. Rather than the usually sedimentary rocks of sandstone, limestone, dolomite, and shale that constitute the bedrock under most of Iowa. If you pick up a granite rock, composed of interlocking crystals of pink feldspar and glassy quartz, you can be sure it is not native and that it came from outside the staee, most likely carried by glacial ice.

In western Iowa, erratics generally lie buried beneath wind-deposited silts (loess) that cover the glacial materials. In these areas, erratics generally are restricted to valleys, where streams have eroded through the loess and into the underlying glacial deposits. This ice melted away about 12,500 years ago, leaving a significant number of boulders (like Monona County's Freedom Rock) across the Iowa landscape. This region known as the Iowan Surface, was left with loess deposits mantling steeply rolling terrain composed of glacial materials deposited in Iowa over 500,000 years ago. 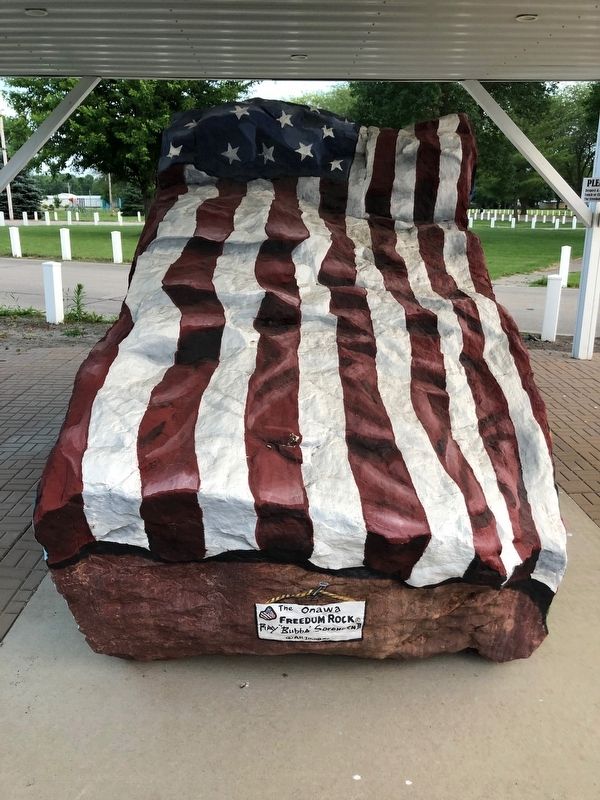 Photographed By Ruth VanSteenwyk, June 17, 2019
6. Artist's Signature
weighing approximately 75,600 lbs. - or nearly 50 tons. The "Rock" was originally uncovered at the bottom of the Dunlap Pits near Dunlap, Iowa by a local crew of workers in 1979. They included Kenny Mings, Dale Cooper, Gail Lee, Harold Nutt, Warren Parsley, Mike Sorenson and LeRoy Montange. A 235 "Cat" backhoe dug the rock out and a D7 and D8 "Cat" pulled it out. Pebble's Rock used his end loader as well. The "Rock" came to Onawa and sat just across the street to the east as Peter's Aggregate Company for over 30 years. When the property was sold to Northern Ag, the rock became their property and they graciously donated it for our "Freedom Rock" project. The "Rock" was moved to this site on August 30th, 2013.

The "Freedom Rock" was painted by artist Ray "Bubba" Sorensen II on August 17-25, 2016. This project was coordinated by the Monona County veterans Memorial Museum Executive Director/Curator William A. Wonder.

Our sincerest thanks to these sponsors and to everyone who contributed to this project:

They gave their tomorrow for our today.
[WWII bomber and a few Hueys and some silhouetted ships in the background. In the foreground it is a flag draped coffin and a soldiers cross]
_ _ _ _ _ _ _ _ _ _

Topics and series. This memorial is listed in these topic lists: War, Afghanistan • War, World II. In addition, it is included in the Freedom Rock Memorials series list.