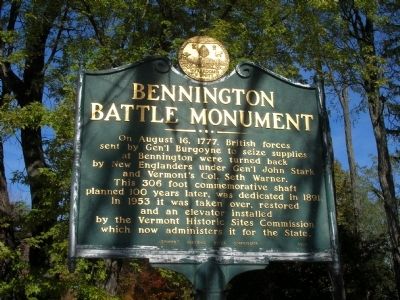 Photographed By Howard C. Ohlhous, October 25, 2008
1. Bennington Battle Monument Marker
Inscription.
Bennington Battle Monument. . On August 16, 1777, British forces sent by Gen'l Burgoyne to seize supplies at Bennington were turned back by New Englanders under Gen'l John Stark and Vermont's Col. Seth Warner. This 306 foot commemorative shaft planned 100 years later, was dedicated in 1891. In 1953 it was taken over, restored and an elevator installed by the Vermont Historic Sites Commission which now administers it for the State. . This monument was erected in 1957 by Vermont Historic Sites Commission. It is in Old Bennington in Bennington County Vermont

On August 16, 1777, British forces sent by Gen'l Burgoyne to seize supplies at Bennington were turned back by New Englanders under Gen'l John Stark and Vermont's Col. Seth Warner. This 306 foot commemorative shaft planned 100 years later, was dedicated in 1891. In 1953 it was taken over, restored and an elevator installed by the Vermont Historic Sites Commission which now administers it for the State.

Topics. This historical marker and monument is listed in this topic list: War, US Revolutionary. A significant historical date for this entry is August 16, 1777. 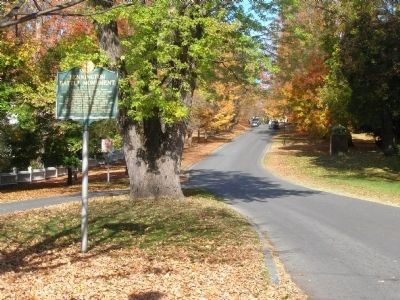 Following the Battle, Burgoyne wrote to his superior, Lord Germaine, "The New Hampshire Grants in particular, a country unpeopled and almost unknown in the last war, now abounds in the most active and most rebellious race on the continent and hangs like a gathering storm on my left."

The Battle of Bennington was of no small consequence. The mostly untrained Yankees had overwhelmingly defeated some of Europe's best trained, disciplined, and equipped troops. As a result of 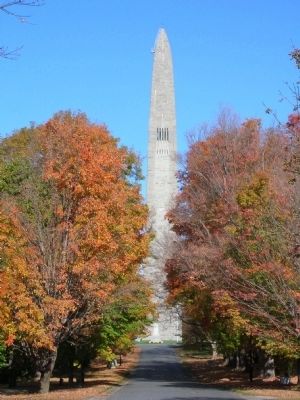 Photographed By Howard C. Ohlhous, October 25, 2008
3. Bennington Battle Monument
The Monument is in the center of Monument Circle at the head of Monument Ave.
the Battle of Bennington a large percentage of Burgoyne's army had been killed, wounded or captured and much of their already short supply of needed military stores had been captured by the American forces. The American's valuable stock of supplies in Bennington had been saved, and Burgoyne's ambitious plan for a quick march to Albany had been halted.

Due in large part to the lack of the much needed supplies, Burgoyne, on October 7, 1777, surrendered with his entire command of some 8,000 British, Hessian and Brunswick troops at Stillwater, New York, following the Battle of Saratoga, a major turning point for the American Revolution.


The Bennington Battle Monument
A group wishing to commemorate the Battle of Bennington decided a monument should be erected at the storage site of the military supplies which had been the objective of the battle.

In 1876, the Vermont General Assembly passed an act establishing the Bennington Battle Monument Association as an outgrowth of the Bennington Historical Society.

Even earlier, in 1854 (77 years following the Battle) the Legislature of Vermont had established and founded an Association to erect a monument; but because of difficulties in raising the needed additional money, the group disbanded after two years.

This new organization, with the Nation's Centennial 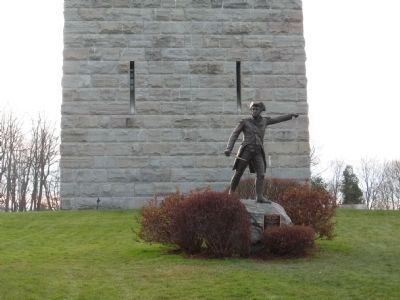 Photographed By Tony Farrick, November 21, 2012
4. Gen. John Stark at the Bennington Battle Monument
The plaque at the base reads:
Brigadier General
John Stark
1728 - 1822
Victor of the Battle
at Bennington
1777
"There they are boys!
We beat them today
Or Molly Stark sleeps
A widow tonight!"
Design by John Rogers - 1889
Sculpture by Robert Shure
Give of John Brooks Threlfall - 1999
celebration behind them and with the approach of Vermont's Centennial in 1891, aggressively worked toward the erection of a suitable memorial. The State of Vermont appropriated $15,000; New Hampshire $5,000; Massachusetts $10,000; the Congress of the United States $40,000; and with approximately $32,000 raised through private contributions, the amount of $102,000 was obtained to construct the memorial.

In 1886, the Vermont Legislature authorized an additional $10,000 to purchase the property where the monument was to be erected. Meanwhile, the debate raged as to whether a sculptural or architectural monument should be constructed. After reviewing various proposals, the committee decided on the design submitted by John Phillipp Rinn, an architect from Boston. The contractor was William Ward of Lowell, Massachusetts.

Construction began with the placement of the cornerstone on August 16, 1887 and the Monument was completed with the placement of the capstone amid a grand ceremony on November 25, 1889. The original Monument plan called for steep wooden stairs or a series of straight-up ladders. Architect Rinn rejected these designs and set out to create an easy-climb stairway, which made the observation level accessible to millions of visitors. (The 417 steps carried visitors up the monument for 70 years until they were closed to the public around 1960 when the elevator 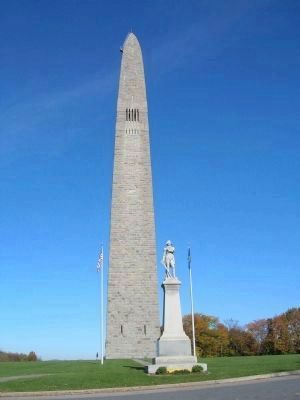 Photographed By Howard C. Ohlhous, October 25, 2008
5. Bennington Battle Monument
The Colonel Seth Warner monument is in the foreground.
was installed.) The interior and steps were finished and the monument was dedicated on the 100th Anniversary of Vermont's admission as the 14th state in the Union, on August 19, 1891.

The Bennington Battle Monument is 306 feet 4 and 1/2 inches tall; the cornerstone was laid in 1887, and the monument completed and dedicated in 1891. It is constructed from blue-grey magnesian limestone (known as Sandy Hill Dolomite from present-day Hudson Falls, New York), which is rough-faced, with the exception of two horizontal bands near the observatory level. The base is 37 feet square and with a gradual diminishing curve rises upward 168 feet where the rock-faced stone changes to a smooth horizontal belt course of 8 feet; above this is a band of rock-faced stone punctuated by twenty, eleven-foot slotted openings at the observation level. From this level, now reached by and elevator, can be seen the valleys and rolling hills of Vermont, New York, and Massachusetts. Above the windows is an additional smooth beltcourse of 13 feet from which soars, uninterrupted but diminishing more rapidly, the final stone portion of 101 feet, 10 and 1/2 inches to the apex, which is surmounted by a bronze and gilt ten-point star adding the final 4 feet 6 inches to the Monument's height. The point of the star are each 18 inches long and serve as a lightning rod for the monolith, the tallest structure in 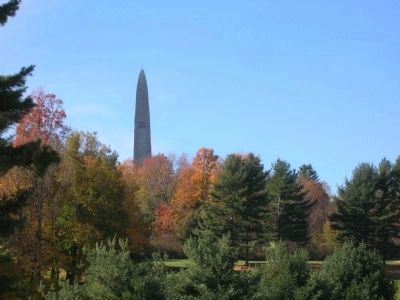 Photographed By Howard C. Ohlhous, October 25, 2008
6. Bennington Battle Monument
The Monument in the distance, as seen from the east.
the State of Vermont.

In 1952, the Bennington Monument Association transferred the ownership and operation of the Monument to the Vermont Board of Historic Sites, which later became the Vermont Division for Historic Preservation.

In 1964, the State commissioned Paul V. Winters, a Vermont artist, to construct a diorama depicting the Second Engagement of the hard fought Bennington Battle. This fine work, in full color, is historically accurate, the detail well authenticated by research. Also displayed within the Monument entrance an immense iron kettle, which was part of the camp equipment of General Burgoyne’s army at Saratoga.

On the grounds of the Monument are a number of additional monuments. The largest is the heroic figure of Seth Warner, commander of the Green Mountain Boys who helped defeat the British forces in the Second Engagement of the Battle; cut from granite, the monument was donated in 1910 by Colonel Olin Scott.

Also prominently displayed is a large granite boulder with a bronze tablet, which was placed in honor of General John Stark and the 1,400 New Hampshire men who were involved in the Battle; this was donated by the Citizens of New Hampshire in 1977.

In 2000 John Threlfall donated to the Monument a bronze statue of General John Stark. This statue was cast from a plaster model executed in 1889 by American sculptor 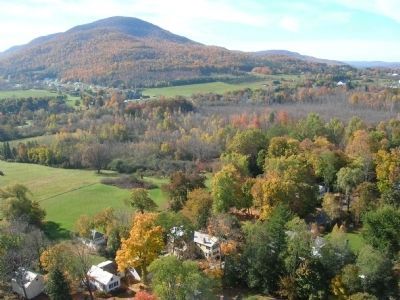 Photographed By Howard C. Ohlhous, October 25, 2008
7. View From the Monument
The narrow windows of the monument's observation deck at 176 feet above the ground provide views in all four directions. This view is to the west.
John Rogers. A number of other memorials are on the grounds around the main monument.

Also see . . .  Record, history, and description of the Bennington Battle Monument. This book was originally published in 1887. (Submitted on October 1, 2009.)

Additional commentary.
1. Donations to build the monument
Ominda Gerry, my ancestor (aunt), was the first to donate money to build the monument. Her donation was $100.00 - that was a lot of money at that time. She was lived to be in her 90's and is buried in the congregational church cemetary in Bennington.
Editor's Note: Mrs. Gerry was also a descendent of a soldier who fought in the battle.
— Submitted September 30, 2009, by Diana Fyfe of Orlando, Florida. 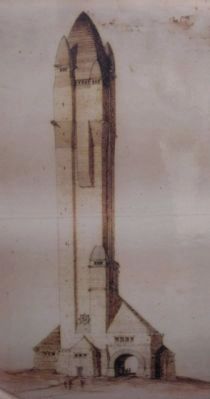 Photographed By Howard C. Ohlhous, October 25, 2008
8. Rejected Design Proposal
This is a photo of an architects drawing of a skipped over proposed design for the Bennington Battle Monument. The image is on display in the small gallery inside at the base of the monument. 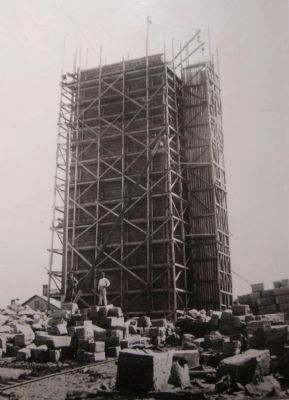 Photographed By Howard C. Ohlhous, October 25, 2008
9. Bennington Battle Monument Under Construction
This is the monument under construction. During construction the blocks of dolomite stone are laid in a pattern know as headers and stretchers. The stones are cut at the site into long, thick blocks; the stretchers are laid lengthwise and the headers are laid with the ends to the outer wall running through to the inside of the structure. The joints are filled with coarse sand and Portland cement. The corner stone (thought to be the southeast corner) is seven feet long, more than two feet thick and is estimated to weigh five tons. On August 16, 1887 the Grand Lodge of Vermont Free and Accepted Masons lay the cornerstone which contains a time capsule filled with memorabilia. The image is also on display in the small gallery inside at the base of the monument. 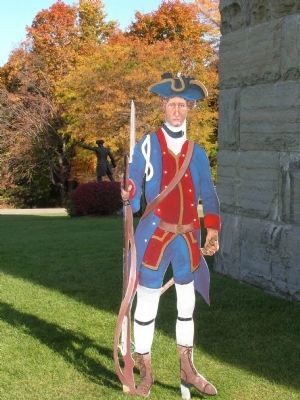