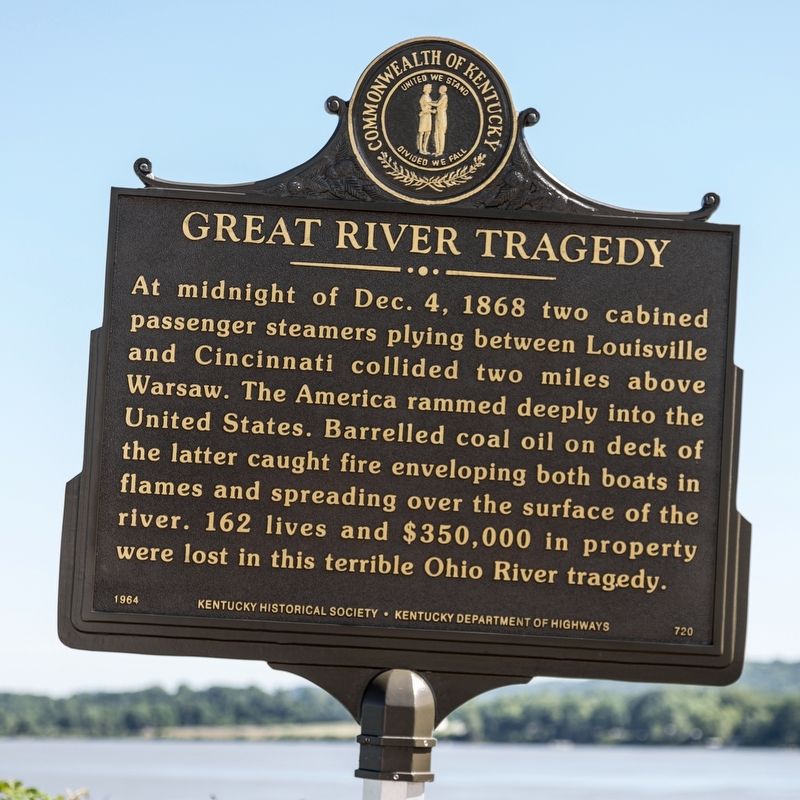 Photographed By J. J. Prats, June 12, 2019
1. Great River Tragedy Marker
Inscription.
Great River Tragedy. . At midnight of Dec. 4, 1868 two cabined passenger steamers plying between Louisville and Cincinnati collided two miles above Warsaw. The America rammed deeply into the United States. Barrelled coal oil on deck of the latter caught fire enveloping both boats in flames and spreading over the surface of the river. 162 lives and $350,000 in property were lost in this terrible Ohio River tragedy. . This historical marker was erected in 1964 by Kentucky Historical Society and Kentucky Department of Highways. It is Near Warsaw in Gallatin County Kentucky

At midnight of Dec. 4, 1868 two cabined passenger steamers plying between Louisville and Cincinnati collided two miles above Warsaw. The America rammed deeply into the United States. Barrelled coal oil on deck of the latter caught fire enveloping both boats in flames and spreading over the surface of the river. 162 lives and $350,000 in property were lost in this terrible Ohio River tragedy.

Topics and series. This historical marker is listed in these topic lists: Disasters • Waterways & Vessels. In addition, it is included in the Kentucky Historical Society series list. A significant historical date for this entry is December 4, 1868. 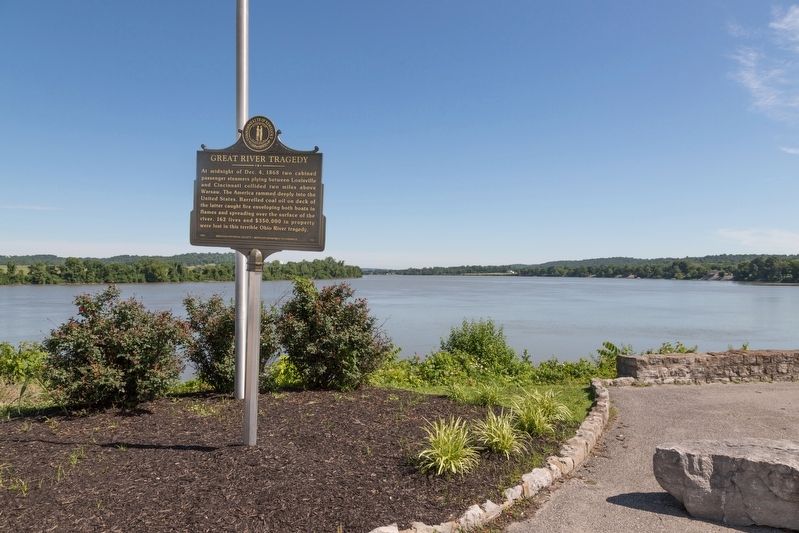 Click or scan to see
this page online
the mouth of Big Sugar Creek at the Ohio River. It is across from the Sugar Creek Boat Ramp. Touch for map. Marker is in this post office area: Warsaw KY 41095, United States of America. Touch for directions.

More about this marker. This is a replacement marker. The original was erected at 2nd and E Main Streets in Warsaw.

Also see . . .  Wikipedia entry for steamboat “guards”. The article which follows repeatedly uses this word. “Guards on a steamboat were extensions of the main deck out from the boat’s main hull. Guards were originally adopted for side-wheel steamboats to protect the paddle wheels and to provide a mounting point for the outer ends of the paddle wheel shafts. The main deck planking extended out over the guards, and when a steamboat was fully loaded, and sunk deeply in the water, it often appeared that the edges of the guards marked the line of the hull.” (Submitted on July 1, 2019.) 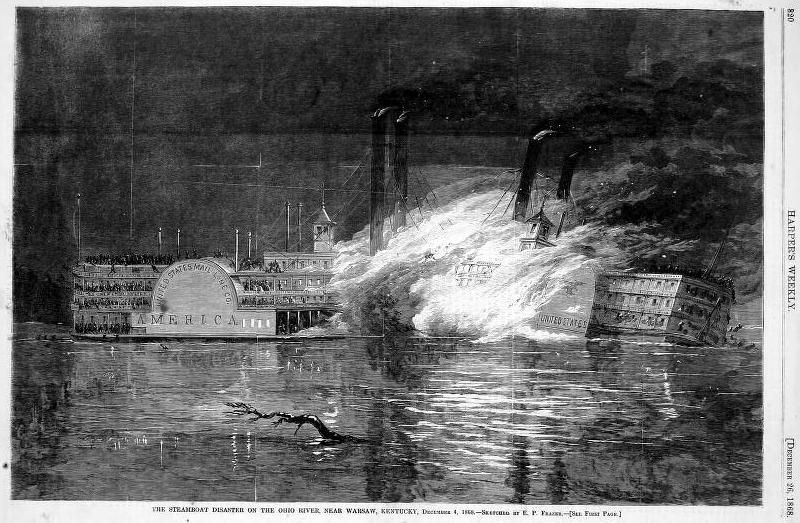 Sketched by E.P. Frazer for Harper’s Weekly, December 26, 1968
3. The Steamboat Disaster on the Ohio River near Warsaw, Kentucky
1. Steamboat Disaster on the Ohio River
Front page article in the New York City journal Harper’s Weekly December 26, 1868 issue, from which illustration No. 3 on this page was taken. Interestingly, the loss of life count in the article does not match the marker’s.


Even in a year which has furnished so full a record of disasters by land and water it is difficult to find a story more painful than that of the recent collision of the two steamboats United States and America, on the Ohio River.

The accident took place on the night of December 4, a little after eleven o’clock. The United States, a splendid three-decker, was descending the river to Louisville. Just opposite Rayl’s Landing, one mile above Warsaw, Kentucky, she collided with the America, which was ascending the river. The United States was sunk, but not before she was enveloped in flames, which were instantly communicated to the other steamer. Both vessels were destroyed in less than five minutes. The fire was caused by the collision, which forced a number of barrels of petroleum that were on the guards of the United States into the furnace; at least this is the statement made by Mr. Andrew Harrigan, second clerk on that vessel. 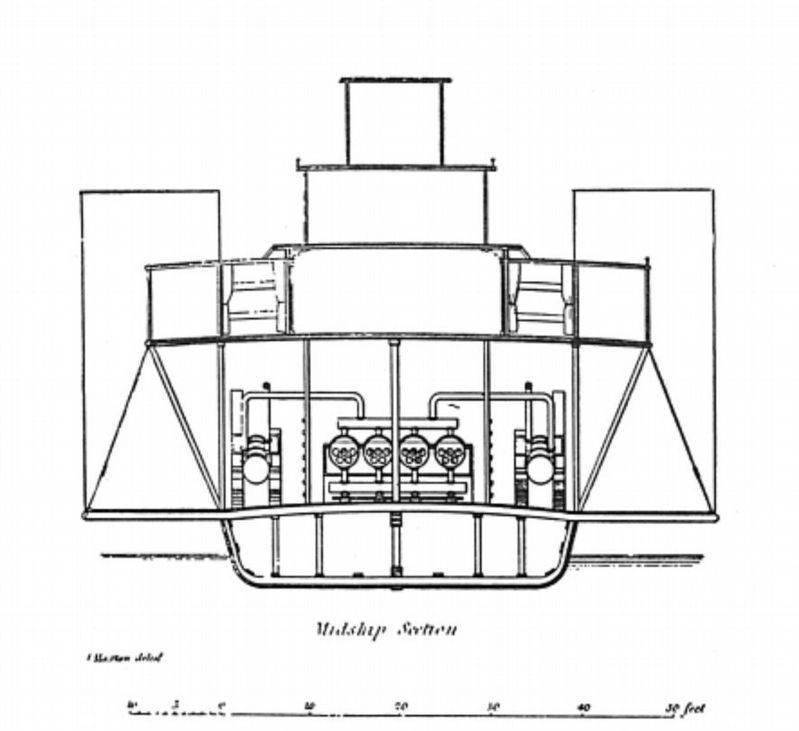 1861
4. Steamboat Cross Section
The guards are the portion of the ship that extend beyond the hull on both sides. This illustration is from the 1861 book Steamboats of the Western Rivers by Louis C. Hunter.
The cargo on both steamers was of a very inflammable material—consisting of brooms, whisky, cotton, bacon, etc. To this circumstance the speedy destruction of both vessels is to be attributed. The catastrophe was sudden, and there was an immense loss of life, mainly, however, on the United States, which lost 35 out of 65 passengers.

Captain R. M. Wade, who makes this statement, says that it was a dark but not a foggy night. “The America,” he reports, “went into the Slates on the larboard, abreast of the baggage-room, and only cut through the guards and few of the top timbers of the hull. The flames appeared to come instantaneously with the crash on both boats—shooting up above the top of the hurricane-roof of the States, where I was standing. The wind was blowing hard up stream. The States backed into the Indiana shore, where her head swung quartering out into the stream, going down in a few seconds. The America blew two whistles, which was answered by the States by one whistle, or it was all I could hear, owing to the high wind. The States blew blew again, but we could not hear the America’s reply.”' After the collision the boats appear to have been separated for a brief interval, but, according to the second clerk’s statement, came together again, and a number of passengers were saved by jumping on board the America.”

This clerk says there were 75 passengers on board the United States, and that of this number 25 were ladies. “There were,” he says, “two bridal parties on the boat, and some of the passengers thought they would have a little fun in serenading them, which they did, and some twenty minutes after the serenade the collision occurred; and I think if it were not for the serenade the bridal parties would have been lost; but as they were in their state-rooms awake, they were apprised of the danger in which they were, and got off the United States on to the America; and as their state-rooms were on the same side as the America they were saved. The scene in the cabin at the time was indescribable. Several ladies stood throwing their children overboard and crying for assistance. Upon the guards a number of ladies stood, wringing their hands and crying for help, but they would not leave the place they were in, and perished in the flames. Previous to the disaster we were enjoying ourselves in the cabin dancing, and the passengers had just entered their state-rooms.”

The panic occasioned on board both vessels was beyond description. There was no time to dress, and some of the ladies in their attempts to escape the raging flames lost even their night-clothes. Old Bull, the celebrated violinist, was one of the passengers on the America. He escaped by wading to the shore with his violin. Many other passengers on this vessel owe their escape to the efforts of the clerk, C. W. Taylor, who burst open the doors of their state-rooms and dragged them out of their beds. In some cases ladies who were attempting to escape by means of floating shutters were ruthlessly hurled from their refuge by men.

The people of Warsaw deserve most grateful mention for their efforts to alleviate the sufferings and to supply the temporary wants of the distressed victims of this disaster.