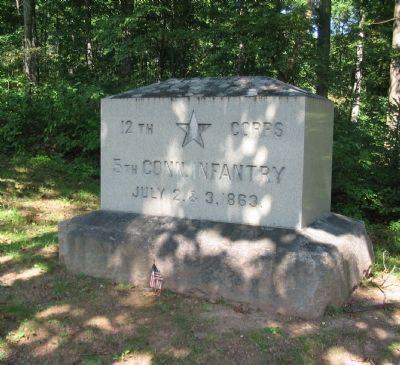 Photographed By Craig Swain, September 17, 2008
1. 5th Connecticut Infantry Monument
A star, the symbol of the Federal XII Corps, is displayed in the upper center of the monument.
Inscription.
5th Connecticut Infantry. 12th Corps.
12th Corps 5th Conn. Infantry July 2. and 3. 1863. 1st Brig. 1st Div.. . This memorial was erected in 1887 by State of Connecticut. It is in Cumberland Township in Adams County Pennsylvania

Erected 1887 by State of Connecticut.

Location. 39° 48.949′ N, 77° 13.069′ W. Marker is in Cumberland Township, Pennsylvania, in Adams County. Memorial is on Slocum Avenue, on the right when traveling west. Located on the lower crest of Culp's Hill in Gettysburg National Military Park. Touch for map. Marker is in this post office area: Gettysburg PA 17325, United States of America. Touch for directions. 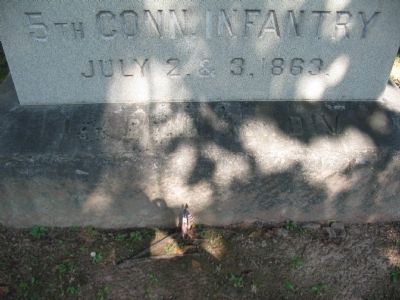 Photographed By Craig Swain, September 17, 2008
2. Base of Monument
Hard to see due to shadings and discolorations are the Brigade and Division inscriptions at the base of the monument. 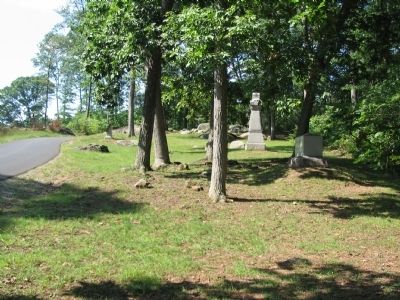 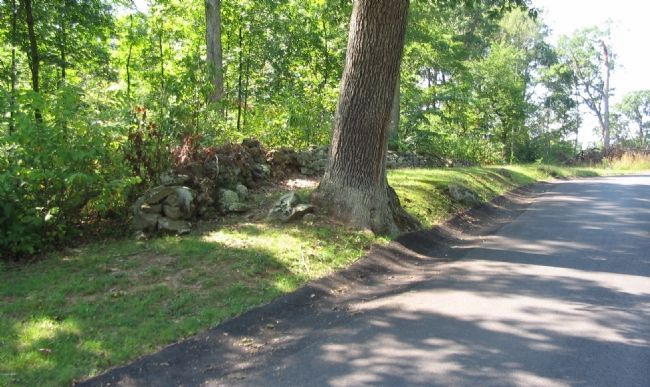 Photographed By Craig Swain, September 17, 2008
4. 5th Connecticut Infantry at the Wall
The 5th Connecticut Infantry was posted on the right flank of the second line of McDougall's Brigade, here at the base of the wall to the left of modern day Slocum Avenue. The Regiment was called, with the Brigade, to reinforce the Federal left flank in the afternoon of July 2, abandoning this position. Confederates occupied the positions here in their absence. On July 3rd, the 5th Connecticut remained with the rest of the Brigade posted to the southwest, close to the Baltimore Pike.
Credits. This page was last revised on December 3, 2020. It was originally submitted on November 17, 2008, by Craig Swain of Leesburg, Virginia. This page has been viewed 941 times since then and 21 times this year. Photos:   1, 2, 3, 4. submitted on November 17, 2008, by Craig Swain of Leesburg, Virginia.
Share this page.