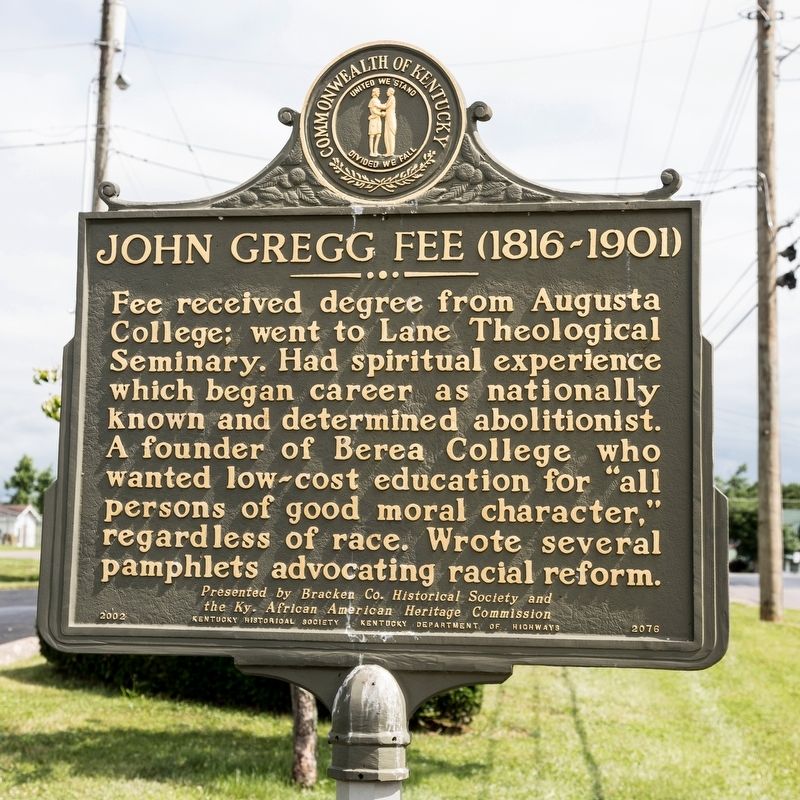 Photographed By J. J. Prats, June 13, 2019
1. John Gregg Fee side of marker
Inscription.
John Gregg Fee, also, Arnold Gragston. (1816–1901), also, . , John Gregg Fee. Fee received degree from Augusta College; went to Lane Theological Seminary. Had spiritual experience which began career as nationally known and determined abolitionist. A founder of Berea College who wanted low-cost education for “all persons of good moral character,” regardless of race. Wrote several pamphlets advocating racial reform. , Arnold Gragston. While living on the Jack Tabb farm, Gragston, born circa 1840, helped many slaves escape to freedom. This African American rowed slaves from Dover (Mason County) across Ohio River under cover of dark nights. Almost caught returning from one crossing, he escaped to woods. After more than four years of helping others, he crossed river and became a free man. Died, 1938. . This historical marker was erected in 2002 by Kentucky Historical Society and Kentucky Department of Highways. Presented by Bracken County Historical Society and the Kentucky African American Heritage Commission. It is in Germantown in Bracken County Kentucky

Arnold Gragston. While living on the Jack Tabb farm, Gragston, born circa 1840, helped many slaves escape to freedom. This African American rowed slaves from Dover (Mason County) across Ohio River under cover of dark nights. Almost caught returning from one crossing, he escaped to woods. After more than four years of helping others, he crossed river and became a free man. Died, 1938.

Topics and series. This historical marker is listed in these topic lists: Abolition & Underground RR 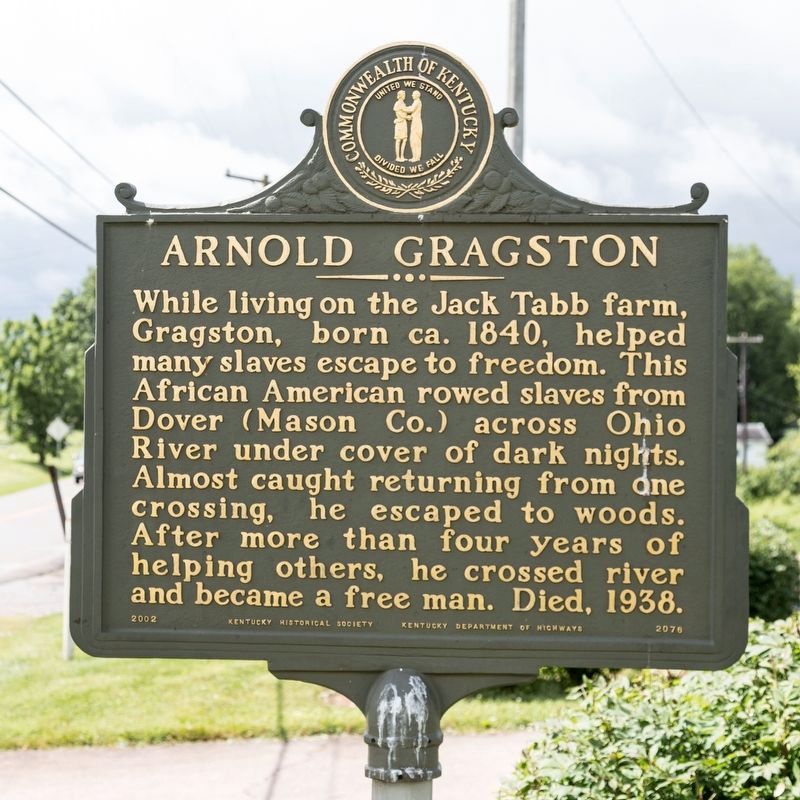 Click or scan to see
this page online
• African Americans • Education. In addition, it is included in the Kentucky Historical Society series list. A significant historical year for this entry is 1840.

Also see . . .
1. Encyclopedia.com entry for John Gregg Free. “John Gregg Fee was an unusual American abolitionist, for he carried out his agitation in a border state, where slavery was legal and anti-abolitionist feelings 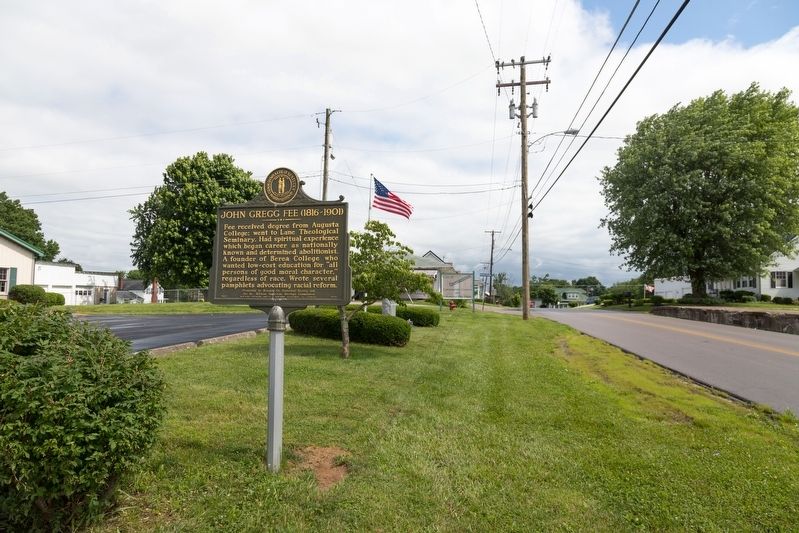 I didn’t have no idea of ever gettin’ mixed up in any sort of business like that until one special night. I hadn’t even thought of rowing across the river myself.

But one night I had gone on another plantation ’courtin’, and the old woman whose house I went to told me she had a real pretty girl there who wanted to go across the river and would I take her? I was scared and backed out in a hurry. But then I saw the girl, and she was such a pretty little thing, brown-skinned and kinda rosy, and looking as scared as I was feelin’, so it wasn’t long before I was listenin’ to the old woman tell me when to take her and where to leave her on the other side.

I didn’t have nerve enough to do it that night, though, and I told them to wait for me until tomorrow night. All the next day I kept seeing Mister Tabb laying a rawhide across my back, or shootin’ me, and kept seeing that scared little brown girl back at the house, looking at me with her big eyes and asking me if I wouldn’t just row her across to Ripley. Me and Mr. Tabb lost, and soon as dust settled that night, I was at the old lady’s house.

I don’t know how I ever rowed 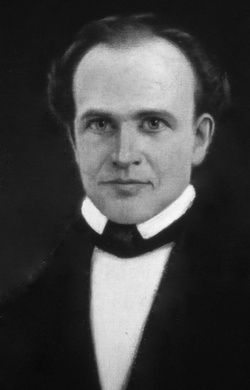 Source: Robert s. Damrell Jr., via Find A Grave
4. John Gregg Fee (1816-1901)
the boat across the river the current was strong and I was trembling. I couldn’t see a thing there in the dark, but I felt that girl’s eyes. We didn’t dare to whisper, so I couldn’t tell her how sure I was that Mr. Tabb or some of the others owners would “tear me up” when they found out what I had done. I just knew they would find out.

I was worried, too, about where to put her out of the boat. I couldn’t ride her across the river all night, and I didn’t know a thing about the other side. I had heard a lot about it from other slaves but I thought it was just about like Mason County, with slaves and masters, overseers and rawhides; and so, I just knew that if I pulled the boat up and went to asking people where to take her I would get a beating or get killed.

I don’t know whether it seemed like a long time or a short time, now – it’s so long ago; I know it was a long time rowing there in the cold and worryin’. But it was short, too, ’cause as soon as I did get on the other side the big-eyed, brown-skin girl would be gone. Well, pretty soon I saw a tall light and I remembered what the old lady had told me about looking for that light and rowing to it. I did; and when I got up to it, two men reached down and grabbed her; I started tremblin’ all over again, and prayin’. Then, one of the men took my arm and I just felt down inside of me that the Lord had got ready for me. “You hungry, Boy?” is what he asked me, and if he hadn’t been holdin’ me I think I would have fell backward into the river.

That was my first trip; it took me along time to get over my scared feelin’, but I finally did, and I soon found myself goin’ back across the river, with two and three people, and sometimes a whole boatload. I got so I used to make three and four trips a month.