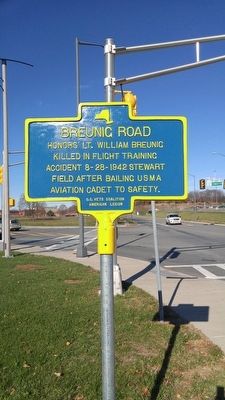 Topics. This historical marker is listed in these topic lists: Disasters • War, World II. A significant historical date for this entry is August 28, 1943.

Location. 41° 29.683′ N, 74° 6.088′ W. Marker is in New Windsor, New York, in Orange County. Marker is at the intersection of Bruenig Rd and International Blvd., on the left when traveling north on Bruenig Rd. Touch for map. Marker is in this post office area: New Windsor NY 12553, United States of America. Touch for directions.

More about this marker. Marker is located on the roads leading to the main entrance of Stewart International Airport, formerly Stewart Field.

Click or scan to see
this page online
Lt. Bruenig was from Stamford Ct. and was assigned to help train cadets to fly. He was here only a short time the field was dedicated on Aug 25, 1942 his 22nd birthday. He was skilled pilot at 19 yrs of age. He was buried at his hometown in Ct.

“On the morning of Aug. 28, 1942 Lt. Breunig was assigned USMA Cadet Richard H. Huser of the second flying class. They took off from Stewart Field shortly before 10 AM on a routine training flight when the BT-13A Vultee trainer began to develop engine trouble. Lt. Breunig was able to maintain flight while he had Cadet Hauser bail out.

The plane crashed on a farm near Walden.

There is an airworthy BT-13A Vultee aircraft previously assigned to Stewart Field on display at the Mid Atlantic Air Museum in Reading, PA