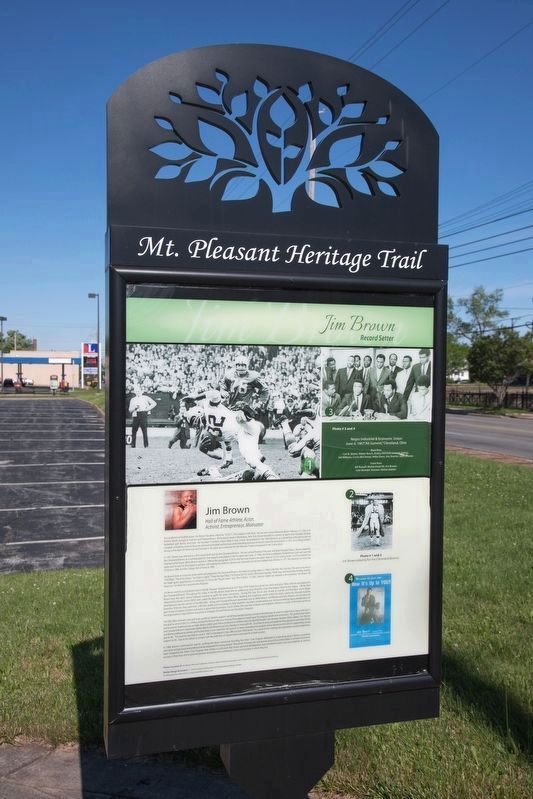 Jim Brown, Hall of Fame Athlete, Actor, Activist, Entrepreneur, Motivator. As a professional football player Jim Brown has been called the “G.O.A.T.,” The Greatest of All Time. He was born James Nathaniel Brown February 17, 1936 in St. Simons Island, Georgia to Swinton and Theresa Brown. While being raised in Manhasset, New York, Brown excelled in a variety of sports that included: football, basketball, golf, tennis, and track. He received 13 athletic letters while in high school. He qualified for the 1956 Olympics as a decathlete although he did not compete. Instead he chose to focus on and excel at football and lacrosse while attending Syracuse University where he earned a B.A. in 1957. As a college student, he was a first team All-American and finished in 5th place as a contender for the Heisman Trophy and played in the Cotton Bowl.

In 1957, Brown was selected as a first round draft pick by the Cleveland Browns. He was named Rookie of the year and Most Valuable Player. Brown played for the Cleveland Browns as a running back for nine seasons and played in the Pro Bowl each year. In 1964, the Browns defeated the Baltimore Colts and won the Championship Game. When Brown retired in 1966 at the young age of 29 he had the most impressive career stats of 12,312 rushing yards, 15,576 combined net yards, and he was the first player to achieve 100-rushing-touchdowns. Brown was inducted into the Pro Football Hall of Fame in 1971, the National Lacrosse Hall of Fame in 1983 and the College Hall of Fame in 1995. 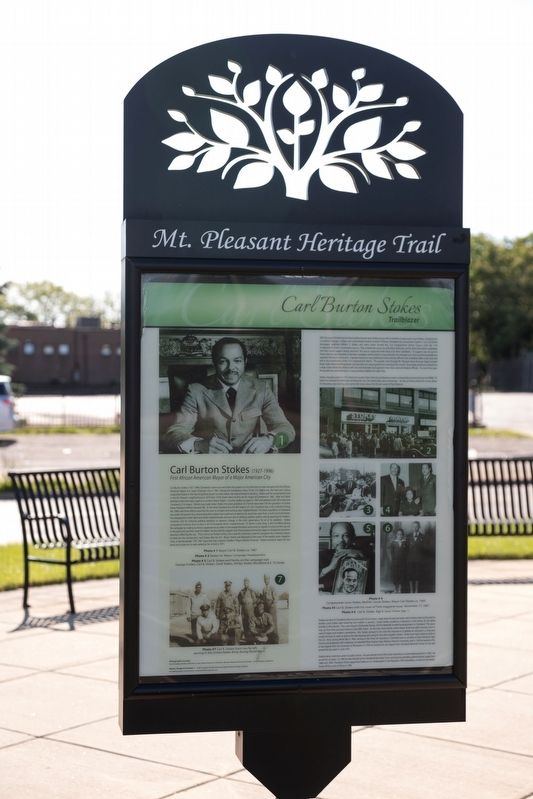 Click or scan to see
this page online
Brown took on a second career while still playing for the Cleveland Browns. He made his acting debut in 1964 in the film “Rio Conchos.” He went on to star in “100 Rifles,” “The Dirty Dozen,” “Ice Station Zebra,” “Three the Hard Way,” “I’m Gonna Git You Sucka,” “Any Given Sunday,” “Draft Day,” and more than 35 other movies. He made guest appearances in numerous TV show like “Knight Rider” and “The A-Team.” In 2002, director Spike Lee released a documentary “Jim Brown: All American” of which he is prominently featured.

Jim Brown and his young family lived in the Mt. Pleasant neighborhood at 3277 East 147th Street during the late 1950s and early 1960s while he was playing for the Cleveland Browns. Throughout his career in the NFL Brown stood firm on addressing racial disparity issues that players faced in the league. Off the field Brown took the same stance tirelessly working to uplift the black community. During this time Brown also served as Founder and President of the Negro Industrial Economic Union (NIEU) later called the Black Economic Union (BEU). Building and sustaining wealth within the black community through business development was the mission of the NIEU/BEU. Along with Cleveland Browns teammates such as Walter Beach, Sid Williams and John Wooten who served as its Executive Director, they used their collective wealth and knowledge to help establish new black owned enterprises and assist existing black entrepreneurs to gain access to capital investors and loans to grow their businesses. Carl B. Stokes who was then a lawyer and neighbor of Brown’s on East 147th Street served as the organizations Legal Advisor and political 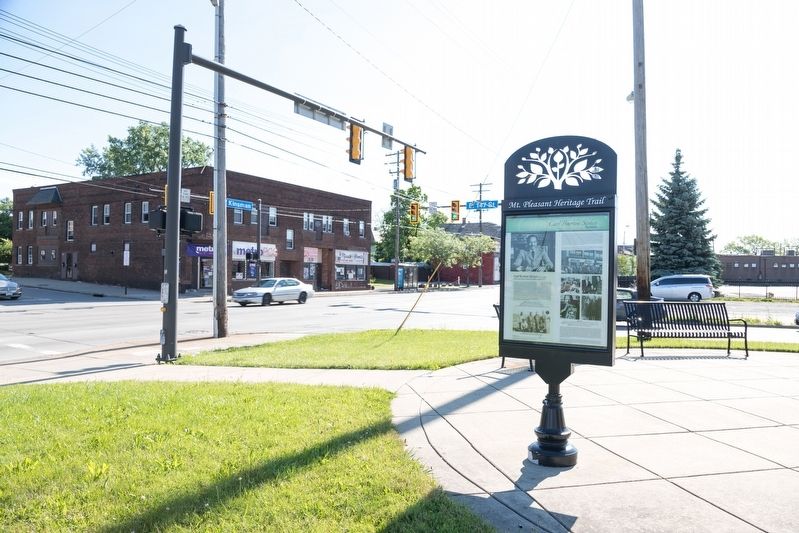 The NIEU/BEU stressed unity and took a political stand to support world heavyweight boxing champion Muhammad Ali when he objected to being selected in the draft to serve in the U.S. military during the Vietnam War as a conscientious objector based upon his religious beliefs and convictions. Ali’s professional career and economic livelihood was at stake. Brown called upon fellow professional athletes that included Bill Russell, Lew Alcindor (Kareem Abdul Jabbar,) Jim Shorter and Cleveland Browns teammates Walter Beach, Sid Williams and John Wooten to meet with Ali. In a show of unity and solidarity they agreed to assist their friend and fellow professional athlete and hosted what is now called the “Ali Summit” to learn more about his position and to determine the level of support they would give to Ali. This summit was held on June 4, 1967 in Cleveland in their office at East 105th Street. As a result of this meeting the organization gave its unanimous support to Ali. Due to his refusal to comply with the draft the U.S. Government convicted Ali of draft evasion.

In 1988, Browns continued his zeal for uplifting the black community founding the Amer-I-Can Program dedicated to eradicating gang violence, promoting education and personal and professional development for young people. Thousands of young men and women around the United States in schools and prisons have completed the Amer-I-Can Program that utilizes a curriculum that fosters personal development and self-determination and accountability to achieve success in their lives and to become positive and productive contributors to the communities in which they live. 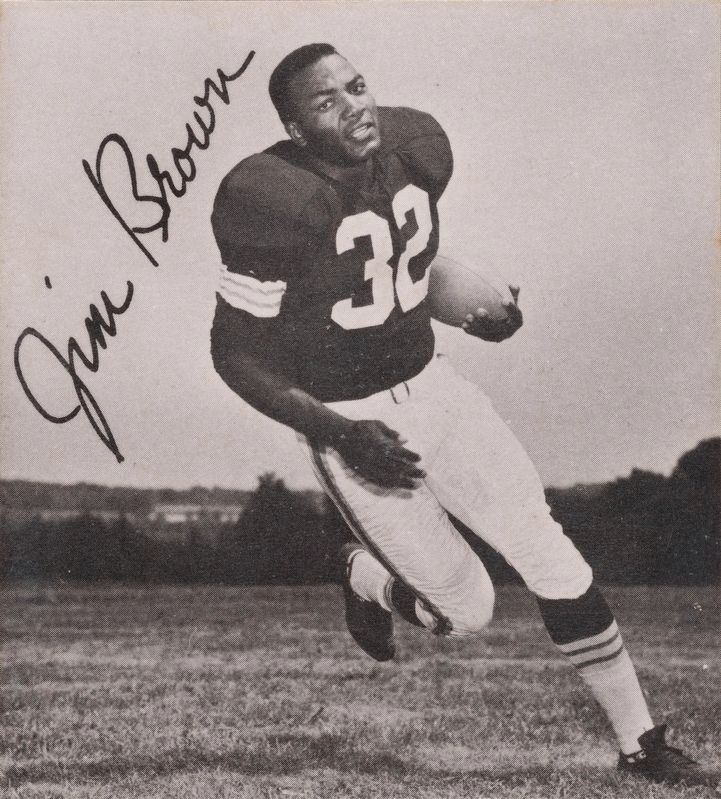 By unknown photographer via Wikipedia Commons, 1961
4. Jim Brown in 1961
Mayor of a Major American City. Carl Burton Stokes (1927-1996) Cleveland’s native son went from the projects to city hall when he was elected as the first African American Mayor of a major American city in 1967. During the tumultuous times of the Civil Rights era, the hard won victory catapulted Stokes to the seat of political power no other black man had achieved in America. Stokes and his young family lived in the Mt. Pleasant neighborhood at 3376 East 147th Street when he first ran for mayor of Cleveland in 1965. After this failed attempt to become mayor against incumbent Mayor Ralph J. Loecher, Stokes ran again in 1967 and defeated Seth Taft to become Cleveland’s 51st mayor. History was made when Stokes the great-grandson of a former slave beat Taft the grandson of United States President William Howard Taft. At the time Cleveland was the 8th largest U.S. city. Cleveland was a city in decline during the 1960s and those effects were felt the most in its black and working class neighborhoods. The black population of Cleveland was under 40 percent thus showcasing that a black man could win an election by receiving votes from a mutli-racial electorate. He campaigned in both black and white neighborhoods and won due to utilizing coalition politics and by asserting his intellect, charisma, and his inclusive political positions to advance change in the city’s governance for all of its residents. Stokes campaigned tirelessly door-to-door in all of Cleveland’s ethnic neighborhoods. Dr. Martin Luther King, Jr. lent his efforts during the campaign by making numerous appearances at rallies to encourage the black community to register to vote and then go out to the polls and cast their votes for Stokes. He also had the support from the business community eager to change the 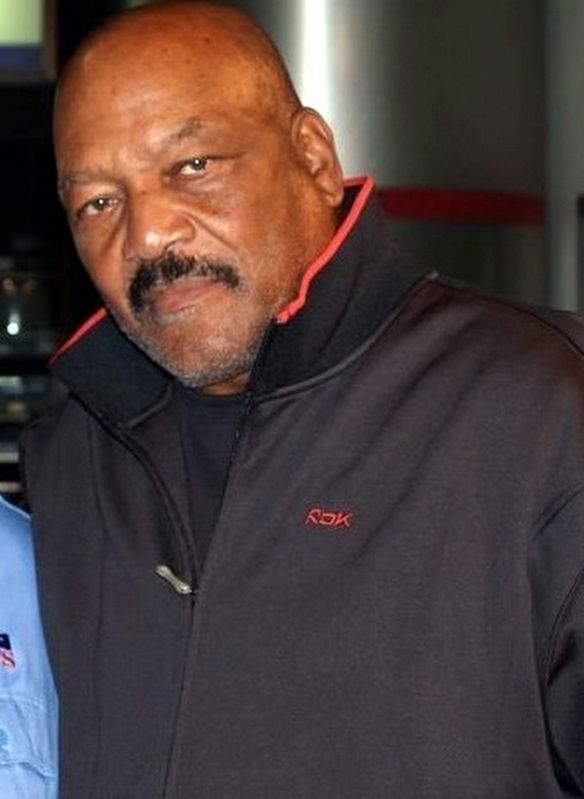 By Phil Konstantin via Wikipedia Commons, November 1, 2007
5. Jim Brown in 2007
economic downturn affecting the city. “This is not a Carl Stokes victory, not a vote for a man but a vote for a program, for a visionary dream of what our city can become,” said Stokes after his win. Mayor Stokes was featured on the cover of the weekly news magazine Time, in the November 17th 1967 issue that had a banner headline “Negro Election Victories.” Stokes served as mayor for two terms and chose not to seek reelection for a third in 1971.

With the goal of bolstering the black political power base Stokes along with his brother Congressman Louis Stokes, Cleveland City Councilman George L. Forbes, and school board member Arnold R. Pinkney, Cleveland City Councilman Charles V. Carr, Call & Post Newspaper publisher William 0. Walker and many others formed the 21st Congressional District Caucus (now the 11th Congressional District Community Caucus). They created the caucus to unify black politicians and to determine which candidates that they would support during elections. The caucus supported both black and white candidates. Its support was not just for Democrats but was extended to the best candidates whose platform was politically the strongest and that would best benefit and represent the black community. A parade and picnic was established where elected officials and candidates alike could meet and talk to the constituents of the 21st congressional district. The parade route through Mt. Pleasant down Kinsman Road included floats, high school marching bands and specialty cars carrying politicians waving to the crowds. The parade and picnic evolved into a large scale community festival with live entertainment and speeches from local, state and federal officials. For over forty years the parade has continued and is a long standing tradition on Labor Day.

Stokes changed careers in 1972 when he moved to New York City and became a news correspondent and anchorman for WNBC-TV. Again he received the distinction of being the city’s first black daily news anchorman. He won an Emmy Award for a story the Broadway play starring actor James Earl Jones about the life and career of Paul Robeson.

Stokes was born in Cleveland, Ohio to Louise and Charles Stokes. Sadly when he was two-years-old his father died and he and his brother Louis Stokes were raised by their mother in poverty. Louise Stokes worked as a domestic in the homes of rich white families in the suburbs. They were raised in Outhwaite Homes, the first federally funded housing project in Cleveland This was a step up from their previous home on East 69th Street At the time many homes where blacks lived was older housing stock in need of repair and modern convenience. Mrs. Stokes stressed to her sons the importance of getting an education so that they would not have to work as hard as she did cleaning and caring for the other people’s homes. Stokes quit high school to enlist in the U.S. Army during World War II. After serving in the Army he returned to Cleveland and re-enrolled at East Technical High School and graduated with a diploma. He attended West Virginia State, Western Reserve University, and in 1954 he earned a BS of law degree from the University of Minnesota. In 1956 he received his law degree from Cleveland Marshall School of La. and passed the bar exam in June 1957.

Stokes had an extensive career in public service. He was elected to the Ohio State Assembly as a State Representative in 1962. He served for six years. In 1983 he was elected to the Cleveland Municipal Court and became presiding administrative judge from 1986 until 1994. President Clinton appointed Stokes as U.S. Ambassador to the Republic of the Seychelles, an Island in the Indian Ocean off the coast of Africa in 1994.

Both sides cite the sources of the images used and show undated copyright notices for marker design and content to Hall Creative Productions and Graphixsphere Design Studio.