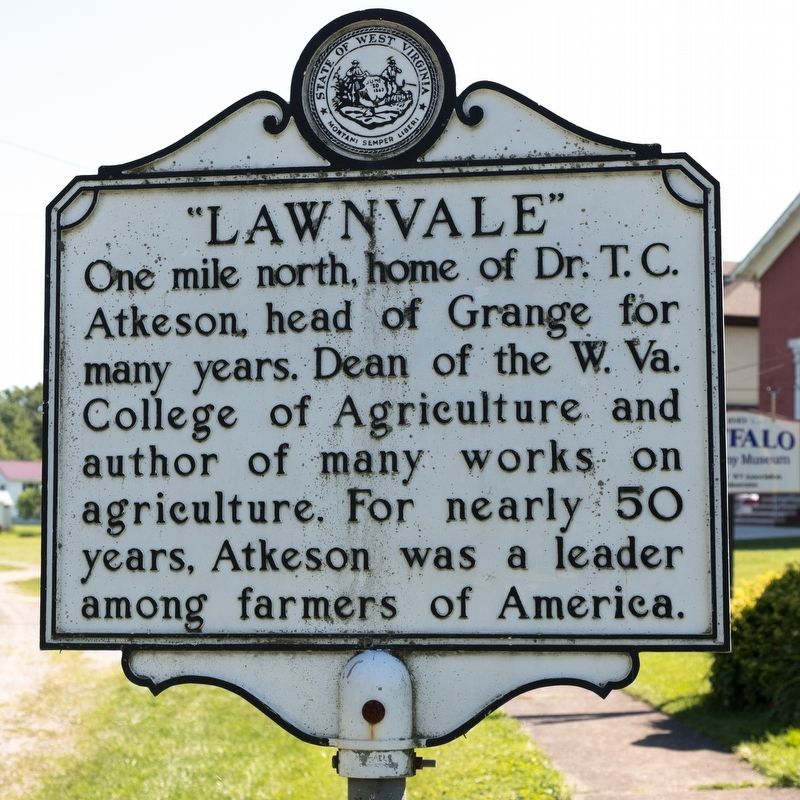 Photographed By J. J. Prats, July 13, 2019
1. The “Lawnvale” side of the marker
Inscription.
“Lawnvale”, also, “Coin” Harvey. . , Lawnvale. One mile north, home of Dr. T. C. Atkeson, head of Grange for many years. Dean of the West Virginia College of Agriculture and author of many works on agriculture. For nearly 50 years, Atkeson was a leader among farmers of America. , Coin Harvey. Birthplace of William Hope “Coin” Harvey, son of Colonel Robert Harvey. Builder of a pyramid at Monte Ne, Arkansas. Author of “Coin’s Financial School” in 1894 and other works on finance, which proposed silver inflation. . This historical marker is in Buffalo in Putnam County West Virginia

Lawnvale. One mile north, home of Dr. T. C. Atkeson, head of Grange for many years. Dean of the West Virginia College of Agriculture and author of many works on agriculture. For nearly 50 years, Atkeson was a leader among farmers of America.

Coin Harvey. Birthplace of William Hope “Coin” Harvey, son of Colonel Robert Harvey. Builder of a pyramid at Monte Ne, Arkansas. Author of “Coin’s Financial School” in 1894 and other works on finance, which proposed silver inflation.

Topics and series. This historical marker is listed in these topic lists: Agriculture • Arts, Letters, Music • Education • Industry & Commerce. In addition, it is included in the West Virginia Archives and History series list. A significant historical year for this entry is 1894. 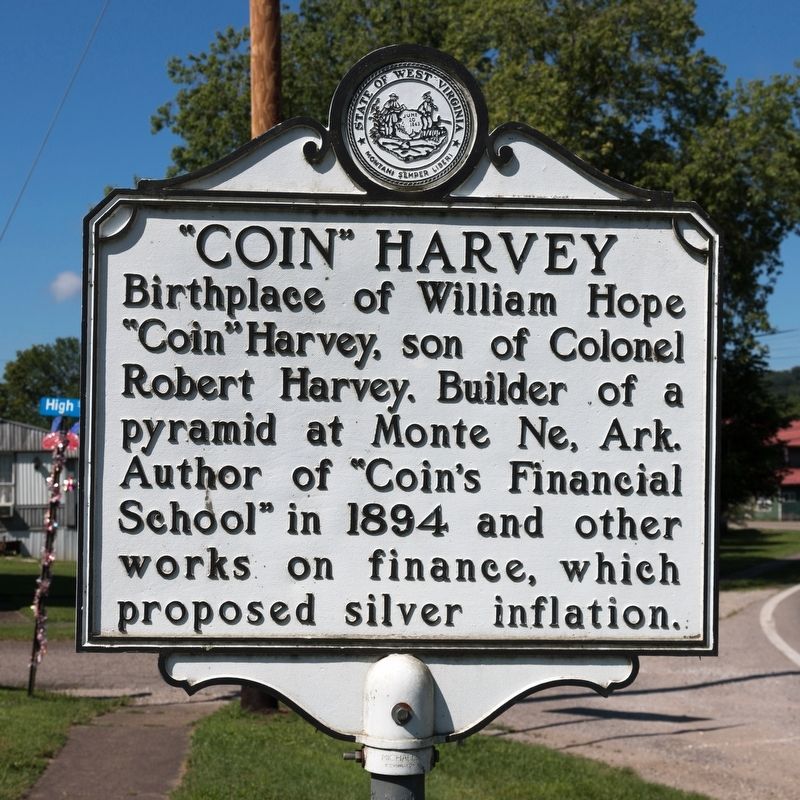 LAWNVALE (R), 37.3 m., a white farmhouse ( private ), with green shutters, and a dozen oddly assorted outbuildings are screened by a copse of oak and white pine. Lawnvale was the home of Dr. T. C. Atkeson (1852–1936), agriculturalist and educator, and the birthplace of his daughter, Mary Meek Atkeson, educator, author, and lecturer on country life.

Populist political activist
It was during his time in Colorado that Harvey became exposed to the idea that the demonetization of silver through passage of the Coinage Act of 1873 had extremely deleterious economic effects on the American economy, including the multiyear Long Depression of 1873 to 1879, the Depression of 1882 to 1885, recessions in 1887 and 1890, and the Panic of 1893. This entire era was marked by general deflation, tight money supply, 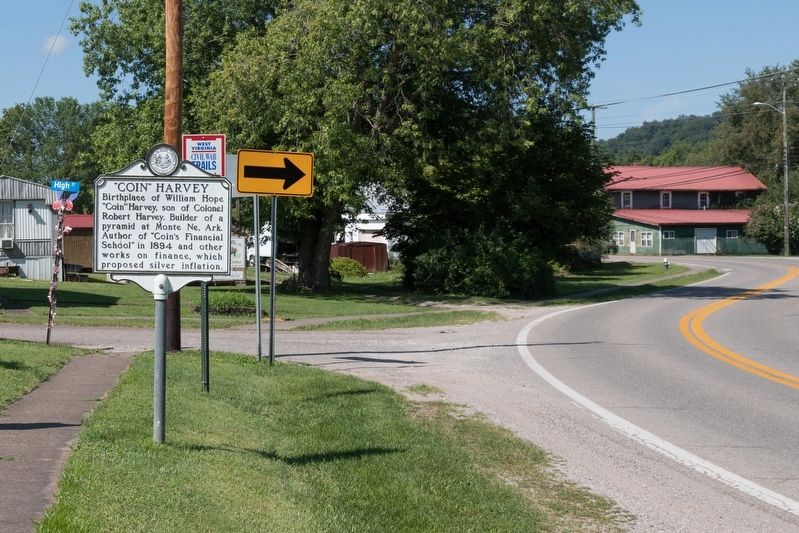 Photographed By J. J. Prats, July 13, 2019
3. “Lawnvale” / “Coin” Harvey Marker
This view is to the south.
mass bankruptcies, and unemployment, which many attributed to a lack of sufficient circulating currency to support the needs of industry and commerce.

Harvey became a leading advocate of a return to the unlimited coinage of silver into money, and in 1894 authored a popular pamphlet to advance this policy, Coin’s Financial School, which became an important ideological document of the nascent Populist movement. The massive circulation of this work made Harvey a public figure as one of the leading free silver advocates in America.

Monte Ne is an area in the Ozark hills of the White River valley east of Rogers, on the edge of Beaver Lake, in the US state of Arkansas. From 1901 until the mid-1930s the area was a health resort and ambitious planned community. It was owned and operated by William Hope Harvey, a financial theorist and one-time U.S. Presidential nominee. Two of its hotels, “Missouri Row” and “Oklahoma Row,” were the largest log buildings in the world.
...
The Monte Ne resort was not a financial success, due in part to Harvey’s failure to adequately manage the resort’s funds. All ventures associated with Harvey’s original Monte Ne concept either were never completed or experienced bankruptcy ...
...
By 1910, Harvey was facing serious setbacks. ... Harvey had begun reasoning that the end of civilization was at hand. In February 1920, he published 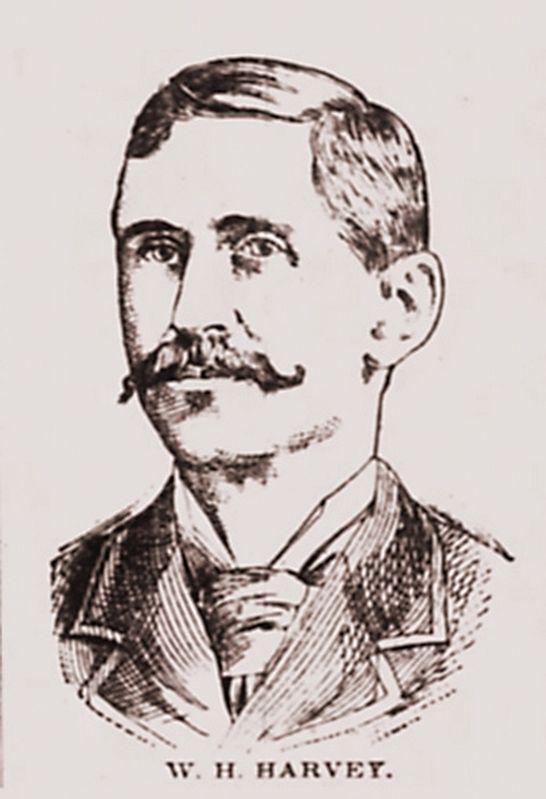 Newspaper illustration in the DeKalb Daily Chronicle. Via Wikipedia Commons, July 16, 1895
4. W. H. Harvey
Common Sense, in which Harvey announced his intention to leave a message for the future in the form of a pyramid. ... The total height would be 130 feet (40 m). In the pedestal there would be 300 square feet of floor space. Harvey’s books, explaining 20th-century civilization, as well as a world globe, a bible, encyclopedias, and newspapers, were to be placed inside two vaults and hermetically sealed in glass.
...
Following the Egyptian mania that gripped the country after the discovery of King Tut’s tomb in 1922, Harvey’s Pyramid project sparked a lot of interest and was widely reported throughout the U.S. Tens of thousands of people came to Monte Ne during the 1920s to see its progress. Harvey continued to raise funds from events held at the amphitheater, such as conventions.
...
The estimated cost of the Pyramid itself was $75,000, but Harvey exhausted his funds on construction of the amphitheater. The stock market crash of 1929 ended all construction. In a last-ditch effort to save the project, Harvey sent letters to wealthy men asking for funds to complete the project. In his letters he explained that civilization was dying and that only rich men, like the intended readers, could save it, if they could send money for his pyramid. Despite the fact that Harvey claimed his correspondence was “the most important letter ever written” he received no replies and the pyramid was never built. All that remains of the project is a retaining wall and the amphitheater that are under the waters 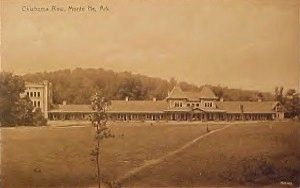 via Wikipedia Commons, circa 1910
5. Postcard: “Oklahoma Row, Monte Ne, Ark.”
of Beaver Lake most of the time.