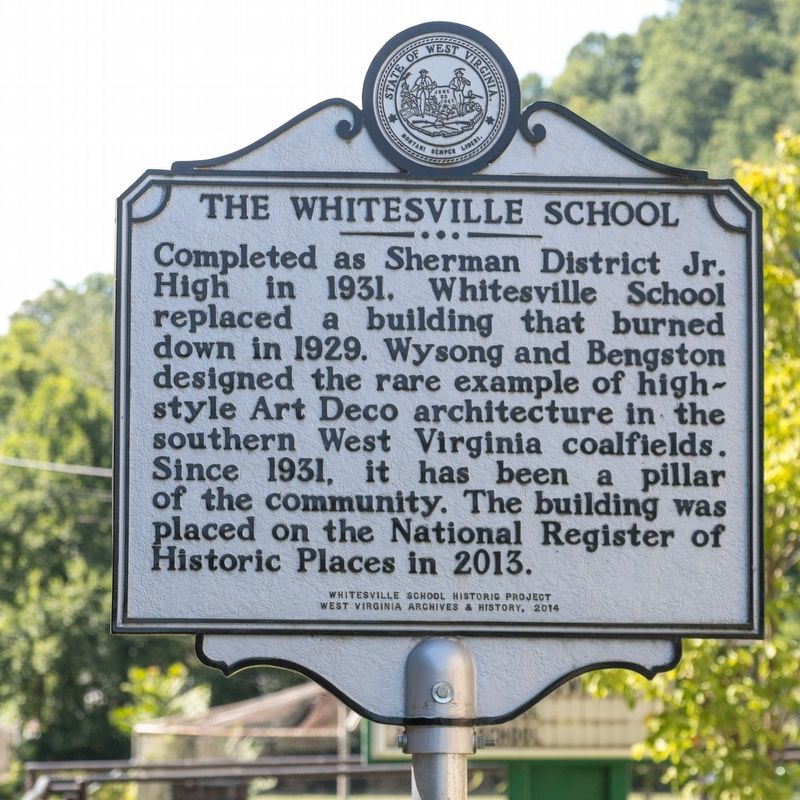 Completed as Sherman District Jr. High in 1931. Whitesville School replaced a building that burned down in 1929. Wysong and Bengston designed the rare example of high-style Art Deco architecture in the southern West Virginia coalfields. Since 1931, it has been a pillar of the community. The building was placed on the National Register of Historic Places in 2013.

Topics and series. This historical marker is listed in these topic lists: Architecture • Education. In addition, it is included in the Art Deco, and the West Virginia Archives and History series lists. A significant historical year for this entry is 1931.

Other nearby markers. At least 8 other markers are within 13 miles of this marker, measured as the crow 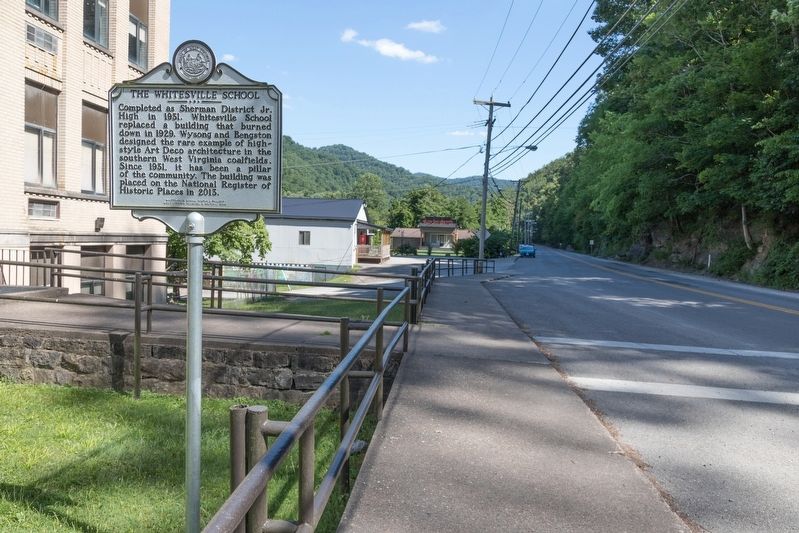 The main elevation of the school is symmetrical and emphasizes vertical parallel lines. It features two entrance areas that extend from the main elevation and upward through the roofline – a small-scale version of the massive, boxy towers popular on the large Art Deco-style buildings. At the corner of each “tower” is a large stepped pilaster, each topped with low-relief, deco-style brickwork. The entrances are located between the basement and first-story levels between the two pilasters. Each entryway is recessed and has modern double doors and a transom window and is flanked by smooth, fluted 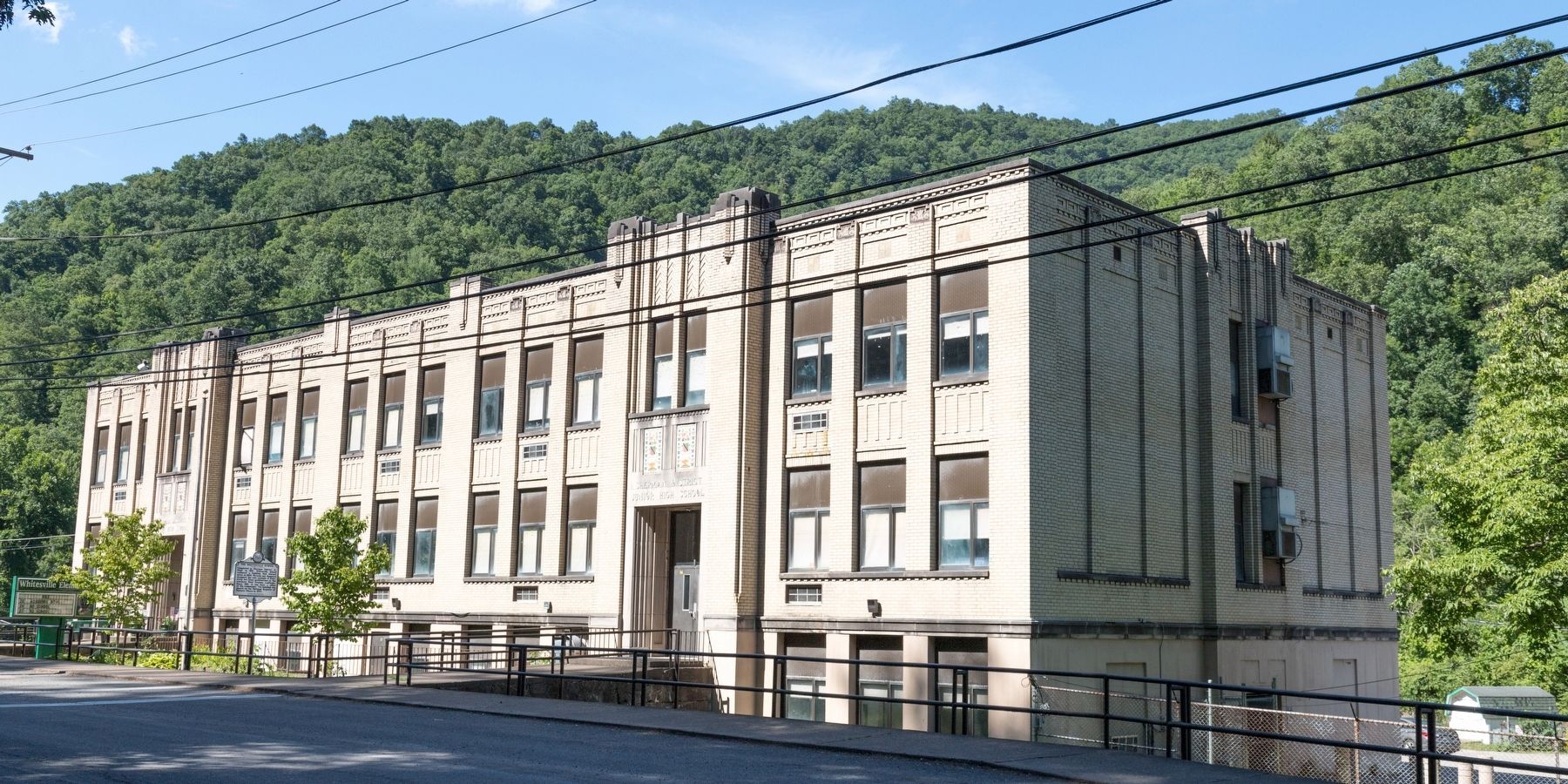 Photographed By J. J. Prats, July 13, 2019
3. The Whitesville School
limestone. The smooth limestone is carried upward to the stone sill and dentils of the two second-story windows. Two sets of colorful tiles are situated in this area and are flanked by limestone reeding. The tiles feature academic symbols of Greek icons including the academic lamp of knowledge, pen and quill, an open book, and a shield. The uppermost mosaic includes a banner that reads “1931,” indicating the construction year of the school (see photo 3). The original name of the school, “Sherman District Junior High School,” is displayed in metal lettering between the recessed entrance and the tiles. The area above the two windows, between the pilasters, displays chevron-style brickwork.

The remainder of the main elevation includes five separate sections; three centrally located between the towers and one section to the outside of each entrance tower. Each section includes a set of three windows, symmetrically arranged, on each the basement, first and second stories. The windows on the first and second stories are separated by a low-relief, brick pilaster each topped with a decorative stone keystone displaying a shield and scrolls. Stone window sills under the first and second story windows on the main elevation are accented with dentils while lintels are formed by a row of soldier bricks (a row of bricks laid vertically with the long, narrow side exposed). The 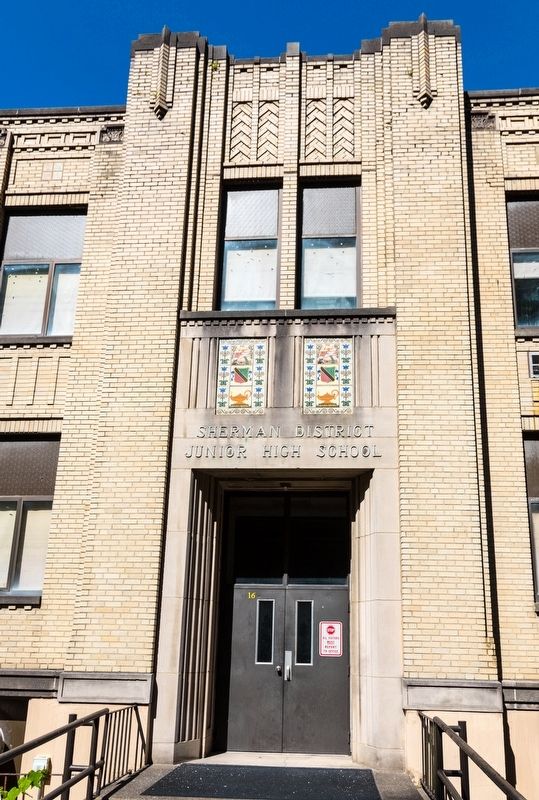 Photographed By J. J. Prats, July 13, 2019
4. Whitesville School Entrance Tower
area between the first and second story windows, between the pilasters, is accented with parallel lines formed by stack bonding with projecting rows of headers, while the cornice area is accented with deco-style square tiles and brickwork. The three central sections are separated by two larger pilasters that extend through the roofline, similar to those on the towers. 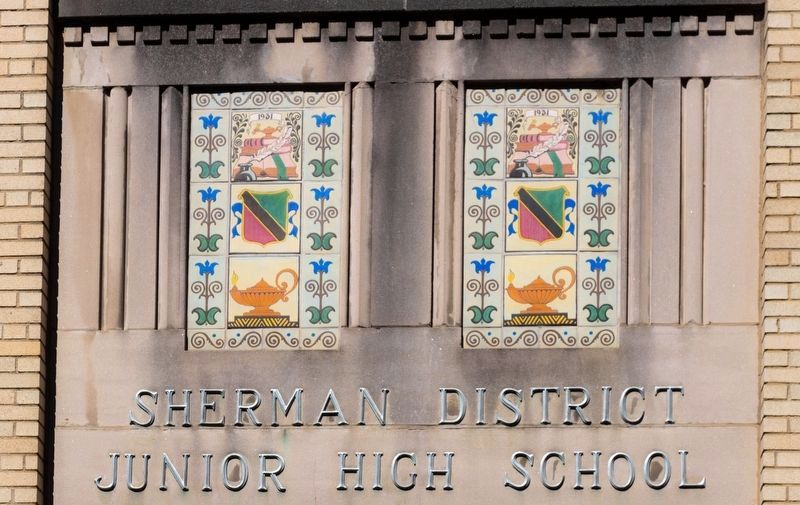 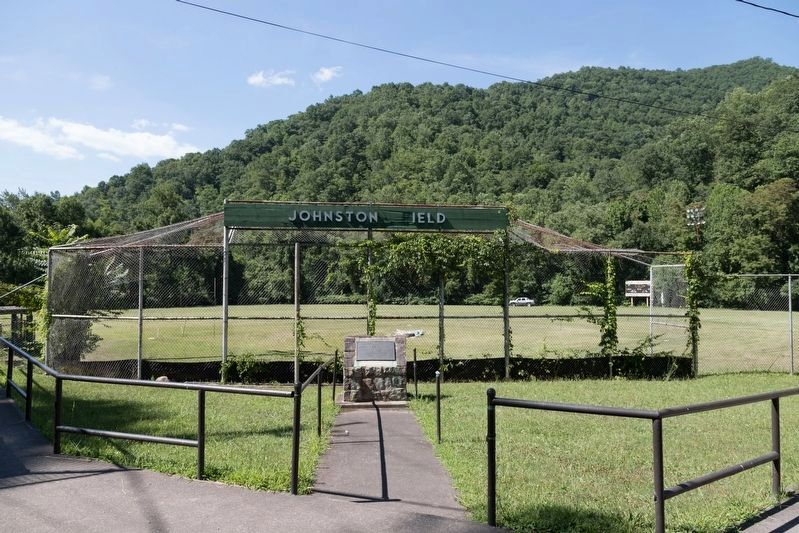 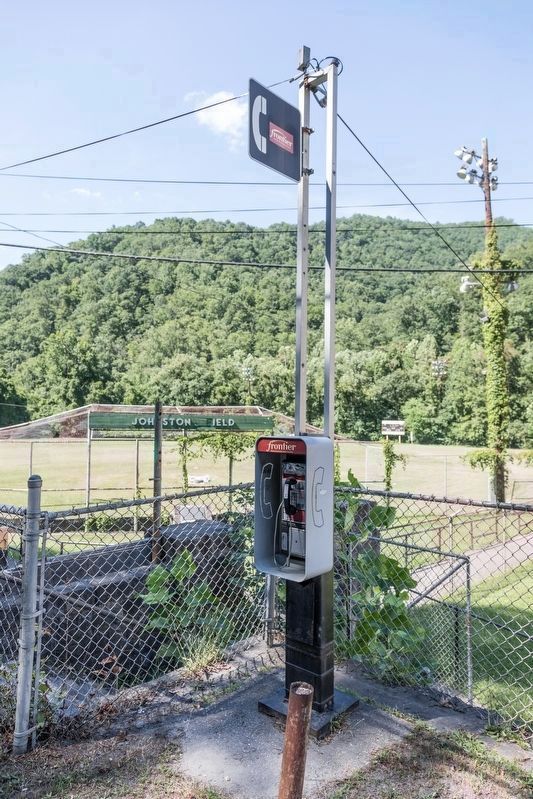